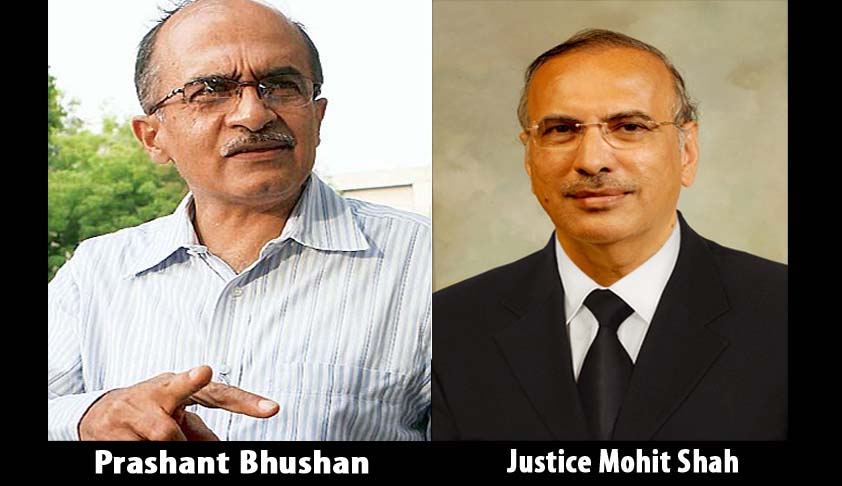 Reacting to Senior Advocate Dushyant Dave’s letter to Chief Justice of India against the proposal to elevate Bombay High Court Chief Justice Mohit Shah, Activist lawyer Prashant Bhushan told Live Law that "The reported proposal to elevate Justice Mohit Shah to the Supreme Court is strange and shocking in the light of his reported rejection by the previous collegium on the ground of unfitness, and also because there is clear evidence of gross Judicial impropriety on his part in the case of Essar Oil, while he was in Gujarat"

President of Supreme Court Bar Association Senior Advocate Dushyan Dave in his letters to CJI made serious allegations against Justice Mohit Shah . He alleges that the trial of BJP leader Amit Shah in the Sohrabuddin fake encounter case, the Bombay High Court, with Justice Shah as the Chief Justice did not follow the mandate of the Supreme Court that the “trial should be conducted from beginning to the end by the same officer”.

The letter asserts that, “the Learned Trial Judge was changed on one pretext or the other three or four times without seeking leave of this Hon’ble Court. Ultimately, what happened is well known. I am not on merits of a Judicial Order that may have been passed in favor of Mr. Amit Shah, but on the act of commission or omission on the part of Chief Justice Mr. Mohit S. Shah as Head of the Bombay High Court. Any reconsideration at this stage of his case would perhaps raise serious and justifiable doubts in the minds of right thinking citizens. It is one thing for the political establishment to reward a Judge by offering him the Governorship but it is entirely different for the Collegium to do so. I respectfully request that this ought to be avoided in larger interests of the Judiciary.”

“In another decision in Ravindra Pal Singh v. Santosh Kumar Jaiswal and others, 2011 (4) SCC 746, this Court directed for transfer of the case outside State because some of the accused in a case of fake encounter were policemen. The case in hand has far more stronger reasons for being transferred outside the State. We, accordingly, direct for the transfer of Special Case No.05/2010 pending in the court of Additional Chief Metropolitan Magistrate, CBI, Court Room No.2, Mirzapur, Ahmedabad titled CBI versus D.G. Vanzara & Others to the court of CBI, Bombay. The Registrar General of the Gujarat High Court is directed to collect the entire record of the case from the court of Additional Chief Metropolitan Magistrate, CBI, Room No.2, Mirzapur, Ahmedabad and to transmit it to the Registry of the Bombay High Court from where it would be sent to a CBI court as may be decided by the Administrative Committee of the High Court. The Administrative Committee would assign the case to a court where the trial may be concluded judiciously, in accordance with law, and without any delay. The Administrative Committee would also ensure that the trial should be conducted from beginning to end by the same officer.”