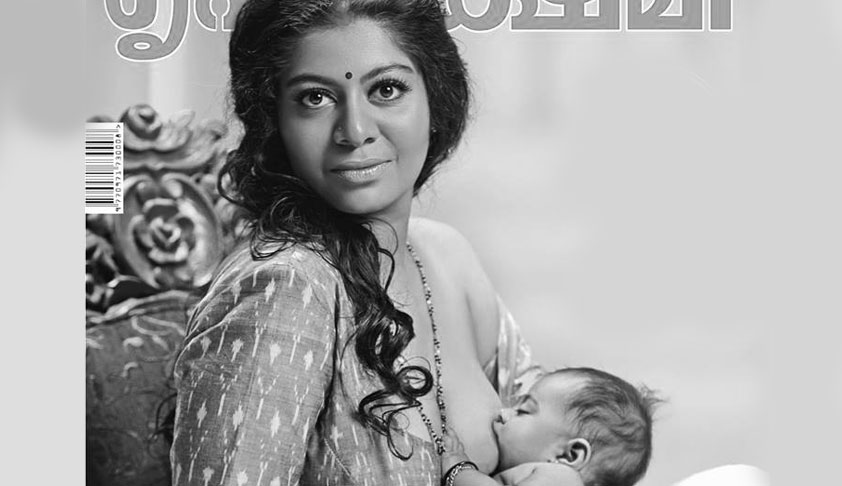 A criminal case under the Indecent Representation of Women Act has been filed against ‘Grihalakshmi’ magazine for publishing the picture of a breastfeeding woman in the cover page of its latest edition.

The cover page of the Malayalam magazine shows a woman breastfeeding a baby, with the caption “Mothers tell Kerala :- Don’t stare, we want to breastfeed”. From the cover page it appears that the magazine edition features a campaign for the right to breastfeed in public without shame and unwanted male attention. The picture has garnered a lot of attention, and has been reported even in international media.

The criminal complaint has been filed in the Court of Chief Judicial Magistrate, Kollam, by Advocate  Vinod Mathew Wilson. It is alleged in the complaint that the picture is lascivious in nature, appealing to prurient interests and tends to degrade the dignity of womanhood. Therefore, the complaint alleges commission of offences punishable under Sections 3 and 4 of the Indecent Representation of Women(Prohibition) Act, 1986. According to Section 2(c) of the Act, “indecent representation of women” means the depiction in any manner of the figure of a woman, her form or body or any part thereof in such a way as to have the effect of being indecent, or derogatory to, or denigrating, women, or is likely to deprave, corrupt or injure the public morality or morals.

The Managing Director of Mathrubhoomi publications P.V Gangadharan,  the Managing Editor of Grihalakshmi P.V Chandran, the Editor-in-charge M.P Gopinath are made accused in the complaint, apart from Gilu Joseph, the model who figured in the cover picture.

A German magazine by name “STERN”  having  worldwide  circulation published an article with  a  picture  of  Boris  Becker,  a  world renowned Tennis player, posing nude with his  dark-skinned  fiancée by name Barbara Feltus, a film actress, which was  photographed  by none other than  her  father.   The  article  states  that,  in  an interview, both Boris Becker and Barbaba Feltus spoke freely  about their engagement, their lives and future plans and the message they wanted to convey to the people at  large,  for  posing  to  such photograph. Article picturised Boris Becker as a strident protester of the pernicious practice of “Apartheid”. Further, it was stated that the purpose of the photograph was also to signify that love champions over hatred.

“Sports World”,  a  widely  circulated  magazine  published  in  India reproduced the article and the photograph as cover story  in  its  Issue  15 dated 05.05.1993 with the caption “Posing nude dropping out of tournaments, battling Racism in Germany. Boris Becker explains his recent approach to life” – Boris Becker Unmasked. Anandabazar Patrika, a newspaper having wide circulation  in  Kolkata, also published in the second  page  of  the  newspaper  the  above-mentioned photograph as well as the article on 06.05.1993, as appeared in  the  Sports World.

A lawyer practicing at Alipore Judge’s Court, Kolkata, claimed to  be a regular reader of Sports World as well  as  Anandabazar  Patrika  filed  a complaint under Section 292 of the Indian Penal Code against the  Appellants herein, the Editor, Publisher and Printer of the  newspaper  as  well as against the Editor of the Sports World, former Captain of Indian  Cricket Team,  late  Mansoor  Ali  Khan  of  Pataudi,  before   the   Sub-Divisional Magistrate at Alipore.  Complaint stated that  as  an  experienced  Advocate and an elderly person, he could vouchsafe that the nude photograph  appeared in the Anandabazar Patrika, as well as in the Sports  World,  would  corrupt young minds, both children and youth of this country,  and  is  against  the cultural and moral values of  our  society.   The  complainant  stated  that unless such types  of  obscene  photographs  are  censured  and  banned  and accused persons are punished, the dignity and honour of our womanhood  would be  in  jeopardy. The Magistrate held  the  accused  persons  to  be examined under Section 251 Cr.P.C. and ordered that they would  be  put  to face  the  trial  for  the  offence  punishable  under  Section   292   IPC alternatively under Section 4  of  the  Indecent  Representation  of  Women (Prohibition) Act, 1986.

Aggrieved by this accused persons preferred a Criminal Revision No.1591 of 1994 before the High Court of Calcutta under Section 482  Cr.P.C. for quashing the proceedings in Case No.C.796 of 1993 (corresponding to  T.R.  No.35 of 1994) pending before the learned Judicial Magistrate Court, Alipore. The High Court, however, did not appreciate all those contentions and declined to quash the proceedings under Section 482 Cr.P.C. Accused persons then preferred an appeal to The Supreme Court against the Order of The High Court.

The Supreme Court has quashed the Case against the accused persons and held that that a picture of a nude/semi-nude woman, as such, cannot per se be called obscene unless it has the tendency to arouse feeling or revealing an overt sexual desire. The Bench was hearing an appeal against the High Court Order which refused to quash criminal proceedings initiated against the publication of said picture.

Allowing the appeal the Supreme Court held as follows;

"We have to examine whether the photograph of Boris  Becker  with  his fiancée Barbara Fultus, a dark-skinned lady standing close  to  each  other bare bodied but covering the breast of his fiancée with his  hands  can  be stated to be objectionable in  the  sense  it  violates  Section  292  IPC.

Applying the community tolerance test, we are not prepared to  say  such  a photograph is suggestive of deprave minds and  designed  to  excite  sexual passion in persons who are likely to look at them and see them, which would depend upon the particular posture and background in  which  the  woman  is depicted or shown.   Breast of Barbara Fultus has been fully covered with the arm of Boris Becker, a photograph, of course, semi-nude, but taken by none other than the father of Barbara.  Further, the photograph, in  our view, has no tendency to deprave or corrupt the minds of  people  in  whose hands the magazine Sports World or Anandabazar Patrika would fall.

We may also indicate that the said picture has to be viewed in the background in which it was shown, and the message it has to convey to the public and the world at large.  The cover story of the Magazine carries the title, posing nude, dropping of harassment, battling racism in Germany. Boris Becker himself in the  article  published  in  the  German  magazine, speaks of the racial discrimination prevalent in Germany  and  the  article highlights Boris Becker’s  protests  against  racism  in  Germany.    Boris Becker himself puts it, as quoted in the said article:

“The nude photos were supposed to shock, no doubt about it....... What I am saying with these photos is that an inter-racial relationship is okay.”

The message, the photograph wants to convey is that the colour of skin matters little and love champions over colour.   Picture promotes love affair, leading to a marriage, between a white-skinned man and a black skinned woman.

We should, therefore, appreciate the photograph and the article in the light of the message it wants to convey, that is to eradicate the evil of racism and apartheid in the society and to promote love and marriage between white skinned man and a black skinned woman.   When viewed in that angle, we are not prepared to say that the picture or the article which was reproduced by Sports World and  the  Anandabazar  Patrika  be  said  to  be objectionable so as to initiate proceedings under Section 292 IPC or  under Section 4 of the Indecent Representation of Women (Prohibition) Act, 1986.

We have found that no offence has been committed under Section 292 IPC and then the question whether it falls in the first part of Section 79 IPC has become academic.  We are sorry to note that the learned Magistrate, without proper application of mind or appreciation of background in which the photograph has been shown, proposed to initiate prosecution proceedings against the Appellants. Learned Magistrate should have exercised his wisdom on the basis of judicial precedents in the event of which he would not have ordered the Appellants to face the trial.  The High Court, in our view, should have exercised powers under Section 482 Cr.P.C. to secure the ends of justice"