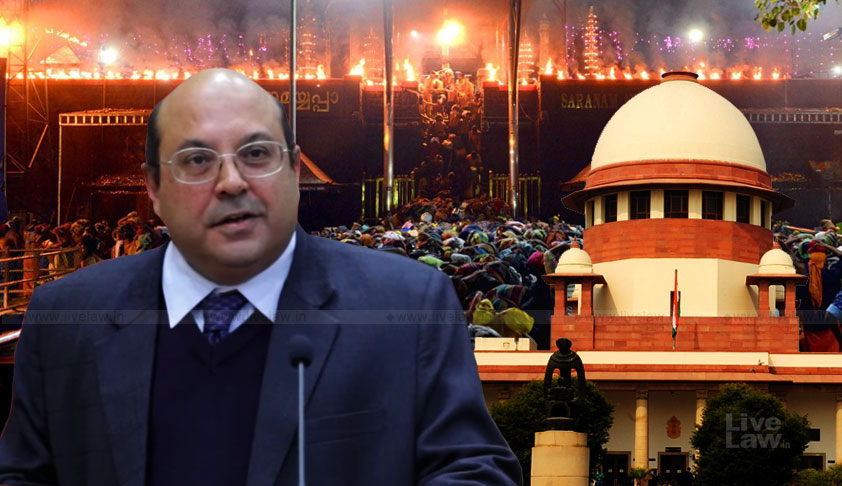 The judgment of Justice R F Nariman in the Sabarimala temple entry case held that the customs and usages of Sabarimala temple must yield to the fundamental right of women to worship in the temple. Although the rights claimed by the Thantri and the believers in the custom of the temple have protection under Article 25(1), the right of a woman believer is also protected under Article 25(1), and...

The judgment of Justice R F Nariman in the Sabarimala temple entry case held that the customs and usages of Sabarimala temple must yield to the fundamental right of women to worship in the temple. Although the rights claimed by the Thantri and the believers in the custom of the temple have protection under Article 25(1), the right of a woman believer is also protected under Article 25(1), and her right should prevail over the right to maintain the exclusionary custom - this was, in essence, the judgment of Justice Nariman.

"Also, the argument that such women can worship at the other Ayyappa temples is no answer to the denial of their fundamental right to practice religion as they see it, which includes their right to worship at any temple of their choice. On this ground also, the right to practice religion, as claimed by the Thanthris and worshippers, must be balanced with and must yield to the fundamental right of women between the ages of 10 and 50, who are completely barred from entering the temple at Sabarimala, based on the biological ground of menstruation" (paragraph 29, Justice Nariman's judgment)

The judgment also noted that Section 3 of the Kerala Hindu Places of Public Worship (Authorisation of Entry) Act, 1965 declared that every place of public worship of Hindus is open to all sections and classes of Hindus. The section had an overriding effect on contrary customs and usages. It was held that this Section had the protection of Article 25(2)(b) of the Constitution of India, which enabled State to enact law to throw open all Hindu religious institutions of public character to all sections and classes of Hindus. Therefore, the custom in Sabarimala temple,which barred entry of women between the age of 10 and 50, was held to be hit by Section 3 of the Act.

The judgment examined the validity of Rule 3(b) of the Kerala Hindu Places of Public Worship (Authorisation of Entry) Rules, 1965, which held that entry of women in temples is barred at such time during which they are not allowed by custom and usage to enter a place of public worship. This Rule was held to be contrary to Section 3 of the parent Act. The Rule was  also found to be violative of Articles 15(1) and 25(1) of the Constitution.

Sabarimala Temple Has No Denominational Status

It was held that Sabarimala temple cannot claim status of a religious denomination to claim rights under Article 26 of the Constitution.Three things were stated as necessary in order to establish that a particular temple belongs to a religious denomination - the temple must consist of persons who have a common faith, a common organization, and are designated by a distinct name, as held in S.P. Mittal v. Union of India and Ors.

It was held that no answers could be found for the query whether Thanthris and worshippers alike are designated by a distinct name. The judgment noted that it was open to followers of any religion to visit Sabarimala. "They can therefore be regarded, as has been held in Sri Adi Visheshwara as Hindus who worship the idol of Lord Ayyappa as part of the Hindu religious form of worship but not as denominational worshippers", said Justice Nariman.

Reference was placed on decision in Durgah Committee, Ajmer v. Syed Hussain Ali,, where Court had held that since persons of all religious faiths visit the Ajmer Durgah as a place of pilgrimage, it may not be easy to hold that they constitute a religious denomination.

"In these circumstances, we are clearly of the view that there is no distinctive name given to the worshippers of this particular temple;there is no common faith in the sense of a belief common to a particular religion or section thereof; or common organization of the worshippers of the Sabarimala temple so as to constitute the said temple into a religious denomination. Also, there are over a thousand other Ayyappa temples in which the deity is worshipped by practising Hindus of all kinds. It is clear, therefore, that Article 26 does not get attracted to the facts of this case" (paragraph 27)

Based on the affidavit filed by the Thanthri, Justice Nariman noted that two reasons were given in support of ban of entry of women between the age of 10 and 50 - that women cannot perform 41 days of vratham due to physiological factors, and presence of women will affect the celibacy of deity. The judgment did not venture to examine the merits of these reasons, and proceeded on the assumption that the temple custom was an essential practise. However, it was held that this practise was hit by Article 15(1), Article 25(1) of women worshippers and also Section 3 of the Kerala Act.

The respondents and intervenors had raised a preliminary objection to the maintainability of PIL, pointing out that no woman devotee of Lord Ayyappa had approached the Court. This objection was rejected, holding :

The present case raises grave issues relating to women generally, who happen to be between the ages of 10 to 50, and are not allowed entry into the temple at Sabarimala on the ground of a physiological or biological function which is common to all women between those ages. Since this matter raises far-reaching consequences relating to Articles 25 and 26 of the Constitution of India, we have found it necessary to decide this matter on merits. Consequently, this technical plea cannot stand in the way of a constitutional court applying constitutional principles to the case at hand.

The objection that Court should not adjudicate the matter as the existence and essentiality of custom was a matter of evidence was also overruled. It was held that evidence in form of affidavits of parties, including the thantri, was on record and that was sufficient for the Court to dispose of the case.