[Sabarimala] [Day-6] Lord Ayyappa Is A 'Legal Person' And Entitled To Maintain The ‘Perpetual Celibate’ Status Under The Right To Privacy Under Article 21, Argues Adv. Sai Deepak 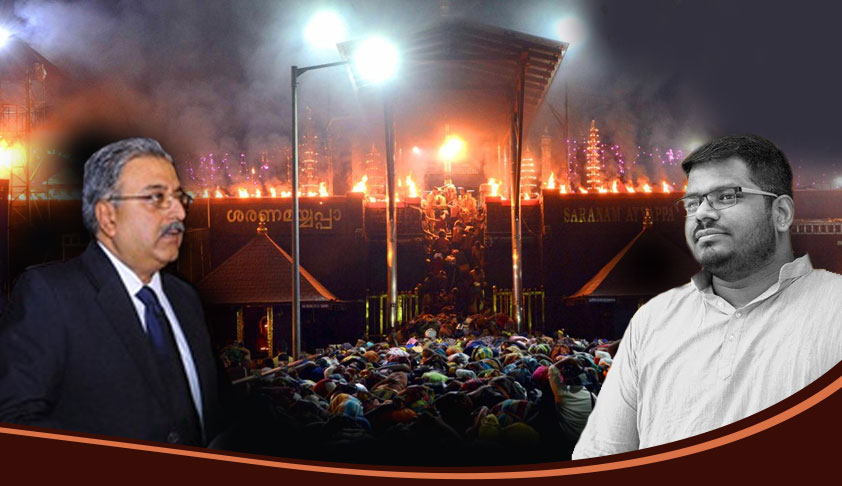 As the hearing in the Sabarimala Temple entry case entered into its sixth day, Senior Counsel K. Radhakrishnan questioned the integrity of the petitioner in seeking to disturb the age-old custom of menstruating women between the ages of 10 and 50 years abstaining from participating in the pilgrimage.Appearing on behalf of the Pandalam Royal Family, he imputed malafide intention to the...

As the hearing in the Sabarimala Temple entry case entered into its sixth day, Senior Counsel K. Radhakrishnan questioned the integrity of the petitioner in seeking to disturb the age-old custom of menstruating women between the ages of 10 and 50 years abstaining from participating in the pilgrimage.

Appearing on behalf of the Pandalam Royal Family, he imputed malafide intention to the petitioner in attacking the Hindu beliefs and practices and attempting to demolish a dimension of the religion and the glory of the Temple.

Contending that the petitioner body does not represent the ardent faith of the devotees of Lord Ayyappa, he expressed doubts regarding the credibility of the petition before the Supreme Court five-judge bench. He commented that such publicity-seeking litigants may in the future also challenge that Lord Ganesha was the offspring of Lord Shiva and Goddess Parvati.

Mr. Radhakrishnan submitted that though the impugned Rule 3(b) of the Kerala Hindu Places of Worship (Authorisation of Entry) Rules Was a relatively new development, women of child-bearing age have abstained from accessing the Temple since its inception. This, he advanced, was in reverence of the character of the deity, in respecting the will of Lord Ayyappa that all worshippers perform the ‘tapasya’ or penance for 41 days before embarking on the pilgrimage.

He explained the purpose of the 18 divine steps to the sanctum of the Sabarimala Temple which every pilgrim is to lay his feet on as well as the irumudikkettu to be carried on the head.

He suggested that the right to freely practice one’s religion under Article 25(1), which the sub-clause requires to be exercised subject to ‘morality’, should in fact be subject to ‘public morality’. It was his submission that constitutional morality cannot be accorded superiority over the morality of the society and that of the religious institution.

He argued that the power of the State under Article 25(2) does not apply to the ritualistic practices of religious institutions but is confined to the point of secularism.

On Wednesday, the discussion had veered towards the ambit of Article 25(2)(b) and if it could be so interpreted to extend its protection to women.

When the Senior Counsel contended that women generally restrain themselves from visiting even other temples during the monthly menstrual cycle, the bench remarked that there is no discrimination if the restriction is voluntary and self-imposed.

When Mr. Radhakrishnan sought to refer to a medical report to depict how women are physiologically not capable of observing the 41 day penance, Chief Justice Dipak Misra asserted that submissions be confined to legal issues.

Next, Senior Advocate V. Giri, representing the ‘Thanthri’ or the arch-priest of the Sabarimala Temple, suggested that idol-worship is an essential or integral part of the Hindu religion.

He threw light on the belief that upon the establishment of an idol, life is infused into it, which flourishes with the continuous offering of prayers in the manner stipulated in the ‘Shastras’ or religious authorities.

It was his submission that each idol possesses a unique nature, a special character, which has its roots in the religion, and each temple accordingly observes distinct traditions and rituals, which are respected and followed by reasonable devotees.

Mr. Giri advanced that in order to assert the right under Article 25(1), the petitioners must accept the nature of the deity at the Sabarimala Temple, of Lord Ayyappa in His ‘Naishtika Brahmacharya’ or ‘perpetual celibate’ form. He argued that access to the Temple to pursue their right to practice their religion could not be claimed in stark contrast to the beliefs of the Temple.

He remarked that the object of going to a place of worship is to strengthen one’s faith and not to criticise or doubt the beliefs that have existed since times immemorial.

He also submitted that the Kerala High Court in S. Mahendran v. Secretary, Travancore Devaswom Board, in upholding the ban on the entry of women, had accepted the ‘Thanthri’ to be the final authority in deciding such religious and spiritual controversies pertaining to the Temple.

Mr. Giri was succeeded by Advocate Sai Deepak, appearing for the intervenor organisation ‘People for Dharma’. He asserted that the worshippers of Lord Ayyappa, irrespective of their religion, qualify as a ‘denomination’ for the purpose of Article 26.

It was his contention that the religion of the devotee is irrelevant so long as there is faith in the deity. Countering this argument, Justice Rohinton Nariman noted that the terminology in Article 26 being ‘religious denomination’, it is necessary for such an association to vow allegiance to a particular religion. The judge cited the example of the Ajmer Sharif Durgah and how the Chishti Sufis constitute a separate denominational order.

The hearing on Thursday witnessed the counsel advance an interesting argument that a deity, having a distinct legal personality, was entitled to the rights under Articles 21, 25 and 26. He suggested that Lord Ayyappa’s right to maintain his ‘perpetual celibate’ status was covered under the right to privacy under Article 21.

He rebutted the notion that the entry of women is restricted owing to the impurity which is believed to be produced by menstruation. In this context, he mentioned the instance of the Kamakhya Temple of Assam, which celebrates the process of menstruation, with the deity of the temple being revered as ‘The Bleeding Goddess’. However, he submitted that a worshipper cannot claim rights conflicting with the customs and ritualistic practices of the place of worship.

This statement was met with contradictions from the bench, with Justice Chandrachud noting that regardless of the ‘essentiality’ of a practice to the religion, discrimination cannot be allowed in violation of the basic structure of the constitution.

Chief Justice Misra also observed that the right to regulate religious affairs could not scale to the height of discriminating on account of the biological attributes of women belonging to a particular age bracket, while Justice Nariman noted that such a right would have to be conditioned on the Fundamental Rights of the public.

When the advocate sought to justify the independence of the Temple to pursue the practice of exclusion by indicating that the Sabarimala Temple does not procure any state funding, the Chief Justice remarked that the only question was if the Temple is a public place, in which case noone could be prohibited from offering prayers to the deity.

Finally, Senior Counsel Kailashnath Pillai urged that the issue at hand involving a pre-constitutional custom, the court appreciate the evidence of its origin, existence and its interrelationship with other customs.

It was his plea that the bench not allow itself to be guided exclusively by Kelsen’s Pure Law Theory in interpreting the Constitution and exercising judicial review in religious affairs.

He stated that an ignorance of the realities of societal or popular morality in the India scenario could give rise to disputes in Kerala akin to the Ram Janmabhumi-Babri Masjid controversy.