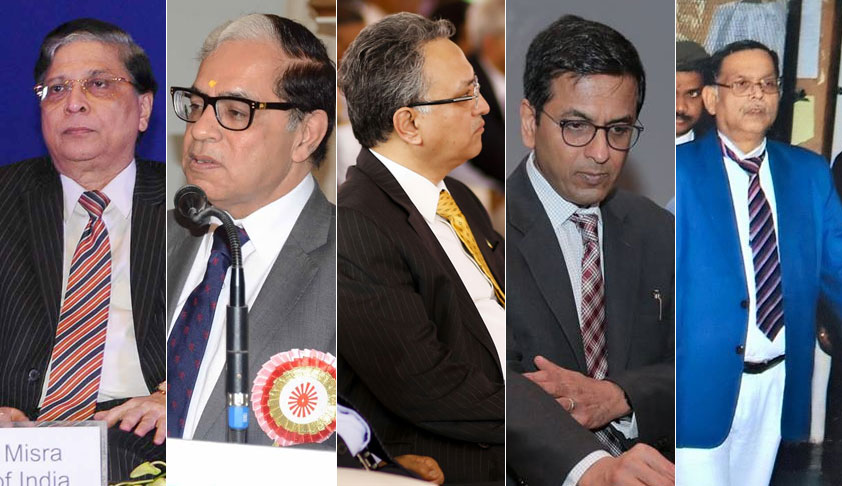 A Five Judge Constitution Bench of the Supreme Court on Tuesday issued guidelines on fixation of future prospects for deciding compensation in motor accident claims.The Bench comprising of Chief Justice Dipak Misra and Justices AK Sikri, AM Khanwilkar, Dr. DY Chandrachud and Ashok Bhushan was hearing a reference by a two Judge Bench in in National Insurance Company Limited v. Pushpa and others...

A Five Judge Constitution Bench of the Supreme Court on Tuesday issued guidelines on fixation of future prospects for deciding compensation in motor accident claims.

The Bench comprising of Chief Justice Dipak Misra and Justices AK Sikri, AM Khanwilkar, Dr. DY Chandrachud and Ashok Bhushan was hearing a reference by a two Judge Bench in in National Insurance Company Limited v. Pushpa and others to resolve the conflicting opinion between the three Judge Bench Judgments in Reshma Kumari and others v. Madan Mohan and another and Rajesh and others v. Rajbir Singh and others.

The seminal controversy before the Court was, “where the deceased was self-employed or was a person on fixed salary without provision for annual increment, etc., what should be the addition as regards the future prospects”.

The Bench observed that Section 168 of the Act deals with the concept of “just compensation” and the same has to be determined on the foundation of fairness, reasonableness and equitability on acceptable legal standard because such determination can never be in arithmetical exactitude.

“It can never be perfect. The aim is to achieve an acceptable degree of proximity to arithmetical precision on the basis of materials brought on record in an individual case. The conception of “just compensation” has to be viewed through the prism of fairness, reasonableness and non-violation of the principle of equitability. In a case of death, the legal heirs of the claimants cannot expect a windfall. Simultaneously, the compensation granted cannot be an apology for compensation. It cannot be a pittance. Though the discretion vested in the tribunal is quite wide, yet it is obligatory on the part of the tribunal to be guided by the expression, that is, “just compensation””.

According to the bench, the determination has to be on the foundation of evidence brought on record as regards the age and income of the deceased and thereafter the apposite multiplier to be applied.

“The age and income, as stated earlier, have to be established by adducing evidence. The tribunal and the Courts have to bear in mind that the basic principle lies in pragmatic computation which is in proximity to reality. It is a well-accepted norm that money cannot substitute a life lost but an effort has to be made for grant of just compensation having uniformity of approach. There has to be a balance between the two extremes, that is, a windfall and the pittance, a bonanza and the modicum. In such an adjudication, the duty of the tribunal and the Courts is difficult and hence, an endeavour has been made by this Court for standardization which in its ambit includes addition of future prospects on the proven income at present. As far as future prospects are concerned, there has been standardization keeping in view the principle of certainty, stability and consistency. We approve the principle of “standardization” so that a specific and certain multiplicand is determined for applying the multiplier on the basis of age”.

The Court observed that if it accepts the principle of standardization, there is really no rationale not to apply the said principle to the self-employed or a person who is on a fixed  salary.

“To follow the doctrine of actual income at the time of death and not to add any amount with regard to future prospects to the income for the purpose of determination of multiplicand would be unjust. The determination of income while computing compensation has to include future prospects so that the method will come within the ambit and sweep of just compensation as postulated under Section 168 of the Act”.

The Bench observed that in case of a deceased who had held a permanent job with inbuilt grant of annual increment, there is an acceptable certainty.

“The purchasing capacity of a salaried person on permanent job when increases because of grant of increments and pay revision or for some other change in service conditions, there is always a  competing attitude in the private sector to enhance the salary to get better efficiency from the employees. Similarly, a person who is self-employed is bound to garner his resources and raise his charges/fees so that he can live with same facilities. To have the perception that he is likely to remain static and his income to remain stagnant is contrary to the fundamental concept of human attitude which always intends to live with dynamism and move and change with the time. Though it may seem appropriate that there cannot be certainty in addition of future prospects to the existing income unlike in the case of a person having a permanent job, yet the said perception does not really deserve acceptance. We are inclined to think that there can be some degree of difference as regards the percentage that is meant for or applied to in respect of the legal representatives who claim on behalf of the deceased who had a permanent job than a person who is self-employed or on a fixed salary. But not to apply the principle of standardization on the foundation of perceived lack of certainty would tantamount to remaining oblivious to the marrows of ground reality. And, therefore, degree-test is imperative. Unless the degree-test is applied and left to the parties to adduce evidence to establish, it would be unfair and inequitable. The degree-test has to have the inbuilt concept of percentage. Taking into consideration the cumulative factors, namely, passage of time, the changing society, escalation of price, the change in price index, the human attitude to follow a particular pattern of life, etc., an addition of 40% of the established income of the deceased towards future prospects and where the deceased was below 40 years an addition of 25% where the deceased was between the age of 40 to 50 years would be reasonable”.

“When a person is in a permanent job, there is always an enhancement due to one reason or the other. To lay down as a thumb rule that there will be no addition after 50 years will be an unacceptable concept. We are disposed to think, there should be an addition of 15% if the deceased is between the age of 50 to 60 years and there should be no addition thereafter. Similarly, in case of self-employed or person on fixed salary, the addition should be 10% 47 between the age of 50 to 60 years. The aforesaid yardstick has been fixed so that there can be consistency in the approach by the tribunals and the courts”.

(v) For determination of the multiplicand, the deduction for personal and living expenses, the tribunals and the courts shall be guided by paragraphs 30 to 32 of Sarla Verma which we have reproduced hereinbefore. (vi) The selection of multiplier shall be as indicated in the Table in Sarla Verma read with paragraph 42 of that judgment. (vii) The age of the deceased should be the basis for applying the multiplier. 49

(viii) Reasonable figures on conventional heads, namely, loss of estate, loss of consortium and funeral expenses should be Rs. 15,000/-, Rs. 40,000/- and Rs. 15,000/- respectively. The aforesaid amounts should be enhanced at the rate of 10% in every three years.