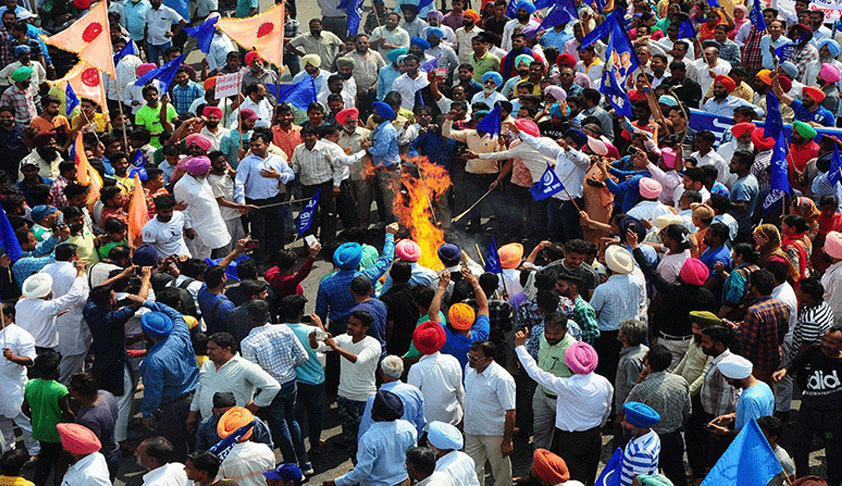 The Supreme Court bench of Chief Justice Ranjan Gogoi and Justice S. K. Kaul on Tuesday dismissed a PIL seeking a direction that the politicians, who were allegedly behind the massive unrest across the country fueled by the March 20 verdict of the apex court in Dr. Subhash Kashinath Mahajan v. State of Maharashtra diluting the SC/ST Act of 1989, account for the losses and damage to public property so sustained.

“Who are you?”, the Chief Justice sought to know petitioner Bijon Kumar Misha’s credentials from his counsel.

When the Advocate replied that the petitioner was a social worker, Chief Justice Gogoi expressed surprise at the irrationality of the prayer for a direction to immediately restrain the concerned politicians from taking part in the proceedings of the legislature and to stay their remuneration.

“What social work? There was some rioting over some Supreme Court verdict and you want us to say that politicians must not attend the Parliament or the (Legislative) Assembly and that they must not be paid till the CBI inquiry is over?

"You want them to account for and compensate for the losses and the damages to property? Did they take part in the rioting? What are these prayers? What has the Supreme Court come to?”

“You want us to issue guidelines to the politicians regarding their criticism of the judiciary on loaded topics of public importance? What are these topics according to social worker Bijon Kumar Mishra?”, asked the Chief Justice rhetorically.

Even as the Counsel pressed that 9 persons were killed in the protests and that no action was taken against the concerned politicians, the Chief Justice proceeded to dismiss the petition, recording that even assuming that the PIL is bonafide, having regard to its nature and the circumstances leading to it, the court is inclined to take a view that the matter does not deserve attention.