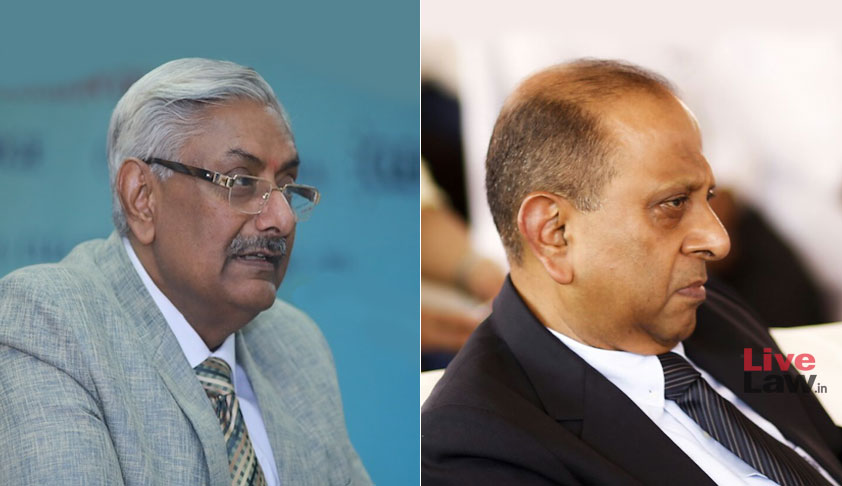 The Supreme Court bench of Justices Arun Mishra and Amitava Roy today heard the counsel for Common Cause, Prashant Bhushan and the Attorney-General, Mukul Rohatgi, at length, before coming to the conclusion that the Sahara-Birla documents indicating an alleged pay-off to the Prime Minister, Narendra Modi, and other named public servants, are not cogent enough to accept the plea for...

The Supreme Court bench of Justices Arun Mishra and Amitava Roy today heard the counsel for Common Cause, Prashant Bhushan and the Attorney-General, Mukul Rohatgi, at length, before coming to the conclusion that the Sahara-Birla documents indicating an alleged pay-off to the Prime Minister, Narendra Modi, and other named public servants, are not cogent enough to accept the plea for a Court-monitored independent investigation into it.

The hearing of item No.2 at Court No.10 began in the morning around 11 in the forenoon, and continued in the afternoon till 3.30 p.m. The bench, then, took about half an hour to dictate the order.

Prashant Bhushan first gave an overview of the main matter, by elaborating why the petitioner has questioned the competence of the Central Vigilance Commissioner, K.V.Chowdary. Prashant Bhushan said that the post of the CVC is a very important post from the point of view of institutional integrity, especially when the Lokpal is not yet functioning. The petition, he said, raises serious grounds of challenge to the appointment of Chowdary and another member of the CVC.

Prashant Bhushan then moved on to explain the significance of the documents recovered by the Income Tax Department during its raids. He said that the raids on the premises of Aditya Birla Group of companies took place in October 2013. The raids, he said, led to recovery of Rs. 25 crores in cash, a large volume of incriminating documents in the form of emails, handwritten diaries, notebooks and other documents seized from computers, which showed large payments of crores of rupees to public servants of Department of Revenue Intelligence, Ministry of Environment and Forests, and the Coal Ministry. He alleged that many of these payments were made at a time when Birla was seeking environment clearances, coal mining leases, etc.

Prasant Bhushan then referred to an email recovered from the laptop of the Aditya-Birla group president, Shubhendu Amitabh, showing payment of Rs.25 crores, which said, “12 paid rest?”. When Amitabh was questioned about this email entry, he said this reflected payment to Gujarat Alkali and Chemicals which he was unable to substantiate.

Prashant Bhushan then said the Income Tax Department carried out a detailed appraisal of these documents , and found that they are genuine. He further disclosed that the DGM Accounts of Birla, who was the custodian of cash, told the IT Department that he used to receive cash in instalment of Rs.50 lakhs/1 crore from various hawala dealers sometimes twice a day. These monies used to be paid to various people at the instance of the group president by four other senior officers of Birla along with him.

The Sahara group, Prashant Bhushan said, was raided by the IT Department in November 2014. Among the documents seized were detailed accounts maintained in spreadsheets in the computers of an employee of Sahara which contain details of 115 crores of cash received in the year 2013-14 out of which 113 crores had been paid out to various public servants. The spreadsheets, he said, contain details of dates, amounts, and source from which amounts were received which is mostly from a marketing company of Sahara called Marcomm. It also contained details of payment of this cash on different dates of different amounts to different people at different places and through named delivery persons.

Before the Income Tax Department, Sahara claimed that these were fictitious records created by a disgruntled employee to implicate another employee of Sahara. This explanation, Prashant Bhushan claimed, was disbelieved by the Income Tax Department, which concluded that the documents represaented the true state of affairs, because the cash received as mentioned in these documents from Marcomm tallied with the entries and ledger books of Marcomm itself, which were also recovered.

Despite all this evidence of payments to public servants, which amount to offences under the Prevention of Corruption Act, the IT Department did not refer this matter for a criminal investigation as mandated by judgments of the Supreme Court.

At this stage, the question whether registration of FIR, before credible evidence comes to the fore, was hotly debated in the Court. The Attorney General, Mukul Rohatgi argued that FIR cannot be filed on mere allegations, whereas Prashant Bhushan and Shanti Bhushan contended that the registration of FIR is mandatory, especially after the Supreme Court’s judgment in Vineer Narain, and Lalita Kumari cases, to set the investigation into motion.

The bench, however, concluded that “voluminous and detailed documents of payoffs” recovered by the authorities through raids are random loose sheets of paper, on the basis of which high public functionaries occupying important offices cannot be subjected to investigation.

The AG, however, cautioned the Court that if this plea is conceded, there would be crores of demands for investigation on the basis of mere allegations. “It is incredible that we can hear crores of such complaints every day”, he told the court.

Prashant Bhushan, however, claimed that he was not at all saying that the documents recovered were conclusive proof of offences committed by the public servants named therein. But he said investigation is necessary to determine whether the documents are credible enough, and one cannot reach a definite conclusion about their credibility without investigation.

In a press release, Prashant Bhushan, has described the outcome of the case, as very unfortunate, and a setback to the whole campaign against corruption and for probity in public life. “It is also a black mark on the reputation of the Supreme Court, which had distinguished itself by directing independent investigation into the coal scam and the 2G scam. It has abdicated its constitutional responsibility for ensuring such investigation”, he said in the statement.