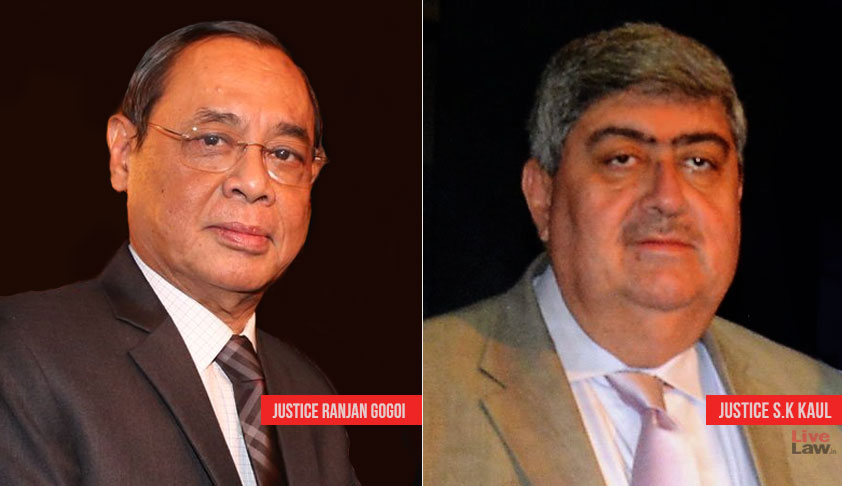 Supreme Court bench of Chief Justice Ranjan Gogoi and Justice Sanjay Kishan Kaul on Monday refused to interfere in a petition filed by Criminal Justice Society of India assailing Section 375 of the Indian Penal Code, 1860 on the ground that the Section is not gender-neutral.The bench observed that though there is merit in the present petition, at this stage the legislature is the...

Supreme Court bench of Chief Justice Ranjan Gogoi and Justice Sanjay Kishan Kaul on Monday refused to interfere in a petition filed by Criminal Justice Society of India assailing Section 375 of the Indian Penal Code, 1860 on the ground that the Section is not gender-neutral.

The bench observed that though there is merit in the present petition, at this stage the legislature is the appropriate authority as the law 172nd Law commission Report had already recommended gender neutrality in rape laws.

The petition moved by Ashima Mandla on behalf of ‘Criminal Justice Society of India’ said Section 375 IPC be declared violative of Articles 14, 15 and 21 of Constitution of India insofar the definition of rape does not account for gender-neutrality.

The petition said, “It is imperative to note that transgenders including but not limited to homosexuals &bisexuals, and men are sequestered from the point of view of victims of rape under the existing Penal Laws of the Country, despite an impending need for the same…as society matures, we must develop empathy for all and this includes male and transgender rape victims. Thus, breaking our silence on the issue of male and transgender rape and questioning social constructs that glorify machismo, reduce men and transgenders to stereotypes and force them to mask their feelings, is what we need.”

The petition said lack of acknowledgment of male and transgender rape has impacted the ability of victims to recognize their own victimization.

It is to be noted that way back in the year 2000, the Law Commission of India had in its 172nd Law Commission Report proposed modifying rape laws and making them gender-neutral.

The Protection of Children from Sexual Offences (POCSO) Act 2012, applies to children under the age of 18 and is gender neutral.

The petition stated how in 2012, the Criminal Law (Amendment) Bill, 2012 was introduced in the Lok Sabha which proposed modifying Section 375 of the Code by providing a gender-neutral definition of rape for both, the victim and perpetrator followed by an ordinance which had gender-neutral Sections like 354A, 354C, 354D but the Act did not retain gender-neutrality with regard to victims of rape.

Questions of Law put forth in the petition:

1. Whether there is a differentiation between gender-identity and sex under the laws of the land?

3. Whether the absence of gender-neutral definition of rape/sexual assault under Section 375 of the Indian Penal Code, 1860 is violative of Articles 14, 15 and 21 of the Constitution of India?

Don’t view rape as mere penile-vaginal, both men and women can be victims, perpetrators of rape

The petition stated that “gender neutrality within rape statutes is the concept that the criminal law should recognize that both men and women can be rape victims as well as perpetrators. Gender neutrality within rape reflects modern understandings of the nature, effects, and dynamics of non consensual penetrative sex acts, and is an evidence-led means of appropriately labeling criminal conduct”.

It relied on various articles published on how often male rapes are ignored in India and the psychological hesitation of men to report such crimes.

“Scholars have criticized traditional rape laws that only prescribe penile-vaginal intercourse, arguing that these laws exclude ‘a great deal of behavior which is remarkably similar to the act legally designated as rape and.. such exclusion appears to rest on no logical or justifiable grounds. The physical and psychological trauma caused by non-consensual penetration of the vagina, anus, and mouth by the penis or other objects. Moreover, in understanding what constitutes rape, international law has evolved from viewing it just as penile-vaginal to penile-orifice and then to penetrative-orifice, all within a non-consensual context,” it said.

Sec 375 IPC ignores role of woman as perpetrator of rape

The petitioner said there is a dearth of statistics on the incidents of male, transgenders including and not limited to homosexual rape/sexual assault victims because of a notion and perceptions pertaining to sexual assault (wider term for rape) of any person, except for a woman.

“As for transgenders, their voices are curbed because of non-acceptance and societal pressure. On the other hand, the concept of masculinity and male vanity prevent male victims from coming forth and reporting such crimes. Importantly, in the absence of legal recourse or remedy under law, there is no provision for any person except a woman to report rape or sexual assault”.

The petition also raised the argument that “…Section 375 applies only to women as victims and men as perpetrators. It does not take into account non-consensual sexual assault inflicted on a woman by a woman, on a man by another man, on transgender by another transgender or a man or woman, on a man by a woman. The sexual orientation and gender-identity of these persons may either be heterosexual, transgender including but not limited to homosexual, bi-sexual”.

The petition highlighted how male rape till now was being covered as sodomy under Section 377 IPC.

It also pointed out the numerous incidents of sexual abuse in Indian prisons as one of the top reasons for inmates committing suicide, as found out by the National Human Rights Commission.

A study by the Centre for Civil Society found that approximately 18% Indian adult men surveyed spoke of being coerced into sex, of which 16% claimed a female perpetrator and 2% claimed that they were forced into sex by another male.
The petition said the word ‘rape’ should be replaced with ‘sexual assault’ to make it gender neutral and widen the scope of offence.

“This Court in Navtej Singh Johar rightfully observed that the phraseology of Section 377 is gender neutral and that of Section 375 is female-oriented. In the absence of equal protection to men and women alike, the provision of Section 375 of the Code is violative of Articles 14, 15 and 21 of the Constitution of India”, it said.

“…the intention behind this petition is to protect the rights of men and women, homosexual or heterosexual, and that of transgenders alike, from being physically violated by another person without their consent…once the element of consent is taken out of the dynamics of any physical relationship, any person, regardless of their gender or sex could be subjected to sexual violation or rape by another person,” it added.