SC To Hear Review Plea Against Quashing Of NJAC In March 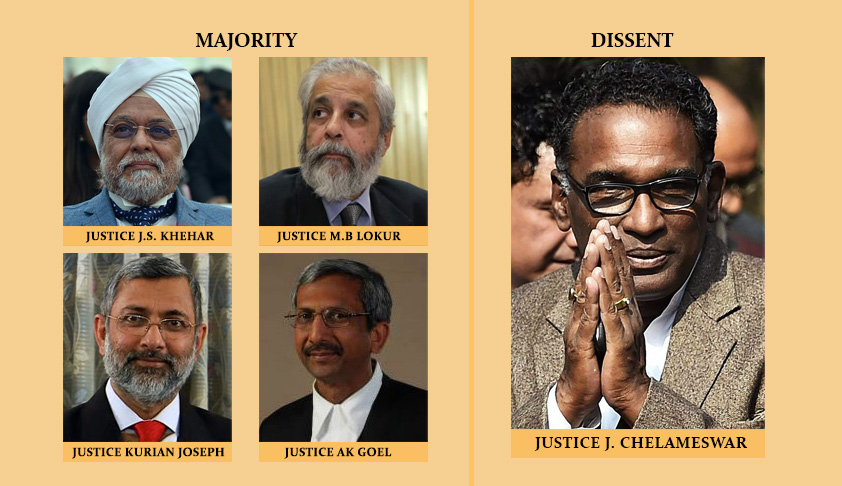 The Supreme Court today said it will hear a petition filed by 'National Lawyers' Campaign for Judicial Transparency and Reforms' seeking review of its October 2015 judgment that quashed NJAC “sometime in March”.“We are seeking complete dismantlement of collegium system of appointment of judges to the Supreme Court and High Courts”, advocate Mathew Nedumpara, representing the...

The Supreme Court today said it will hear a petition filed by 'National Lawyers' Campaign for Judicial Transparency and Reforms' seeking review of its October 2015 judgment that quashed NJAC “sometime in March”.

“We are seeking complete dismantlement of collegium system of appointment of judges to the Supreme Court and High Courts”, advocate Mathew Nedumpara, representing the lawyers’ body mentioned before a bench of Chief Justice Dipak Misra and justices A M Khanwilkar and D Y Chandrachud.

He said that two more petitions seeking a direction to advertise the vacancies of SC and HC judges and videography of Supreme Court’s proceedings also have been filed.

When Nedumpara requested that a date of hearing be specified, the CJI replied: “OK. Sometime in March”

Declaring that the judiciary cannot risk being caught in a “web of indebtedness” towards the government, the Supreme Court had rejected the National Judicial Appointments Commission (NJAC) Act and the 99th Constitutional Amendment which sought to give politicians and civil society a final say in the appointment of judges to the highest courts.

The National Lawyers’ Campaign for Judicial Transparency and Reforms filed the petition seeking review of the judgment dated October 16, 2015, of the Supreme Court in Supreme Court Advocates-on-Record Association v Union of India and Others that struck down the National Judicial Appointments Commission (NJAC) Act of 2014 and upheld the collegium system for appointment and elevation of high court and apex court judges.

The review petitioner, claimed to be “an organisation of the non-elite class of lawyers”, has advanced the following prayers:

(1) A declaration that the judgment dated October 16, 2015, passed by the Constitution Bench of the Supreme Court is unconstitutional and void inasmuch as the challenge on the Constitution (Ninety-ninth Amendment) Act, 2014, and the National Judicial Appointment Commission Act, 2014, was not justiciable;

(2) It involves no violation of anyone’s fundamental rights;

(3) The petitioners in the main petition and the matters connected therewith have no locus standi to institute the same;

(4) The PILs are wholly not maintainable; and

The grounds for review cited by the present petitioner include inter alia:

(2) That in Kesavananda Bharti, the Supreme Court went on to discuss the concept of basic structure of the Constitution beyond what was required. In certain other judgments, namely, Minerva Mills v Union of India [(1980) 2 SCC 591], Madras Bar Association v Union of India [(2014) 10 SCC 1] and the NJAC case too, the fact that the concept of basic structure was evolved with reference to a plea for enforcement of fundamental rights was completely lost sight of and a new jurisdiction founded that a challenge to the constitutionality of a Constitution amendment or an ordinary Act of Parliament will lie under Article 32 of the Constitution, without there in existence a ‘person aggrieved’ and he claiming violation of his fundamental rights by virtue of the Constitution amendment or the Act of Parliament.

(3) The net effect of the judgments in judges-2, judges-3 cases and the NJAC case is the unkindest cut of the concept of separation of power at its very root, with the court assuming the role of both the Parliament and the executive, all at once. The judgments in judges-2 and judges-3 cases and the above petitions have resulted in a ridiculous scenario where Articles 124 and 217 of the Constitution are to be read diametrically opposite to what they state, which has meant cutting the concept of judicial review at its very root.

(4) The fundamental principle of natural justice - no one can be judge in his own cause – stands violated. It is a fundamental principle that where a judge is biased, even where such bias is non-conscious, sub-conscious or unconscious, as in the instant case where former Chief Justice JS Khehar would not have even in the wildest of his dreams ever thought of himself being a member of the collegium writing a judgment so as to secure a place for himself.