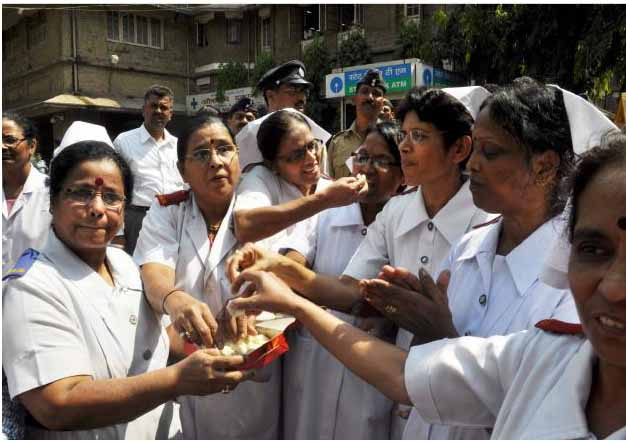 The Supreme Court vacation bench of Justice AM Khanwilkar and Justice Navin Sinha on Monday refused to stay a notification dated April 23 issued by the Government of Kerala revising the minimum rates of wages payable to the employees in the private hospital sector, which superseded the existing rates of minimum wages fixed by notification of the year 2013.The bench was hearing the SLP...

The Supreme Court vacation bench of Justice AM Khanwilkar and Justice Navin Sinha on Monday refused to stay a notification dated April 23 issued by the Government of Kerala revising the minimum rates of wages payable to the employees in the private hospital sector, which superseded the existing rates of minimum wages fixed by notification of the year 2013.

The bench was hearing the SLP preferred by the Kerala Private Hospitals Association against the May 11 order of a division bench of the Kerala High Court concurring with the Single judge of the High Court in declining the stay and relegating the petitioner to make a Representation before the government, observing that it is open to the Government to consider the same, after consultation with all the stakeholders including the nurses and their associations in terms of law to arrive at an amicable settlement, if it is so desired by them.

Senior counsel Abhishek Manu Singhvi, appearing on behalf of the present petitioner, drew the attention of the bench to Procedure for fixing and revising minimum wages as stipulated in section 5 of the Minimum Wages Act of 1948.

Sub-section (1) of the said Section 5 provides that “In fixing minimum  rates of  wages in respect of any scheduled employment for the  first time  under this  Act or  in revising  minimum rates of wages so fixed, the appropriate Government shall either--

(a) Appoint as many committees and sub-committees as it considers necessary to hold enquiries and advise it in respect of such fixation or revision, as the case maybe, or

(b) By notification in the Official Gazette, publish its proposals for the information of persons likely to be affected thereby and specify a date, not less than two months from the date of the notification, on which the proposals will be taken into consideration”.

“The section uses the term ‘either’...the modes under clauses (a) and (b) are alternatives...the government could not have adopted both...a notification was issued in October 2016 and then a 27-member Minimum Wage Committee was constituted...this was followed by a draft proposal and also objections by way of a dissent note...without giving any reasons, the government chose to issue a draft notification under clause (b)...you cannot override compulsory statutory procedure because there was no consensus...since the procedure under (a) had been adopted, (b) could not have been resorted to...the statute raises jurisdictional issues...,” he submitted.

When the bench noted that another writ petition on the subject matter is pending before the single judge of the high court and that an opportunity should be accorded to the judge to hear the same, Singhvi advanced, “I am saying so...please give a direction to decide within two weeks...there is an intention to have the government decide...please let it be heard soon...the (impugned) notification has not come into force so far and can stay in abeyance for two weeks...”

Refusing to grant the relief of stay, the bench on Monday directed the high court to dispose of the matter expeditiously within one month.

“The main ground of attack before the High Court was that the Government had succumbed to the pressure of unions of Nurses and other persons engaged in hospitals. It was vehemently contended that the Government had committed procedural irregularity while issuing notification, purportedly under section 5(1)(a) of the Minimum Wages Act. It was contended that Government did not give reasons for not accepting the objections of the Association”.

The division bench had held, “After hearing the learned counsel for the writ appellant and the learned Government Pleader and the counsel who got impleaded in the writ petition, we feel that, there is no scope for stay at this stage nor existed at the time of passing the impugned order. The learned Single Judge had noted that the matter needs comprehensive hearing of the various issues involved. The notification was challenged by certain nurses and their associations also. No interim order was granted in that also. (The impugned notification) prima facie indicates that, preliminary notification was issued and objections and suggestions were considered. Definitely, the appellants and all stakeholders would be entitled to seek their reliefs before the concerned authorities, which was kept open by the learned Single Judge...”