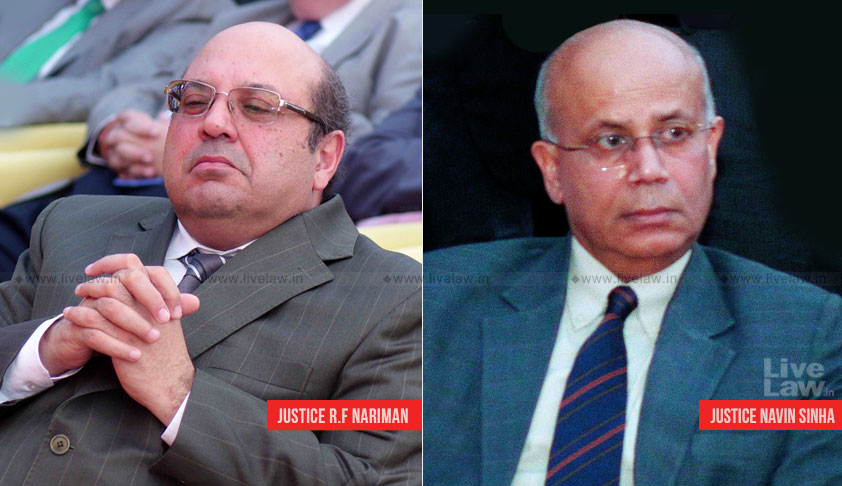 The Supreme Court today repelled the challenge made against the validity of tariff order and interconnection regulations introduced by the Telecom Regulatory Authority of India (TRAI) in 2017.The bench of Justice R F Nariman and Justice Navin Sinha dismissed the appeals filed against Madras High Court's judgment which had refused to entertain the challenge by 2:1 majority.The HC bench of the...

The Supreme Court today repelled the challenge made against the validity of tariff order and interconnection regulations introduced by the Telecom Regulatory Authority of India (TRAI) in 2017.

The bench of Justice R F Nariman and Justice Navin Sinha dismissed the appeals filed against Madras High Court's judgment which had refused to entertain the challenge by 2:1 majority.

The HC bench of the then Chief Justice Indira Banerjee(now SC judge) and Justice Sundar delivered a split verdict, with  Justice Banerjee upholding the regulations and Justice Sundar accepting the challenge. The matter was then referred to a third judge, Justice M M Sundaresh, who concurred with Justice Banerjee to uphold the regulations. The appeals in SC were filed challenging the verdict so passed by Madras HC.

The 2017 Regulations prevented the mixing of pay channels and free to air channels in a single bouquet.  The Regulations restricted placing high definition format and ordinary format of the same channel in the same bouquet.  Another restriction was that a bouquet of pay channels should not contain any pay channel where the Maximum Retail Price is more than Rs.19/-.   There are some other caps which say that discounts of MRP of a bouquet should not exceed 15%.

The case of appellants was that the TRAI Regulations amounted to regulation of contents of the channels. The TRAI, in exercise of powers under Sections 11 and 36 of TRAI Act, can regulate only carriage or means of transmission, but cannot regulate content. The content of their programmes/broadcast is covered and controlled solely by the Copyright Act 1957, which recognised two distinct rights, one being copyright and the other being broadcast reproduction right ('BRR'). The legal basis for this submission of appellants was that programmes aired/beamed in their television channels have content which is either created by appellants themselves or procured from third parties at a huge cost and such content is governed solely by the Copyright Act.

After hearing a battery of Senior Advocates - Dr A M Singhvi and P Chidambaram for broadcasters, Rakesh Dwivedi and Vikas Singh for TRAI , K V Vishwanathan for Multi System Operators, Shyam Divan for direct-to-home operators and Krishnan Venugopal for consumers- the bench dismissed the appeals.

The Court adjudicated the issue in the light of the objective of the TRAI Act, which was to harmonize the interests of service providers and consumers. It was held that no constricted meaning can be given to the provisions of this Act and that the power to regulate has to be construed widely to advance the objectives of the Act.

It was noted that one of the functions of the Authority, though recommendatory, is to "facilitate competition and promote efficiency in the operation of telecommunication services (which includes broadcasting services) so as to facilitate growth in such services". It was also notice from Section 11(1)(b) that terms and conditions of interconnectivity between different service providers have to be fixed, which necessarily included terms that relate not only to carriage simpliciter but also to all terms and conditions of interconnectivity between broadcaster, MSO, Cable TV operator and the ultimate consumer.

The Court traced the rationale of the Regulations as to provide "a level playing field to both broadcaster and subscribe".

The reason for capping the discount was elaborated by the Court as : "For example, when high discounts are offered for bouquets that are offered by the broadcasters, the effect is that subscribers are forced to take bouquets only, as the a-lacarte rates of the pay channels that are found in these bouquets are much higher. This results in perverse pricing of bouquets vis-à-vis individual pay channels. In the process, the public ends up paying for unwanted channels, thereby blocking newer and better TV channels and restricting subscribers’ choice"

It was further observed that "when such discounts are limited, a subscriber can then be free to choose a-la-carte channels of his choice. Thus, the flexibility of formation of a bouquet, i.e., the choice of channels to be included in the bouquet together with the content of such channels, is not touched by the Authority."

Regarding the ceiling of Rs.19 for pay channel it was stated: "INR 19 is an improvement over the erstwhile ceiling of INR 15.12 fixed by the earlier regulation which nobody has challenged. To maintain the balance between the subscribers’ interests and broadcasters’ interests, again the Authority makes it clear that broadcasters have complete freedom to price channels which do not form part of any bouquet and are offered only on an a-lacarte basis"

The Court also extracted in the judgment the Memorandum of TRAI explaining the reasons behind the Regulations as "Abnormal high price of a pay channel may result in higher price of a bouquet leading to adverse impact on subscribers' interests. It is an established fact that bundling of channels complicates and obscures their pricing. Prices are obscured because subscribers do not always understand the relationship between the bundle price and a price for each component. However, the bundling of channels offers convenience to the subscribers as well as services providers in subscription management. Keeping in view these realties and to protect the interests of subscribers, the Authority has prescribed a ceiling of Rs. 19/- on the MRP of pay channels which can be provided as part of a bouquet."

The Court held that the attempt of the Authority was to kill attempts to thwart competition by regulating the tendencies of large broadcasters to force customers to subscribe to bouquet of channels. The  flexibility of formation of bouquet has been given to broadcasters and MSOs both to such an extent that total permissible discount does not kill the a-la-carte choice.

As regards the conflict between the Copyright Act and the TRAI Act, it was held that the Copyright Act had nothing to do with the inter se relationship between the broadcaster and the distributor in the activity of broadcast. It also does not deal with the price of a channel that an end consumer pays to the broadcaster. These provisions, after 2012 amendment, dealt only with the broadcaster's relationship with holders/owners of copyright/performer's rights in the individual programme, which is re-broadcasted or reproduced. Broadcast Reproduction Right is not an all-encompassing right that eclipses all other legislation and circumscribes the power of TRAI. The Broadcast Reproduction Right is only a right of the broadcaster under the Copyright Act to protect its broadcast from exploitation by a third party.

"The picture that, therefore, emerges is that copyright is meant to protect the proprietary interest of the owner, which in the present case is a broadcaster, in the “work”, i.e. the original work, its broadcast and/or its re-broadcast by him. The interest of the end user or consumer is not the focus of the Copyright Act at all. On the other hand, the TRAI Act has to focus on broadcasting services provided by the broadcaster that impact the ultimate consumer. The focus, therefore, of TRAI is that of a regulatory authority, which looks to the interest of both broadcaster and subscriber so as to provide a level playing field for both in which regulations can be laid down which affect the manner and carriage of broadcast to the ultimate consumers. Once the relative scope of both the enactments is understood as above, there can be no difficulty in stating that the two Acts operate in different fields", held the judgment authored by Justice Nariman.

It was further observed : "If in exercise of its regulatory power under the TRAI Act, TRAI were to impinge upon compensation payable for copyright, the best way in which both statutes can be harmonized is to state that, the TRAI Act, being a statute conceived in public interest, which is to serve the interest of both broadcasters and consumers, must prevail, to the extent of any inconsistency, over the Copyright Act which is an Act which protects the property rights of broadcasters"

The Court expressed the view that TRAI wil prevail over Copy Right Act to the extent royalties/compensation payable to the broadcasters under the Copyright Act are regulated in public interest by TRAI under the TRAI Act.