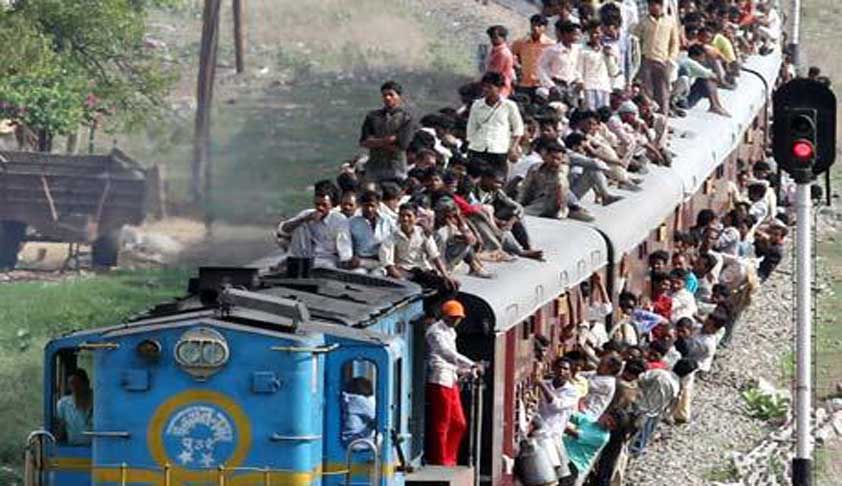 Railways will have to compensate for the death or injury sustained on account of travelling on the roof of a train even if the act of the person was illegal, the Supreme Court has ruled.

A Bench of Chief Justice T S Thakur and Justice U U Lalit made it clear while ordering the Central government to pay a compensation of Rs five lakh each to 19 youths who fatally hit a foot-over bridge while travelling on the roof of an express train five years ago.

The incident pertains to the journey of the Jammu Tawi-Howrah Himgiri Express from Bareilly on February 1, 2011 when lakhs of young men converged for selection into the Indo-Tibetan Border Police.

To control the crowd, the ITBP officials had to resort to lathi charge and the selections were called off. Consequently, the young aspirants boarded the train in question, many on the roof, to make their way back.

Observed the Bench: “In our view, it must be expected of the persons concerned to be aware of the inherent danger in allowing the train to run with such speed having large number of persons travelling on roof top. Though the people who travelled on roof top also contributed to the mishap, the Railway Administration, in our view, was not free from blame. Concluding so, we direct that the next of kin of those who died in the incident and those who sustained injuries must be duly compensated by the Railway Administration. Those who died were obviously very young in age for they had come to compete for the jobs. Taking all these factors in consideration we direct Railway Administration to pay:

(a) Compensation of Rs.5 lakhs to the next of kin in case of every death

(b) Compensation of Rs.1.5 lakhs in every case of permanent disability suffered by anyone in the incident

The court further ordered:”All Central Police Organisations must issue guidelines or Standing Order akin to Standing Orders Nos. 1 of 2011 and 5 of 2013 of ITBP ensuring that only 600 candidates or such number of candidates as could easily be managed or taken care of be called in one cycle on a particular day. For compliance in that behalf, a copy of this Order be sent by the Registry to the Secretary, Ministry of Home Affairs”.