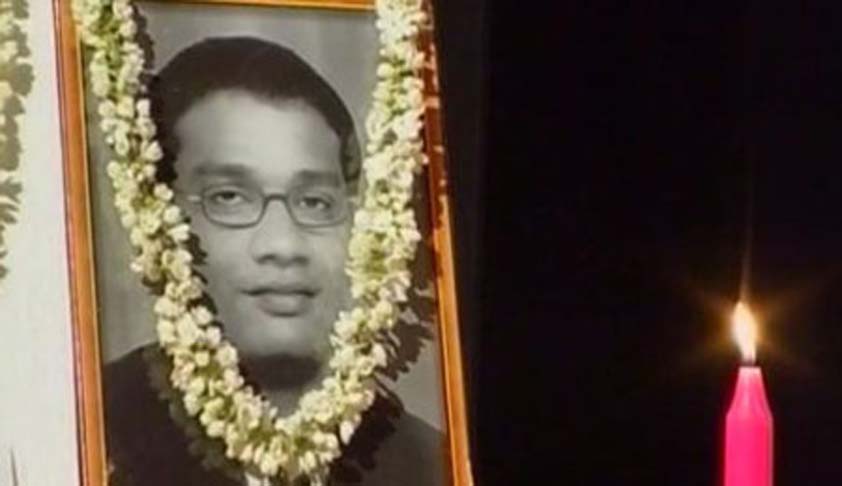 The Supreme Court of India today dismissed the appeals filed by six persons who had been convicted for killing Manjunath, an Indian Oil Employee in 2005. Manjunath had exposed corruption in Lakhimpur area of Uttar Pradesh, causing the services of Petrol Pump of the persons relating to accused persons be disrupted.All the six persons who had appealed to the Apex Court were found guilty by...

The Supreme Court of India today dismissed the appeals filed by six persons who had been convicted for killing Manjunath, an Indian Oil Employee in 2005. Manjunath had exposed corruption in Lakhimpur area of Uttar Pradesh, causing the services of Petrol Pump of the persons relating to accused persons be disrupted.

Thereafter, after due judicial process, the Trial Court awarded death penalty to a convict for the murder of Manjunath while sentencing others to life imprisonment and other smaller punishments.

However, the High Court thereafter changed the sentence of the convict awarded death penalty to life imprisonment, while maintaining the sentences awarded to others. The High Court also gave the benefit of doubt to two co-accused persons and acquitted them.

Before the Supreme Court, the Counsel of the appellants relied on Aghnoo Nagesia v State of Bihar (1966) 1 SCR 134, and submitted, ""a confession made to a police officer under any circumstances is not admissible in evidence against the accused. It covers a confession made when the accused was free and not in police custody, as also a confession made before any investigation has begun" The judgment also notes the contentions of the Counsel as, "Taking  support  from a  decision  of  this  Court  in  State  of  Punjab Vs. Barkat  Ram, (1962)  3  SCR  338,  learned  counsel submitted that the confession made to any member of the police, of whatever rank and at whatever time, is inadmissible in evidence as per Section 25 of the Evidence Act."

The  Counsel  also  submitted  that  the  judgment of the High Court is based only on conjectures and surmises and not on any cogent  and  reliable  evidence. He claimed that the case of the prosecution is based on only circumstantial evidence and that it has failed to connect all the chain of events. The Counsel also tried to expose loopholes in scientific reports and claimed that the place of occurrence of the event is doubtful and that the evidence against the accused persons was planted. He also submitted that the accused persons had no motive to kill Manjunath and that the case against them is a fabricated one.

Additional Advocate General Gaurav Bhatia appeared for the State of UP and submitted that, "this is an unfortunate case where an Officer of the Indian Oil Corporation was brutally murdered by the accused for honestly carrying out his duties." He also submitted that the prosecution had made its case beyond reasonable doubt and that the Supreme Court should entertain the appeal only if it involves a substantial question of law.

On merits, the Bench agreed that the entire case of prosecution is based on circumstantial evidence. It also said, "It is settled principle of law that statements made by an accused before police official which amount to confession is barred under Section 25 of theIndian Evidence Act.  This prohibition is, however, lifted to some extent by Section 27."

The Court, quoting from State of  Maharashtra Vs. Damu, (2000) 6 SCC 269 said, "In  the  light  of  Section  27  of  the  Evidence  Act,  whatever information given by the accused in consequence of which a fact is discovered only would be admissible in the evidence, whether such information amounts to confession or not. The basic idea embedded under Section 27 of the Evidence Act is the doctrine of confirmation by subsequent events. The doctrine is founded on the principle that if  any  fact  is  discovered  in  a search  made on  the strength of  any information obtained from a prisoner, such a discovery is a guarantee that the information supplied by the prisoner is true. The information might be confessional or non-inculpatory in nature, but if it results in discovery of a fact it becomes a reliable information"

It also noted, "The confession given by the accused is not the basis for the courts below to convict the accused, but it is only a source of information to put the criminal law into motion.  Hence, the accused cannot take shelter under Section 25 of the Evidence Act."

Answering the question of motive raised, the Court observed, "We  are  in  full  agreement  with  the  Courts  below  that  the accused conspired to commit the offence of murder of the deceased. The nexus between the accused to do away with the deceased, has been established by the prosecution beyond all reasonable doubt." The Court also observed, "There is also no doubt  in our  mind as regards the place of  incident.  An effort has been made by the learned counsel appearing for the accused to raise doubts over the same on the ground that the number of bullets used in the crime is not proportionate to the number of bullets hitting the deceased."

Answering the question is discrepancies relating to bullets fired and hit, the Court said, "in every case of gun firing, it is not required that each and every bullet should hit the target.  There may be attempts by the deceased or the victim to save himself from the raining bullets, and in which case, the bullets may not hit the target.  Merely because all the bullets fired from the gun did not hit the target and were not recovered from the scene of offence, is no ground to conclude that the incident did not take place."

Finding no material evidence in favour of accused persons, the Apex Court said, "There is no doubt that when two views are possible, the one which favours the accused should be taken and the accused should be acquitted by giving the benefit of doubt.  But in the instant case, the evidence on record is trustworthy and consistent, and there is only one view, which points to the guilt of the accused."

Finding no merit in the appeals filed, the Court said, "in the light  of  above  circumstances  coupled  with  the complete chain of events, this Court has no manner of doubt to hold that the prosecution has succeeded in proving its case against the accused beyond all reasonable doubt."

The appeals were then dismissed, with no change in sentence that was awarded by the High Court.