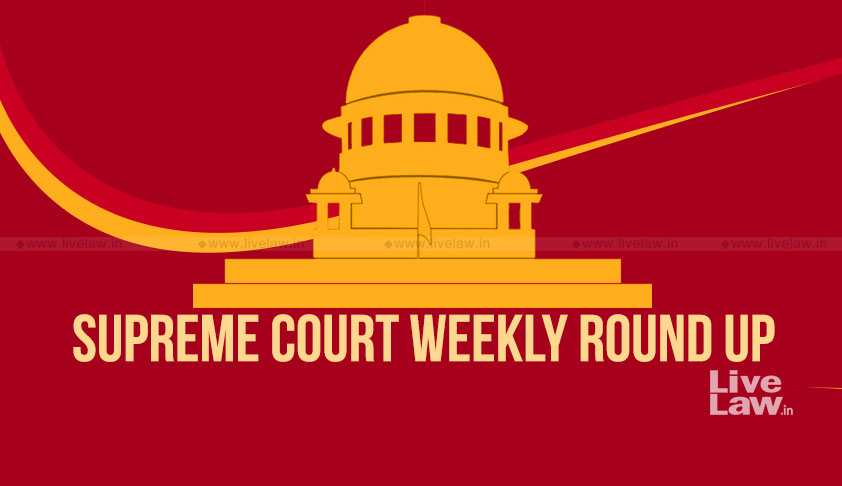 Foreign Law Firms Can’t Set Up Office In India: Foreign Lawyers Can Advice Clients On ‘Fly in And Fly Out’ Basis

Supreme Court of India on Tuesday held that foreign law firms cannot set up offices in India or practice in Indian Courts. But they can give advice to Indian clients on ‘fly in and fly out’ mode in temporary basis. The Bench also directed the Centre and BCI to frame rules.

Arbitration Amendment Act 2015: New Section 36 Apply Even To pending Section 34 Applications On The Date Of Commencement Of The Amendment Act

A Supreme Court bench of Justice R.F. Nariman and Justice Navin Sinha on Thursday pronounced the judgment in Board of Control for Cricket in India v Kochi Cricket Pvt. Ltd and etc.  The question before the bench was whether the substitution made to Section 36 of the Arbitration Act by 2015 Amendment would apply even to appeals under Section 34 filed before the date of amendment, i.e 23.10.2015.

The Supreme Court, in KSEB v Kurien E Kalathil, observed that in the absence of arbitration agreement, the court can refer parties to arbitration only with written consent of parties either by way of a joint memo or joint application and not on oral consent given by their counsel.

The Supreme Court dealt with a whopping land acquisition scam involving 688 acres of prime land in National Capital Region in Haryana in the case Rameshwar and Others v State of Haryana and Others. The case revealed a devious modus operandi employed by private builders to take hold of lands using the medium of Land Acquisition Act.

Settling an important point of law in admiralty jurisdiction, the Supreme Court has held that a maritime claim against the charterer of a ship, who is not the de jure owner of the ship, cannot be enforced through a restraint order against the ship owned by a third party. The Supreme Court bench comprising Justice J Chelameswar and Justice SK Kaul was considering appeals challenging the refusal of Bombay High Court to enforce maritime claims through the arrest of vessel Geowave Commander.

The Supreme Court acquitted a lady accused of murdering her son-in-law by setting aside concurrent findings of the trial court and the high court. Wife and mother-in-law of deceased Brij Bhushan Tiwari were accused of killing him while he paid a visit to their house. During the pendency of the trial, the accused wife died.  The trial court found the mother-in-law guilty and sentenced her to life imprisonment. The conviction was later upheld by the high court.

The five-judges Constitution bench of the Supreme Court on Tuesday extended the deadline for mandatory linkage of Aadhaar number with bank accounts and mobile numbers till the disposal of petitions challenging the Constitutional validity of Aadhaar (Targeted Delivery of Financial and Other Subsidies, Benefits and Services) Act, 2016. But this extension is not applicable to availing services and subsidies under section 7 of Act.

SC Rejects GJM President’s Plea To Transfer All Cases Pending Against Him, Other Members To CBI/NIA

The Supreme Court dismissed plea of the president of the Gorkha Janmukti Morcha (GJM) seeking transfer of investigation of all First Information Reports lodged against the petitioner and other members of the GJM, to the NIA/CBI.

Observing that the rule of measuring damages from the time of breach of contract is flexible, the Supreme Court modified compensation of Rs 3.65 crore awarded by NCDRC to a flat buyer in a redevelopment project to Rs 2.27 crore. A bench of Justice NV Ramana and Justice S Abdul Nazeer modified the order of NCDRC saying the claim granted by “NCDRC seems to surpass the actual-loss based damages and enter the domain of gain-based remedy”.

The Supreme Court bench of Chief Justice Dipak Misra, Justice D. Y. Chandrachud and Justice A. M. Khanwilkar on Monday directed the Registrars General of all High Courts to give intimation to the registry of the apex court of the district wise pendency of the cases under the Protection of Children from Sexual Offences Act of 2012, along with the status.

The Supreme Court on Monday issued notice to the Bar Council of India on a PIL challenging the permission to an individual to perform the dual role of a lawyer and a legislator.

The Supreme Court stayed a Delhi High Court judgment that held that there are no provisions in the Pre-conception and Pre-Natal Diagnostic Techniques (Prohibition of Sex Selection) Act, empowering any of the bodies constituted under the law or even the Central government to prescribe qualifications for practicing medicine with the aid of an ultrasound imaging equipment or to prescribe the nature and content of the curriculum or duration of the qualification.

Paving the way for hundreds of residential and commercial projects in Mumbai which had come to a halt following the Bombay High Court ban on new construction due to poor disposal of construction and demolition waste, the Supreme Court on Thursday permitted construction activity with a rider that builders/ developers would be employing adequate safeguards to prevent dust particles dispersing in the air and would have to transport debris to specific sites identified by the municipal corporation.

A Supreme Court bench of Justice Arun Mishra and Justice Naveen Sinha came down heavily on the CBI and Enforcement Directorate (ED) for not completing investigation in all 2G-related cases, including Aircel-Maxis case arising out of 2G spectrum allocation scam, and directed the agencies to complete the probe in 6 months.

The Supreme Court bench of Chief Justice Dipak Misra, Justice D. Y. Chandrachud and Justice A. M. Khanwilkar on Thursday directed the Additional Chief Metropolitan Magistrate not to proceed with the criminal defamation proceedings against The Wire  filed by Jay Shah, son of BJP President Amit Shah in respect of an article  published in Wire until the next hearing before the apex court on April 12.

SC Extends Protection To Karti Till March 26; Transfers Pending ED Matters In Delhi HC To Itself

In a relief to Karti Chidambaram, the Supreme Court on Thursday extended the protection from arrest granted to him by the Delhi High Court earlier in the day from March 22 by another four days to March 26.