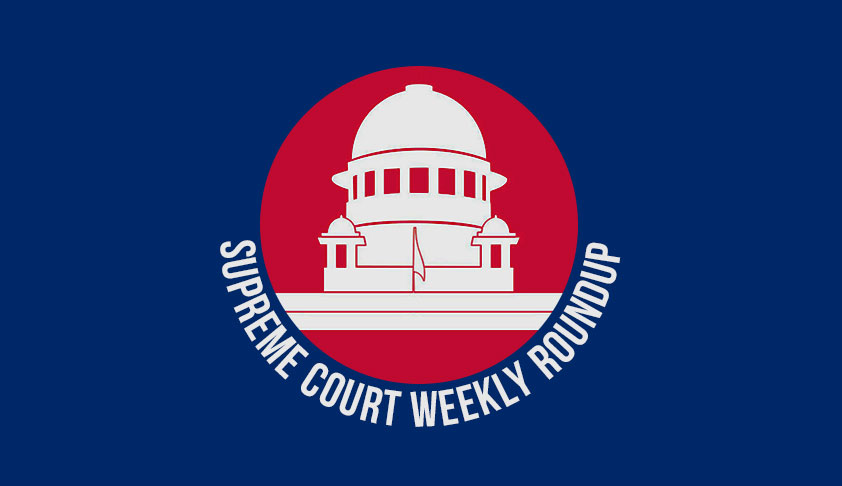 No Court Can Extend Statutory Period To Prefer Election Petition

The Supreme Court, in Reji Thomas vs. State of Kerala, observed that once the mechanism provided under the Statute provides for a time schedule for preferring an election petition, in the absence of a provision in the Statute for enlarging the time under any given circumstances, no court can extend the period in election matters.

Three Acres Of Land & Enrolment Of 300 Students Not Mandatory To Get NOC For CBSE Affiliation: Kerala HC Judgment Upheld

In a setback to the Kerala government, the Supreme Court upheld the Kerala High Court judgment that struck down two norms prescribed by the Government of Kerala for the grant of an NOC to new schools for affiliation to the CBSE and for existing schools for renewal of affiliation viz. requirement of minimum 3 acres of land and minimum enrolment of 300 students.

Population Not The Only Basis For Classification Of Municipalities

Holding that the notifications issued by the State of Rajasthan, that classified municipalities only on the basis of population without taking into account various other parameters, cannot be treated as notifications contemplated under Article 243(Q)(2), the Supreme Court observed that the Governor, while constituting municipal bodies contemplated is not free to notify ‘areas’ in his absolute discretion but is required to fix the parameters necessary to determine whether a particular area is a transitional area or a smaller urban area or a larger urban area.

Setting aside, what it termed as a ‘completely erroneous’ order, the Supreme Court observed that even if an arbitration agreement entered into after Arbitration and Conciliation Act, 1996 had come into force makes a reference to the applicable provisions of those under Indian Arbitration Act or 1940 Act, such stipulation would be of no consequence and the matter must be governed under provisions of 1996 Act.

The Supreme Court on Wednesday reportedly took suo motu cognizance of the murder of an assistant town planning officer during a court-ordered anti-encroachment drive in Himachal Pradesh’s Kasauli.

The Supreme Court on Friday stayed an Allahabad High Court order directing authorities to restore agricultural land which was illegally being used for the creation of religious structures. While hearing a Petition filed by the U.P. Sunni Central Waqf Board, the Bench comprising Justice Kurian Joseph, Justice Mohan M. Shantanagoudar and Justice Navin Sinha also issued a notice to the Respondents and restricted the use of loudspeakers at the disputed premises.

The Supreme Court directed deletion of adverse remarks made against a Resolution Professional (RP) registered with the Insolvency and Bankruptcy Board of India by the National Company Law Appellate Tribunal (NCLAT) questioning his competence without any reasons and despite the Committee of Creditors (CoC) voting in favour of his appointment as the liquidator for the liquidation of the corporate debtor, a Hyderabad-based construction/ infrastructure company.

The Supreme Court stayed execution of death sentence awarded to a man accused of rape and murder of an 8-year-old girl in Uttarakhand. Granting leave for appeal to the accused, the bench headed by the Chief Justice of India Dipak Misra has called for lower court records.

The Supreme Court recently set aside an Allahabad High Court order that refused to allow a girl to stay with her husband, finding that she is a minor as per the CBSE certificate.

Inordinate Delay To Complete Investigation May Be Taken As Presumptive Proof Of Prejudice, Particularly When Accused Is In Custody

The Supreme Court, on Tuesday, observed that inordinate delay in completing investigation may be taken as presumptive proof of prejudice particularly when accused is in custody so that prosecution does not become persecution.

The Supreme Court bench of Chief Justice Dipak Misra, Justice D. Y. Chandrachud and Justice A. M. Khanwilkar on Tuesday issued a string of directions in respect of the trial and disposal of matters under the Protection of Children from Sexual Offences (POCSO) Act of 2012.

Cauvery: SC Reprimands Centre For Asking More Time To Submit Scheme On The Ground That PM And Ministers Busy With Election Campaign

Supreme Court of India on Thursday reprimanded the Centre for not having complied with the Court’s direction dated April 9 to frame the scheme under section 6A of the Interstate river disputes act of 1956 by May 3  pursuant to its February 16 verdict in the Cauvery river water dispute.

Not Interfering With Religious Rituals, But Ensure No Damage Is Caused to Jyotirlingam of Ujjain Mahakaleshwar Temple, Do Not Misreport This Order : SC

While refusing to prescribe or restrain the religious practices and Pujas to be performed in Mahakaleshwar Temple in Ujjain, the Supreme Court observed that it has to be ensured that no damage is caused to the Jyotirlingam.

The Supreme Court accepted apologies tendered on behalf of the states of West Bengal and Uttarakhand for disclosing names of rape victims in the affidavit they filed before the court, observing that they have committed a very serious lapse and they are required to be far more circumspect in future.

The Supreme Court on Friday disallowed Karnataka mining baron Gali Janardhana Reddy to visit Ballari and campaign for his brother Somasekhara Reddy, a BJP candidate in the constituency and also vote in the May 12 election.

The Supreme Court on Friday issued notice on an appeal filed by the Allahabad High Court against its own judgment placing family courts under the superintendence of the High Court. The notice was issued by a Bench comprising Justice Ranjan Gogoi and Justice R. Banumathi on a petition challenging a judgment passed in July last year.

While staying the Madras High Court order by which the CBSE was asked to set up additional examination centres in Tamil Nadu for this year’s National Eligibility-cum-Entrance Test (NEET) for the sake of students allotted centres as far as Rajasthan and Kerala, the Supreme Court directed the Board to ensure minimum inconvenience is caused to students in future.