The Leap From Cancellation Of 2G Licences To Criminality Is What I Have A Problem With, Says Khurshid On Launch Of His Book ‘Spectrum Politics: Unveiling the Defence’ 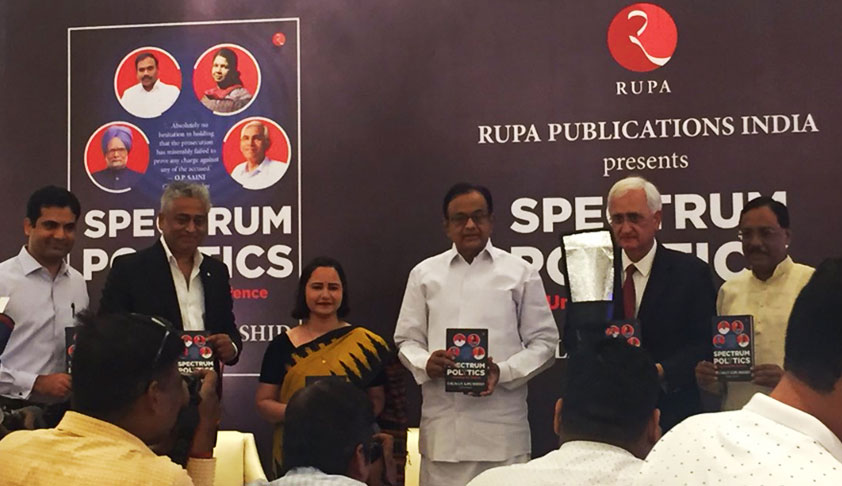 The book, as the name suggests, is an attempt to throw light on what had ensued during the allocation of the 122 2G licenses in 2008, infamous as the ‘2G scam’. The book launch was followed by a discussion, moderated by veteran journalist and Consulting Editor at India Today Group Rajdeep Sardesai, among the panelists, namely Khurshid, former Finance Minister and senior counsel P Chidambaram, JD(U) spokesperson Pavan K Varma and former TRAI Chairman Rahul Khullar.

“Those who read this book might say that it seeks to establish what we suffered as a perception; that there was no criminality; and that the policy decisions made were honest...was that all there was in the 2G scam,” directed Sardesai at Khurshid.

“The legal material, particularly before the trial court, shows that there was nothing wrong...the court relied on an enormous number of notings and files and finally, wrote the judgment (dated December 21, 2017) which spread over 1,500 pages...if in 1,500 pages, one outstanding trial court judge (CBI special judge OP Saini) could not find any fault with us which had anything to do with criminality, then I do not think I am demanding too much...Therefore, some people need to apologise to us...I wish there was someone from the BJP here...”, justified Khurshid.

Turning to Chidambaram, Sardesai asked, “But it is not only the BJP...it is the also the CAG, a constitutional dignitary, whose report was a devastating critique of those policy choices...in fact, the theory so goes that you were the person who had appointed Vinod Rai as the CAG...would you say that he should apologise? Do you believe that the CAG was wrong, particularly, with that almost fantastical figure of Rs. 1.76 lakh crores that was put out?”

Refusing to comment on if Rai was his “preferred choice” or not, Chidambaram stated, “Someday those files would be available under the RTI...he was on the panel of names considered by the Prime Minister...However, it is wrong to say that I had appointed him.”

Insisting that Rai, the then-incumbent CAG, was wrong in conveying that he suspected criminality, Chidambaram elaborated, “On the one hand, there is the Justice Shivraj Patil report (‘which nine out of 10 persons have not even read’, he added), the Joint Parliamentary Committee report (‘which, I am sure, noone has read...people only read what the media picks’, he remarked), and finally, the judgment by judge Saini...on the other hand, there is the CAG report...the facts speak for themselves”.

“Your Ministry was the one which consistently raised red flags as to the manner in which then Telecom Minister A Raja sought to grant telecom licences...but he went about allocating spectrum as he deemed appropriate and the government let him get away with it...,” Sardesai attempted to invoked a reply from Chidambaram.

“In the government, the Finance Ministry has a point of view of its own...the person articulating this view is the Finance Secretary, though obviously with the support of the Finance Minister...the records will show that the Ministry did ask why the mode of auction was not adopted...the Telecom Ministry had said they were continuing with the ‘first come, first serve’ policy laid down in 1999 during the Vajpayee government...again, nine out of 10 people would not be aware that the policy had originated during the Vajpayee government and was followed by successive Telecom Ministers...ultimately the matter was raised before the Prime Minister...after correspondence between the Prime Minister and the Telecom Minister, the latter took the decision which he was competent to take...whether the decision was good or bad [unclear]...,” the politician advanced.

Circling back to Khurshid, the journalist posed, “You have said in your book that ‘the minute we concluded that the problem was not collective but of an individual minister, we had lost the battle of perception’...did you leave Mr. Raja to the wolves because there was a belief within the Congress that he had much to answer?”

“It has something to do with the nature and structure of the government...(‘You mean the coalition government?’, pressed Sardesai. ‘No, no’, asserted Khurshid)...the structure of the government as in how democracy feeds decision making etc...I do not think anyone believed that any money had passed hands...the investigating agencies never pursued any trail of money...whatever money there was pertained to corporate transactions...,” replied Khurshid.

Sardesai proceeded to ask if Khurshid believed that the transfer of Rs. 200 crores effected by Shahid Balwa of DP Realty to a media company owned by DMK party members, followed by the conferment of a telecom licence on “a beneficiary with zero experience” was an honest transaction. “This will take us to another discussion...when you interface, interact and do things as part of your normal business, and then 10-20 years later, questions are raised as to why you shook hands with a particular person or sit with any specific individual, and a case of corruption is built on that, it is absurd,” came Khurshid’s insight.

Declining to comment on the current trends of political vendetta, in as much as the ruling party attempts to link earlier political decisions with criminality, Chidambaram, who is facing a probe in connection with the INX Media case, deliberated on the “larger issue”- “The larger issue is that on account of a paralysis of the decision-making process, there is more litigation today...let me cite as example, without quoting any names, a case that was handled today...a company, having laid down the city gas distribution network, claimed that its deemed authorisation be recognised, or, in the alternative, the authorisation be conferred... the concerned authority failed to take a decision and the matter ended up before the court...in another instance, from a couple of days back, a Ministry has said that it has been waiting for the comments of another ministry since 3 years...I can give you any number of examples...”

The event saw Khurshid articulate his opinion in the light of the judgment dated February 2, 2012 of the Supreme Court in CPIL v. UOI, wherein the 122 licences were quashed by a two-judge bench, followed by the subsequent observation of a five-judge bench on a Presidential Reference, to the effect that the alienation of natural resources by way of public auction is not mandatory- “I have no problem with the cancellation (of the licenses)...the leap from the cancellation to criminality is what I have a problem with, particularly when the five judges said that auction is not the necessarily the only acceptable mode...although the five judges refused to interfere with the stand of the two judges, the two judges could have absorbed and reflected on the view expressed by the five judges...”