‘This Is An Instance Where There Is No Proof That Moulavi Had Died’: Kerala HC Acquits Accused In Chekannur Maulavi ‘Murder’ Case [Read Judgment] 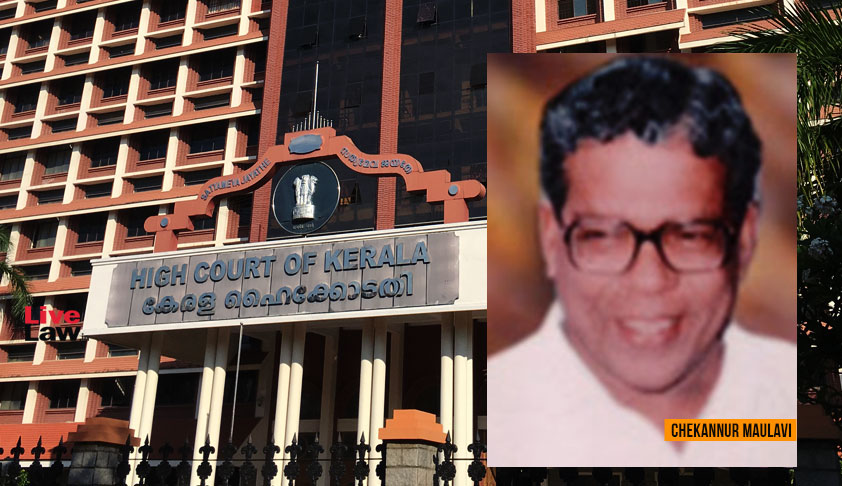 “May be he is murdered, but what is the material adduced by the prosecution to prove the said fact is the question.”

The Kerala High Court on Monday acquitted the accused who was convicted by the trial court in Chekannur Maulavi ‘murder’ case.

Chekannur P. K. Mohammed Abul Hassan Maulavi, a progressive Islamic scholar, went missing since 29th July 1993. One year later, an FIR was lodged before Ponnani police station and it was stated that a few persons from Kozhikode had come to his house by about 8.30 pm on 29th July 1993 and he had gone with him and thereafter there was no information.  Local police started investigation which was later taken up by CBCID and was finally transferred to the CBI.

Though the body was never found, the CBI arrested 9 accused in the case in the year 2006. According to the CBI, Moulavi had been murdered pursuant to a conspiracy and that first accused, VV Hamza, had abducted him and after killing him in the night on 29th July 1993, his body was disposed of in some mysterious manner so that it will never be recovered.

After the trial, the court acquitted 8 accused and convicted the first accused and sentenced him to undergo imprisonment for life in two counts—murder and abduction. The sole convict appealed before the high court which was heard along with appeal filed by the state and the revision filed by the defacto complainant.

The bench comprising Justice AM Shaffique and Justice P. Somarajan, in its judgment, reproduced the deposition made by most of the witnesses in the case. It noted that this was a case where there is no proof that Moulavi had died and the trial court had based the conviction of the accused on ‘last seen theory’.

It said: “The only evidence to implicate A1 is that he had been to Moulavi's house on 29/7/1993, and they were last seen together. It is not for the defence to give any explanation as to what happened to Moulavi after being taken from his house. If there was evidence to prove Moulavi's death immediately after him being taken in the jeep, an explanation from the accused would have been necessary. But there is no such evidence. It is for the prosecution to prove with either ocular or circumstantial evidence that Moulavi had died and there are circumstances to implicate the accused to the crime. Unfortunately no such material is forthcoming in the case.”

The court also observed that to arrive at a conclusion that the accused was involved in a conspiracy to abduct and commit murder of Moulavi and thereafter destroy the evidence, there ought to be sufficient circumstances which are proved beyond reasonable doubt to arrive at such a conclusion. “Though an attempt had been made to prove motive against the accused, prosecution had miserably failed to prove the same. That Moulavi had an ideological difference with a major group of Muslim community by itself cannot be a reason to arrive at a conclusion that the accused had an intention to commit murder and he had conspired with others. There is no evidence that any of the accused was involved in any such conspiracy,” it added.

May be he is murdered, but what is the material…

Acquitting the accused and dismissing appeal against acquittal of the rest, the bench said: “The case of the prosecution is that A1 and A4 had together gone to Moulavi's house in a jeep. The charge is that he was strangulated to death on 29th July 1993 at about 9.30 p.m by A3, A5, A6 and A7. None of the witnesses have spoken in that fashion and there is no circumstance to point out that any of those accused had strangulated Moulavi. It was only an inference drawn without any material on record. Court below had presumed that Moulavi was murdered since he was not seen after 29/7/1993. It was observed that, had he not been murdered, he would have come to Kalikavu at the appointed time. May be he is murdered, but what is the material adduced by the prosecution to prove the said fact is the question.”