“Till You Believe In The Wrong Story, You Can’t Have The Right Law”: Javed Akhtar At the IDIA Annual Conference 2018 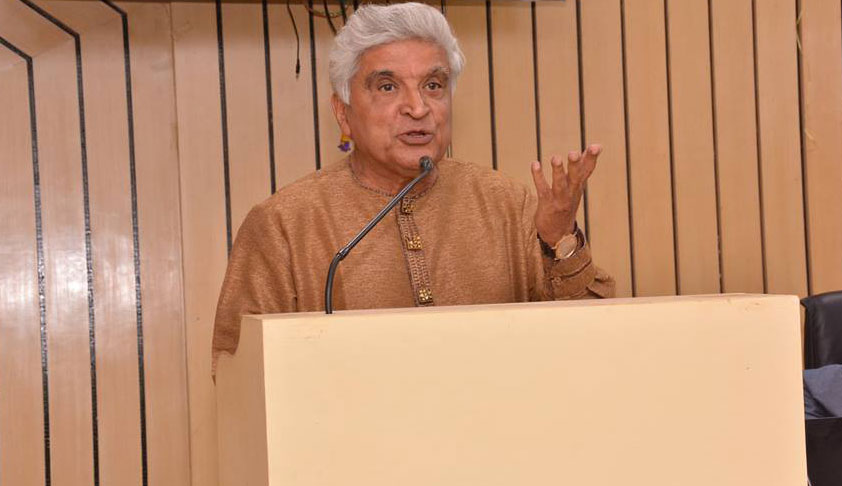 “Till you believe in the wrong story, You can’t have the right law,” lyricist and scriptwriter Javed Akhtar said at the recently-organized IDIA Law Annual Conference, 2018 in New Delhi.Speaking on the conference’s theme of ‘Law and Storytelling’, Mr. Akhtar said that laws around the world will be correct, only when they speak about the human story, which at present is going...

“Till you believe in the wrong story, You can’t have the right law,” lyricist and scriptwriter Javed Akhtar said at the recently-organized IDIA Law Annual Conference, 2018 in New Delhi.

Speaking on the conference’s theme of ‘Law and Storytelling’, Mr. Akhtar said that laws around the world will be correct, only when they speak about the human story, which at present is going on and not complete. He added that such laws will be correct when they appeal to not only your rationale but to your heart, and where you will not put your faith, but your belief.

This came in the context of his explanation and analysis of the difference between ‘faith’ and ‘belief’, where he said that a belief is backed by logic, reason, evidence, rationale and witness(es), whereas faith (which he opined is not a dignified word) is something that doesn’t need any of these characteristics, and simply receives validation owing to the number of people who support it. Mr. Akhtar spoke about the ways in which law and storytelling intersect in the society and history. For instance, speaking of the Constitution of India, he recollected two stories connected with it—one related to Mr. Jawaharlal Nehru and another to Mr. B.R. Ambedkar, which stories he believes shaped our Constitutional Law.

“Nehru tells you a story in Discovery of India, that once upon a time, things were much better. People of different faith, different cultures, sub-cultures, different languages were living together happily. They knew how to adjust with each other and how to achieve harmony. But then came the colonists and things went wrong. Now we have to achieve much more than we have lost…”

He went on to discuss how Nehru, having studied abroad and received exposure to what was happening in Europe, different parts of the world including (the erstwhile) USSR, wanted to imbibe all that was good there, while keeping all that was good in our country as well.

“…And then there was another story. For thousands of years, there were many humans (who) were treated as untouchables and were exploited. They suffered cruelty, humiliation and injustice. But thanks to this change (not that the colonists intended it), unintentionally, they brought something to us—the hope that we would be in a position to get something that we have deserved for thousands of years. A society without bias, without prejudices, where everybody, irrespective of caste, creed, religion, gender will be an equal.”' He explained that even though these are two different stories, “thankfully” they are looking at the same end. Our Constitutional law, he said, is based on these two stories and dreams.

“Partnership” of stories and law

Mr. Akhtar asserted that the most interesting and “diabolic” partnership of stories and law is seen in religion, and called religion the best example of how law can use stories and stories can use law to justify themselves.

For starters, he pointed out how “uninteresting and dull” religion would be, if we remove all the stories and mythologies out of it. He then exposed the methods used by religion to reinforce its (usually) unfair laws, by weaving stories around enticing protagonists.

“They tell you an extremely interesting and seductive story, they create a protagonist who is super, super human, perfect! And you start admiring the person because he says wonderful things and is always right. He is wisdom and humanity personified. And you keep on giving your belief, your faith, you surrender to this character of this story. Once you’ve surrendered is when they cash their chips. Slowly, those things enter which are not fair. Perhaps, if an ordinary person would’ve told you to do this, you would’ve revolted! But now it is coming from somebody who you have accepted, you have put your faith there.”

This is how, he said, religion uses stories.

To end his speech, Mr. Akhtar recounted a story that he wrote with Mr. Salim Khan in 1972, which he said nobody was willing to buy. This story, he said, was not in tandem with the film-making culture of that time, as this story did not have any songs or romantic scenes. Ultimately, he said, the film was bought for Rs. 50,000 and was made into a movie with an actor that nobody wanted to work with anymore at the time. The movie, however, went on to become a huge hit. The film he was speaking about was Zanjeer and the actor was Amitabh Bachchan.

When years later, the movie was made in Telugu, Mr. Akhtar went to the court and received Rs. 4 crores as compensation.

Staying true to his craft of storytelling, he then revealed that the judge who granted this compensation was Justice DY Chandrachud, who had also been invited to the event.

“This is the happy ending to this story,” he said to a chuckling crowd.

Want rapt attention in a court room? Mr. Akhtar has advice for you

During the question and answer session, a Supreme Court lawyer asked Mr. Akhtar if there’s any secret to story-telling that could be used by lawyers in a courtroom.

He then opined that there are two extremely important traits that are needed to achieve this: humility and confidence. He encouraged those present to practice the fine balance between the two qualities.