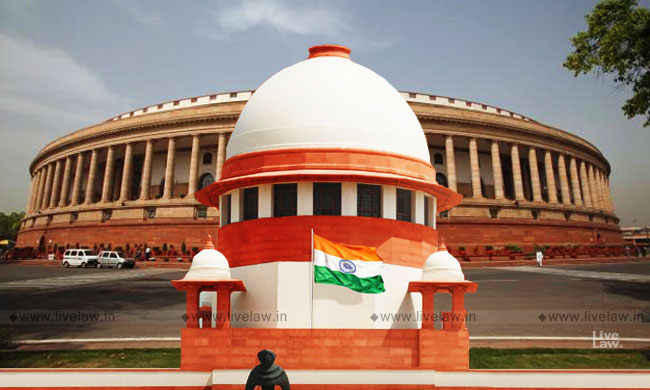 An interesting aspect of the Supreme Court judgment in Maratha Quota case is its interpretation of 102nd Constitutional Amendment.The petitioners challenged the Amendment on the ground that it violated the federal structure by denuding the power of states to identify Socially and Economically Backward Classes. The Centre, through Attorney General, defended the Amendment contending that...

An interesting aspect of the Supreme Court judgment in Maratha Quota case is its interpretation of 102nd Constitutional Amendment.

AG KK Venugopal submitted that the amendment dealt with 'central lists' and did not affect the power of States.

The report of the Select Committee included a clarification by the Ministry that the proposed amendment does not interfere with the powers of the State Governments to identify the Socially and Educationally Backward Classes. The existing powers of the State Backward Classes Commission would continue to be there even after the passage of the Constitution (One Hundred and Twenty-third Amendment) Bill, 2017, the report quoted the Minister.   The Committee further observed that the amendments do not in any way affect the independence and functioning of State Backward Classes Commissions' and they will continue to exercise unhindered their powers of inclusion/exclusion of other backward classes with relation to State List."

Before the Parliament, responding to the apprehensions expressed by some members, the Minister Thawarchand Gehlot stated that 'right to include or remove in the States List concerned with OBCS will remain as it is and it will not be violated in any manner.' "Keeping in view the sentiments of Article 15 and 16, States have also exercised their powers pertaining to making schemes in the interest of OBC category and making provisions in this behalf and such power will remain as it is. We are not making any amendment in Article 15 and Article 16. It simply means that State Commissions will not be affected in any way by this Constitutional amendment. Maximum number of Hon'ble Members have shared their views expressing their fear on this point. I, sincerely want to make it clear that State Governments have right and will remain as it is in future as well. No attempt will be made to tamper with them", the Minister had stated. He had also added that 'the task of making the list of States is done by taking decision by the States Commission.

Justice Ashok Bhushan, in his judgment, took note of the above and observed that Parliamentary Committee reports including speech given by the Minister in the Parliament are relevant materials to ascertain the intention of Parliament while construing constitutional provisions.

"It is, thus, clear as sun light that Parliamentary intention discernible from Select Committee report and statement of Minister of Social Justice and Empowerment is that the intention of the Parliament for bringing Constitutional amendment was not to take away the power of the State to identify backward class in the State.. When the Parliamentary intention is discernable and admissible as aid to statutory interpretation, we see no reason not to interpret Article 342A in manner as per the intention of the Parliament noticed above.", he said in concluding part of the judgment (Justice S. Abdul Nazeer concurred)

Justice Ravindra Bhat, (with whom Justices L. Nageswara Rao and Hemant Gupta agreed with on this issue) approached this issue quite differently.

According to him, the duty of the court always is to first interpret the text, and only if there is ambiguity in the meaning, to resort first to internal aids, before seeking external aids outside the text.

"The polyvocality of parliamentary proceedings where the views expressed by Ministers or Parliamentarians may not be common or unanimous and the danger of attributing a particular intention to the terms of a statute, through the words of a Minister or other functionary which may be at odds with the plain words, cannot be lost sight of.", he observed.

About the Select Committee report, Justice Bhat noted that none of the amendments proposed, expressly preserving the state power, were accepted by the Committee.

"These materials show that there was on the one hand, an assumption that the changes ushered by the amendments would not disturb any part of states' powers; however, a sizeable number- 8 members, after a careful reading of the terms of the amendment, dissented, saying that state power would be adversely impacted. In these circumstances, the debate which ensued at the time of passing of the Bill into the 102nd Amendment was by way of an assurance by the Minister concerned that the existing power of the states would not be affected. To the same effect, are debates on the floor of the Houses of Parliament. Given all these circumstances, it is difficult to accept the contention that the Select Committee's Report, to the extent it holds out an assurance, should be used as a determinative external aid for interpretation of the actual terms of the 102nd Amendment. Likewise, debates and statements cannot be conclusive about the terms of the changes brought about by an amendment to the Constitution.", the judge said referring to debates in Parliament.

Thus, by interpreting Articles 366(26C), 342A(1) and 342A(2), Justice Bhat observed that the power of publishing the list of SEBCs, in relation to every State and Union Territory for the purposes of the Constitution is with the President only. The judgment concludes the debate with following observations:

"166. Such notification is later called as the Central List by Article 342A(2); it can only be amended by the Parliament. The contrary interpretation virtually reads into the provisions of the Constitution amendments which were proposed and expressly rejected in the proceedings of the Select Committee; it also has the effect of reading in what certain dissenting members had proposed. Furthermore, by the interpretive process of taking into account the deliberations before the Select Committee, and speeches on the floor of the Parliament this Court would be reading into the Constitution provisions which no longer exist i.e., that the State can continue to carry out identification of SEBCs. This exercise would be contrary to the express terms..

167. Therefore, the above expressions, having regard to the precedents of this Court with respect to (i) interpretation of the definition clause under Article 366; (ii) interpretation of new definitions inserted in Article 366 and (iii) interpretation of amendments made to the Constitution which inserted new provisions, where the Court always leant in favour of giving fullest effect to the substantive provisions, this court has to adopt the same approach, to usher change, by plain, literal construction. This court never whittled down the terminology through extrinsic aids such as speeches made on the floor of the Parliament or Select Committee reports. In this instance, doing so would be giving effect to what Parliamentarians said or Ministers said, ignoring thereby, the plain terms of the Constitution. As stated earlier, the Court cannot assume that Parliament merely indicated a cosmetic change by conferment of constitutional changes which could have been best achieved by introducing Article 338B."

Also From The Judgment

'To Change 50% Reservation Limit Is To Have A Society Which Is Not Founded On Equality But Based On Caste Rule': SC Refuses To Revisit Indra Sawhney Judgment

Reservation In Public Services Not The Only Method For Improving Welfare Of Backward Classes; State Should Bring Other Measures : Supreme Court

Alteration Of Content Of State Legislative Power In An Oblique & Peripheral Manner Would Not Constitute A Violation Of Basic Structure: Supreme Court