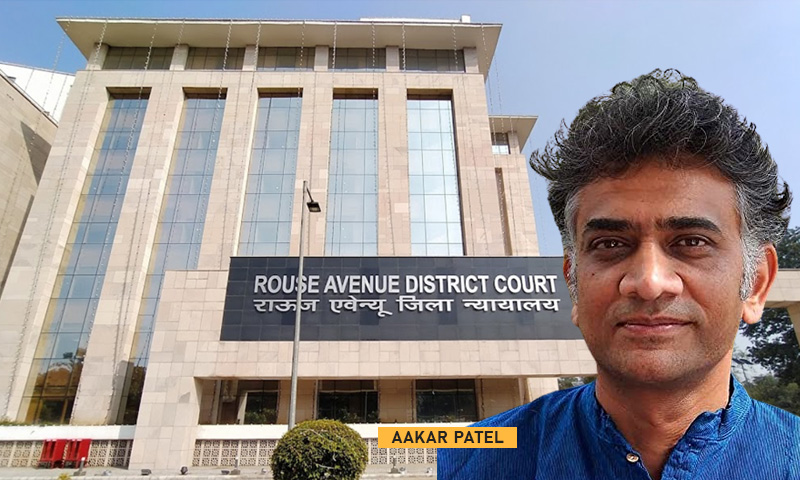 Delhi's Rouse Avenue Court on Friday granted interim relief to the Central Bureau of Investigation (CBI) which had sought revision of the order directing them to immediately withdraw the Look Out Circular issued by it against former Amnesty International India Chief Aakar Patel. Special CBI Judge Santosh Snehi Mann directed Patel not to leave the country without permission of...

Delhi's Rouse Avenue Court on Friday granted interim relief to the Central Bureau of Investigation (CBI) which had sought revision of the order directing them to immediately withdraw the Look Out Circular issued by it against former Amnesty International India Chief Aakar Patel.

Special CBI Judge Santosh Snehi Mann directed Patel not to leave the country without permission of the Court.

Advocate Nikhil Goel appearing for the agency had submitted that no time was given to them to challenge the order.

"There has to be a reasonable time to a party, who feels that the order isn't favourable to approach the authority. The remedy is there," the Judge opined during the hearing.

Through the impugned order, Additional Chief Metropolitan Magistrate Pawan Kumar had also ordered the Director of CBI to tender a written apology to Patel.

That direction has been stayed in revision.

"Stay operation of impugned order vis a vis direction to CBI director for compliance wrt observations made in the later part of the order specially wrt written apology," the Court ordered today.

The matter will now be taken up on April 12 for reply and arguments.

At the outset, Goel argued that one the right to issue LOC was incorrectly interpreted and two, the court had made certain remarks regarding functioning of the agency which should be quashed.

He argued that the judge seems to suggest that if the accused isn't arrested during investigation, LOC cannot be issued. However, it is CBI's case that "subjective assessment" of the IO, which led to opening of the LOC, cannot be determined or interfered with.

"To say that because I haven't arrested somebody and that no LOC can be issued is against the basic purpose of issuing an LOC. We are dealing with a situation where there is a gap between end of investigation and beginning of proceedings before the court."

Commenting on Patel's conduct, Goel added that yesterday was his second attempt to leave the country, without giving the agency an opportunity to approach the Court. However, Advocate Tanveer Ahmed Mir, appearing for Patel, responded that the IO was informed in the Court that Patel would leave by midnight and the impugned order clearly said that it is least expected from the CBI to inform the immigration authorities immediately.

On the remarks made by the Court on CBI's conduct, Goel said,

"We have been fair in investigation. We have filed chargesheet. There was no material to say that someone was biased without which the finding shouldn't have come...to say that we did it deliberately, because in CrPC there are provisions. Court has not even applied mind, proceedings before court have not begun, that stage has not come."

Further, on the aspect of aggregate Rs. 10 lakh monetary loss, CBI submitted that Aakar's travel is being sponsored by the Universities that have invited him.

Goel also cast doubt on the maintainability of the contempt petition moved by Patel. "I don't know under what provision it was filed," he said. The same is listed for hearing at 4 pm.

The CBI stopped him from leaving the country on the basis of a Look Out Notice issued in connection with a case registered by the agency against Amnesty International India for alleged FCRA violations.

In its 10-page order, the local Court had yesterday said that there cannot be any unfettered control/restriction on the right to travel and it is the part of fundamental rights and enshrined under Article b 19 and 21 of the Constitution. It found that the issuance of LOC was a "deliberate act" of the investigating agency to put restriction on the valuable rights of the accused.

The Court had also noted that Patel suffered monetary loss of around Rs.3.8 lac to Patel as he has missed his flight because of the LOC. He was granted liberty to approach the Court or other forum for the compensation. Now, Patel claims to have suffered a further loss of Rs. 5.6 lakh and has moved a contempt petition, which is scheduled to be heard at 4 pm.