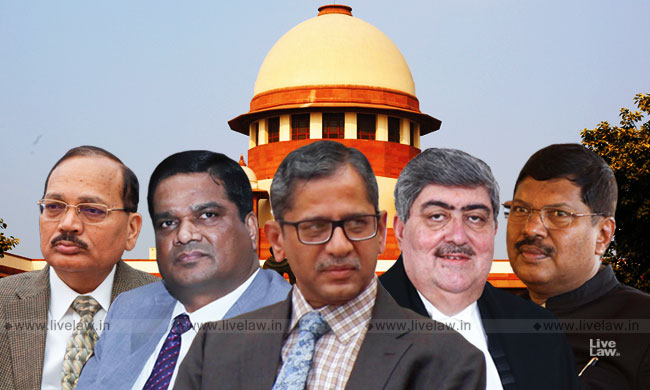 The Constitution Bench of the Supreme Court of India comprising Justices N.V. Ramana, Sanjay Kishan Kaul, R. Subhash Reddy, B.R. Gavai and Surya Kant, on Tuesday started hearing the petitions challenging the abrogation of special status of J&K under Article 370 of the Constitution of India and the Jammu and Kashmir Reorganisation Act, 2019.Senior Advocate Dinesh Dwivedi, appearing on...

The Constitution Bench of the Supreme Court of India comprising Justices N.V. Ramana, Sanjay Kishan Kaul, R. Subhash Reddy, B.R. Gavai and Surya Kant, on Tuesday started hearing the petitions challenging the abrogation of special status of J&K under Article 370 of the Constitution of India and the Jammu and Kashmir Reorganisation Act, 2019.

Senior Advocate Dinesh Dwivedi, appearing on behalf of journalist Prem Shankar Jha, requested for reference of the matter to a 7-judge Bench on the ground that contrasting opinions had been delivered by coordinate Benches of the Supreme Court in the cases of Prem Nath Kaul v. The State of Jammu and Kashmir [1959 AIR 749] and Sampat Prakash v. State of Jammu and Kashmir [1970 AIR 1118].

"Article 370 was the only tunnel of light through which the Centre-State relationship could be governed", he submitted.

"The State becomes a part of the Union only with the help of Article 370. The State was kept apart and could only be governed with: 1. The Instrument of Accession, and 2. Direct consultation with the State."

With regard to the amendment to the Constitution of Jammu and Kashmir, Mr. Dwivedi stated that the "concurrence" of the State was required when it came to implementing policies on subjects that had not been enumerated in the Instrument of Accession (IOA). However, if the policies were in accordance with the terms of the IOA, then mere "consultation" was deemed enough.

Taking the Bench through the clauses under Article 370, Mr. Dwivedi stated that:

DD - The purpose is to state that the provision will cease to operate only with the concurrence of constituent assembly(of J&K).#Article370

Mr. Dwivedi also read out the statements of the Constituent Assembly debates wherein  N. Gopalaswami Ayyangar, in response to Maulana Hasrat Mohani's question regarding why discrimination was taking place, stated that:

"The discrimination is due to the special conditions of Kashmir. That particular State is not yet ripe for this kind of integration. It is the hope of everybody here that in due course even Jammu and Kashmir will become ripe for the same sort of integration as has taken place in the case of other States. At present, it is not possible to achieve that integration. There are various reasons why this is not possible now."

It was also submitted that the legislative power over the State was provided in the IOA: defence, communication and external affairs. "Ancillary entries" were brought in by way of the Government of India Act. The Presidential Order of 1950 came into force om 26.01.1950 and it specified the subjects present in the Indian Constitution which corresponded to the IOA. This allowed for "consultation" on these matters by the President with the representatives of the State. This 1950 Order was superseded by the Presidential Order of 1952.

Dwivedi : When the Constituent Assembly itself is not there, how can the power (to abrogate special statues) be exercised ?#Article370

On being asked by Justice Kaul on how Mr. Dwivedi could submit that Article 370 had "suddenly obliterated, disappeared", Mr. Dwivedi responded:

"The logic is that since Article 370 has not been abolished, it continues. This is something which will have to been in the context of the will of the framers. Once the Constituent Assembly ceases, these clauses do become otiose. And, Article 370 ceases to operate once the lists are specified. It has no functionality. It is incapable of exercise. When the happens, the will of the framers is followed. Maybe this is technical flaw, but the Article serves no purpose. What is the utility of Article 370 anymore?"

Mr. Dwivedi also submitted that the Legislative Assembly could not be the successor the Constituent Assembly. This was touted as his alternative argument if the previous submissions did not seem acceptable to the Bench.

The judgement of Prem Nath Kaul was subsequently read out by Mr. Dwivedi. The key findings iterated by him are as follows:

"Cl. 3 authorises the President to declare by public notification that this Article shall cease to be operative or shall be operative only with specified exceptions or modifications; but this power can be exercised by the President only if the Constituent Assembly of the State makes recommendation in that behalf. Thus, the proviso to Cl. 3 also emphasizes the importance which was attached to the final decision of the Constituent Assembly of Kashmir in regard to the relevant matters covered by Art. 370."

3. On the intention of the framers of the Constitution, according to the Supreme Court, the judgement states:

"The Constitution makers were obviously anxious that the said relationship should be finally determined by the Constituent Assembly of the State itself; that is the main basis for, and purport of, the temporary provisions made by the present Article; and so the effect of its provisions must be confined to its subject matter."

Mr. Dwivedi then moved on to cite the judgement of Maqbool Damnoo v. Sate of Jammu and Kashmir [1972 1 SCC 536]. In this case, the word "Sadar-i-Riyasat" was removed and replaced by the word "Governor". It was submitted that "the Government of India and the President realized that the concurrence of the Constituent Assembly was required to make any changes. Therefore, Article 368 was modified to the extent of its applicability to Jammu and Kashmir."

On the independent nature of the Constitution of J&K, Mr. Dwivedi stated that it was a living document. Constitutions are not made for a day and the same can be seen from Proclamations and the debates.

"Let us take our Constitution. Do we believe that it was there for a year or a limited period? It is believed to be unlimited. It is not carved in stone, because there is always an amending power. Article 368 is shaped by the philosophy that the Constitution will be moulded according to the changing times."

On the parallel nature of the amending power of both the Constitutions, Mr. Dwivedi stated:

Mr. Dwivedi also touched upon the issue of federal bias which afflicts the country.

"The Constitution of India may be having a federal bias and this depends on the States. But, here is a situation where they were keeping everything flexible. Including the federal aspect. To believe that the federal concept is uniform is incorrect. There is no provision is that states that this is uniform. Same applies to Nagaland."

He then moved on to the judgement of Sampat Prakash v. Jammu and Kashmir, which stated that Article 370 was not a temporary provision. Mr. Dwivedi grievance with judgement lies in the fact that it does not allude to any Constituent Assembly debates and there is no discussion regarding the 1959 Prem Nath Kaul judgement.

"Background does not lead to anything; it depends on what the framers said before that. How can this self-serving exercise of powers under Article 368 be used to prolong Article 370? Can Article 370 say that we are lifelong and we will continue to exist? If this question can be answered in affirmative, then the whole debate to regulate the State-Centre relationship is meaningless because that means that the Centre can keep intervening."

Mr. Dwivedi concluded his submissions by stating that the Constitutions of Jammu and Kashmir, and India, were parallel and independent of each other. Additionally, an executive exercise of power could not supersede constitutional power.

Senior Advocate Sanjay Parikh will commence his submissions on the reference of the matter to a larger Bench tomorrow.