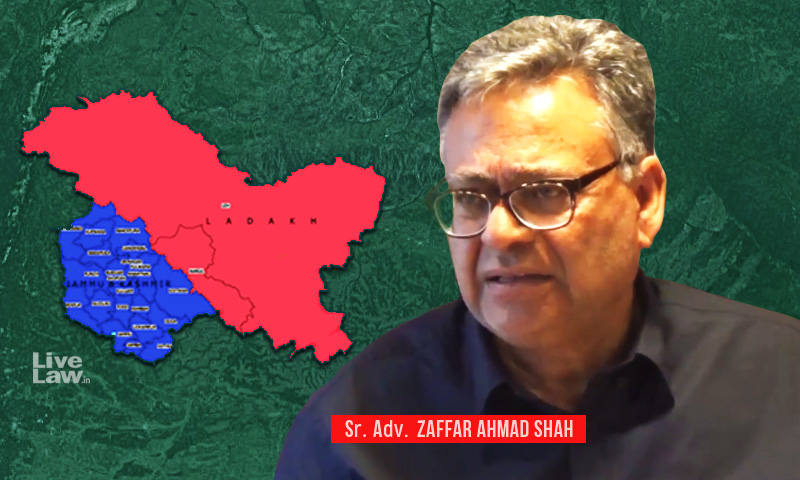 Senior Advocate Zaffar Ahmed Shah, appearing for the Srinagar Bar Council, commenced his submissions in the after-noon session before the 5-judge bench considering the validity of abrogation of special status of Jammu and Kashmir. He submitted that the story of the State could not be equated to others and the history of the State had to be borne in mind before any decision could be...

Senior Advocate Zaffar Ahmed Shah, appearing for the Srinagar Bar Council, commenced his submissions in the after-noon session before the 5-judge bench considering the validity of abrogation of special status of Jammu and Kashmir.

While referring to the Instrument of Accession, Mr. Shah stated the IOA gives power to the Union to legislate on specifically three matters, i.e. defence, communication and external affairs. Clause 8 of the IOA allows the Rules to retain the "powers, authority and rights" except on those matters enumerated in the Schedule.

"What impacted the shape of Article 370? Why was Jammu and Kashmir treated as it is and not as a part of the Union like the other States?"

Mr. Shah delved into the history of the country and submitted that J&K, Junagadh and Hyderabad were the only the States left which had not readily acceded to the Union of India. However, the circumstances for J&K were different.

"In the case of all other States, there were primarily three documents which had been executed:

1. IOA – This meant that you have not fully seceded from the Union.

2. Standstill agreement – This meant that the state of affairs were to be at a standstill.

3. Merger agreement – This categorically entails that the life of the State comes to an end as it had fully merged with the Union.

In the case of J&K, there was only an IOA, and no standstill agreement or merger agreement.", he explained.

On the basis of the aforementioned submission, if any law had to be legislated in J&K, it could only be done in consultation or concurrence with the State. Article 370 provided that whatever the legal effect was, this consultation/concurrence had to be taken. Therefore, apart from the three matters enumerated in the Schedule of the IOA, for the rest, the State had to be consulted.

In general, for other States, if the Parliament intended to legislate for a State, first a constitutional entry had to be made applicable to the State and then only the law could be legislated. However, Article 370 found a different way which left the legislation to the State Government. Therefore, there was a deliberate intention behind retainment of the Article; doing away with it would entail snapping ties with the State.

"This allows the State its own Constitution and allows it to regulate its own affairs. This is why we have a separate Constitution. Otherwise there would not have been any need. The framers of the Constitution understood that a need existed for separate provisions. We have a situation where we have two Constitutions functioning in parallel. There has been a conscious effort to continue this."

With reference to Sampat Prakash decision, Mr. Shah stated that while the judgement envisioned Article 370 as a temporary provision, it also highlighted the fact that situation under which Constitution of J&K had been enacted, it had failed to change.

"So, on the basis of the situation, the provision is still continuing. Article 370 has to stay as long as the situation remains the same."

Mr. Shah then expressed shock at the events which transpired on 05.08.2019, wherein the Presidential Order C.O. 272 was instituted whereby Constitution (Application to Jammu and Kashmir Order, 1954 (and its subsequent amendments) were superseded and all provisions of the Constitution of India were to be applied to J&K. The question raised by Mr. Shah was that if this was indeed the case, then why did Article 368 (Power of Parliament to amend the Constitution and procedure therefor) not apply.

He also raised the issue regarding the substitution of the Constituent Assembly with the Legislative Assembly.

"The power of the CA is unlimited; its roots are in the will of the people. It is beyond challenge. How can they substitute it? The court will have to go into the depths of this issue. I am merely describing the contours of this controversy."

With regard to that, Mr. Shah stated:

"The Court observed that the vestige of sovereignty does not remain for any State. But, I submit that this does not hold true for the State of J&K. We have our constitutional autonomy. It is a guaranteed right for J&K. It is guaranteed by the Constitution of India as well as the framework and working of both the Constitutions. Similarly, Clause 8 of the IOA, starting with a non-obstante clause, also states that the sovereignty of the State is not affected."

Sr Adv Shah continues. So far as governance is concerned, it will continue to vest in the people of the State. It needs to be understood in the context of IOA. For governance, we will continue to have our power to legislate and this will be with our concurrence and consultation.

"It needs to be understood in the context of IOA. For governance, we will continue to have our power to legislate and this will be with our concurrence and consultation. Article 370 subsumes the sovereignty of the State. Within the framework of the Constitutions, you have yours and we have ours. This was the method which has been followed in the last 70 years."

To buttress the aforementioned submission, Mr. Shah cited Promod Chandra Deb v. State of Orissa [AIR 1962 SC 1288] to state that the existence of a Standstill Agreement and Merger Agreement were paramount for the complete transfer of sovereignty of a State. The same was reiterated by citing the case of State of Gujarat v. Dr. R.B. Chandrachud [1969 SCC (1) 300].

Justice Kaul then questioned Mr. Shah on his views on the conflict between the two judgments (Prem Nath Kaul and Sampath Prakash), to which Mr. Shah responded that he did not perceive a direct conflict as such. However, it was possible that certain aspects had not been considered. If the inference regarding the ending of the Constitutional provision in 1957 was correct, then the judgement of Sampat Prakash differed.

Justice Kaul then stated that unless a direct conflict existed, the matter could not be referred. Accordingly, Mr. Shah was asked to give his perception on the issue in writing. The matter will continue to be heard tomorrow.

Senior Advocate Sanjay Parikh had made submissions in the forenoon session. Report of that may be read here.