[Article 370] [Day-1] The Proposal To Alter Article 370 Must Emanate From The People of Jammu And Kashmir, Submits Raju Ramachandran 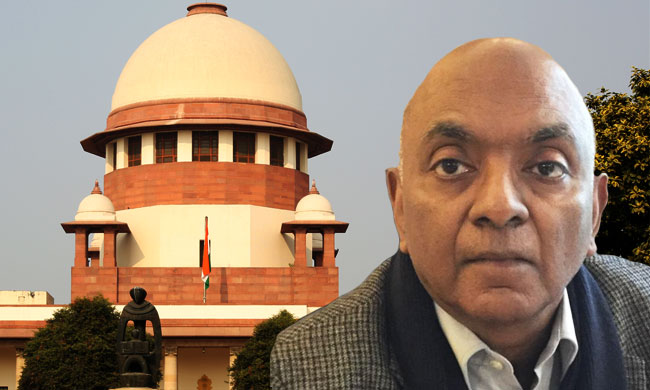 The Supreme Court Constitution Bench comprising Justices N V Ramana, Sanjay Kishen Kaul, R Subhash Reddy, B R Gavai and Surya Kant has commenced the hearing of the petitions challenging the Presidential Orders under Article 370 which revoked the special status of Jammu and Kashmir."Whether using the temporary, ameliorative and restorative power of President's Rule, an irreversible change can...

"Whether using the temporary, ameliorative and restorative power of President's Rule, an irreversible change can be brought about in the federal relationship between a state of the Union and the Union? Under a legal fiction created by Article 356, without any participation of the popularly elected republic government in the state, altering its identity and splitting it into two UTs? When Article 370 itself prescribes the mechanism for alteration of that relationship, can that mechanism be flouted?", Senior Counsel Raju Ramachandran explained the controversy in the abrogation of Article 370 in a nutshell.

"C. O. 272, C. O. 273 and the Reorganisation Act are unconstitutional for the use of the power under 356, ultra vires Article 370. There is violation of Article 3 (The bench pointed out that the basic structure too is hit)...The Presidential Proclamation violates federalism", he submitted.
He proceeded to read the instrument executed by Maharaja Hari Singh of J & K on October 26, 1947 acceding the state to the Dominion of India, stressing that the instrument was expressly binding on the heirs and successors of the ruler of the state.
He also relied on Lord Mountbatten's acceptance of this Instrument of Accession on the very next day.
"So the accession to India is complete. And the J & K constitution declares that the state is an integral part of India", said Mr. Ramachandran.
He moved on to discuss Article 370(2)(b) which speaks of the power of the Parliament to make laws for the state.
Distinguishing between "consultation", as used in paragraph (i) of the sub-clause, and "concurrence", as in paragraph (ii), he explained that the matters already conceded to the Union under the Instrument of Accession, only call for a consultation with the state government -
"it only equates those matters to the matters in the Union List, so consultation is enough", he advanced. "Concurrence" of the state government is needed in respect of subjects not covered under the Instrument of Accession.
"Where 'concurrence' is needed to be given, the concurrence given by the government also had to be placed before the Constituent Assembly of the state...it means that the people of J & K have to approve of the arrangement...", said Mr. Ramachandran in reference to clause (2) of the Article.
Indicating clause (3), as per which the President may notify that Article 370 shall cease to operate or operate in an abridged form on a recommendation of the Constituent Assembly of the state, he contended,
"The recommendation implies that a proposal to alter the constitutional arrangement must emanate from the people of J & K through their then-existing Constituent Assembly. The Union Executive has the power to issue a notification only upon such recommendation...there is no role of the Union Parliament!...In C. O. 273, the recommendation of the Constituent Assembly has become that of the Parliament!"
Proceeding to elaborate the provisions of the J & K Constitution, he suggested that its section 92, on Governor's Rule, has an outer limit of 6 months from the date of issue, and it is for this reason that President's Rule was invoked in the present case.
He drew the bench's attention to the second Proviso to section 147, which stipulates that no Bill for amendment in sections 3 and 5 or the provisions of the Constitution of India as applicable in relation to the state shall be introduced or moved in either House of the Legislature-
"it means that the existing constitutional arrangement as in 370 cannot be touched by the legislature of J & K. It can be changed only in the way envisaged in 370 itself, which is in the hands of the Constituent Assembly. Now the work of the Constituent Assembly is done and dusted and the state legislature cannot do anything. That is the purport of the section", ventured Mr. Ramachandran.
"What is the effect of the proviso as per you?", the bench inquired.
"The Legislature of the state of J & K does not possess the constituent power to alter the relations between the state and the Union. It is vested only in the constituent assembly...The Parliament cannot have more power under 356 than what the legislative assembly has", responded the Senior Counsel.
Referring to Article 357(2), he averred that where a legislation is made by the Parliament under Article 356 to substitute a state legislation, there is an inbuilt reversibility in it as after the Proclamation under 356 ceases to operate, it can be done away with by the subsequent legislature or other authority.
"Contrast this with the irreversibility of what has happened as far as 370 and the relation between the state and the union is concerned. What was otherwise reversible under 357(2) has become irreversible!", he argued.
"President's Rule allows the Parliament to exercise only those powers which are available to the state Legislature. They cannot go beyond that scope", he emphasised.
He cited the proviso to Article 3 which states that no Bill (for the formation of new states etc) shall be introduced in either House of Parliament except on the recommendation of the President and unless, where the proposal contained in the Bill affects the area, boundaries or name of any of the states, the Bill has been referred by the President to the Legislature of that state for expressing its views.
"Never has a state been reorganised during President's Rule...it happened once in the reorganisation of Punjab when Punjab and Haryana were created while President' Rule was in force...it was challenged before the Delhi High Court..."
"Here, the Governor giving concurrence to such a decision is basically the Union giving concurrence to itself!. President's Rule puts the Governor in charge instead of the state Legislature. Then, the Governor gives concurrence despite being a representative of the Union! This means that the concurrence of the State Legislature, which represents the will of people, was completely ignored!"
"For exercise of the constituent power under Article 370(3), the Parliament cannot step in!", reiterated Mr. Ramachandran.

In as much as C. O. 272 lays down that in proviso to clause (3) of Article 370 of the Constitution, the expression "Constituent Assembly of the State referred to in clause (2)" shall read "Legislative Assembly of the State", he urged, "the nature of the power of the body is changed from constituent to legislative! Under section 147, it did not possess any constituent power! Then, by the 356 route, the legislative assembly became the parliament! This is impermissible!