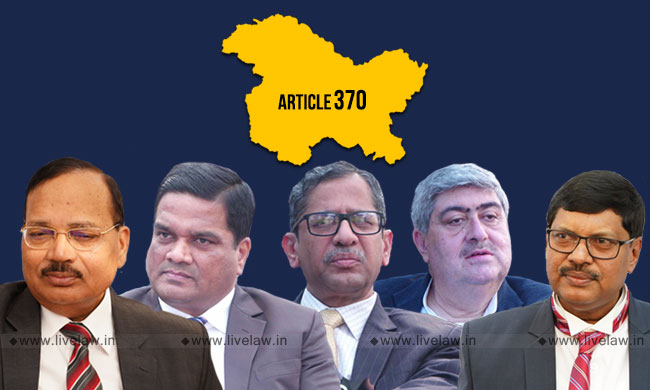 The Supreme Court on Monday held that there was no need to refer to larger bench the petitions challenging the Presidential Orders issued under Article 370 on August 5 and 6 to repeal the special status of Jammu and Kashmir.

The bench on Monday rejected this submission by observing :

"the Constitution Bench in the Prem Nath Kaul case (supra) did not discuss the continuation or cessation of the operation of Article 370 of the Constitution after the dissolution of the Constituent Assembly of the State. This was not an issue in question before the Court, unlike in the Sampat Prakash case (supra) where the contention was specifically made before, and refuted by, the Court. This Court sees no reason to read into the Prem Nath Kaul case (supra) an interpretation which results in it being in conflict with the subsequent judgments of this Court, particularly when an ordinary reading of the judgment does not result in such an interpretation".

It was held that the context of Prem Nath Kaul case was different, as it was dealing with the validity of a legislation passed by the Yuvraja of J&K before the sitting of the Constituent Assembly of Jammu and Kashmir.

During the 6 days of hearing in the case so far, the bench has heard Senior Advocates Raju Ramachandran ,Dinesh Dwivedi, Gopal Shankaranarayanan, Z A Shah and Sanjay Parikh.

Click here to read the reports of daily hearings so far.