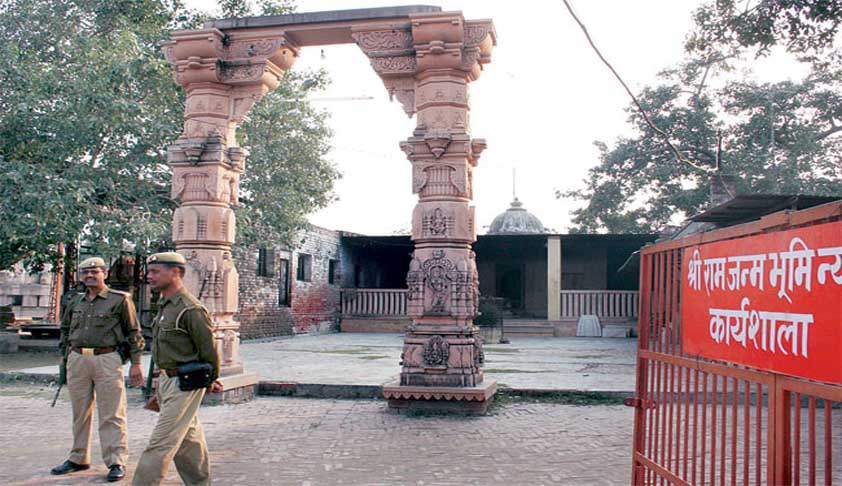 The constitutional validity of The Acquisition of Certain Area At Ayodhya Act, 1993, as per which Central Government acquired 67 acres of land adjacent to the disputed site in Babri Masjid- Ram Janmabhoomi case was acquired, has been challenged in the Supreme Court by a petition filed by seven persons, who claim to be followers of Sanathan Dharma and worshippers of Lord Rama.The main argument...

The constitutional validity of The Acquisition of Certain Area At Ayodhya Act, 1993, as per which Central Government acquired 67 acres of land adjacent to the disputed site in Babri Masjid- Ram Janmabhoomi case was acquired, has been challenged in the Supreme Court by a petition filed by seven persons, who claim to be followers of Sanathan Dharma and worshippers of Lord Rama.

The main argument of the petitioners is that Parliament lacks the legislative competence to enact the law,  as land is an exclusive subject matter of State. As per Article 294 of the Constitution, lands within a state are vested with the state government, which in this case is the State of Uttar Pradesh. Parliament cannot acquire a land vested with the State Government, contends the petitioners.

It is further contended that the acquired site was a place of pilgrimage and a historical monument. The exclusive right to make laws on the subjects of pilgrimage sites and historical monouments(which are not declared to be of national importance) is with the State Legislature, as per entries 7 and 12 of List II of Seventh Schedule.They also point out that the Act was enacted in the interests of public order, to maintain peace and communal harmony, as discernible from its preamble. Law and order is the exclusive reserve of state legislature, upon which the Parliament cannot legislate.

The petitioners further contend that the Act infringed the religious right of worshippers of Lord Ram :

"The Parliament or the Legislature has no power to infringe the right of pilgrimage and worship of Hindu devotees at the places of worship standing in the vicinity of the disputed structure. The Hindus have right to perform Puja, Arti, Bhog and other rituals at the places of worship in the temple, Ashram, Dharmshalas situated near the disputed structure. The Union or the States have no power to stop puja and other religious activities at such places.

The impugned Act is ultra vires to Article 25 of the Constitution of India in so far it restricts the rights of Hindus to perform Darshan and Puja in the temple and Dharmshalas and other place of worship situated in and around the disputed structure", the petition states.

They allege that a very large area unconnected with the property in dispute has been acquired. No public purpose will be served by acquiring such a large area at the cost of religious sentiments of Hindus. There is no reasonable basis to uphold the acquisition of such unconnected large area with the disputed site.

"The impugned Act is unreasonable and has been enacted at the cost of Hindu sentiments infringing their right to religion guaranteed by Article 25 of the Constitution of India and as such the same is liable to be struck down."

It may be noted that validity of the Act and the acquisition was upheld by the Supreme Court in 1994 in the decision Dr. Ismail Faruqui vs Union of India. Later, in In case of Mohd. Aslam Alias Bhure vs. Union of India& Ors the Supreme Court  held that status quo will be operative over the entire property till the final adjudication of the matter.

The petitioners however claim that the points and issues raised by them have not been raised and dealt with in case of M.Ismail Faruqui and, Mohd. Aslam Alias Bhure or in any other case till date.