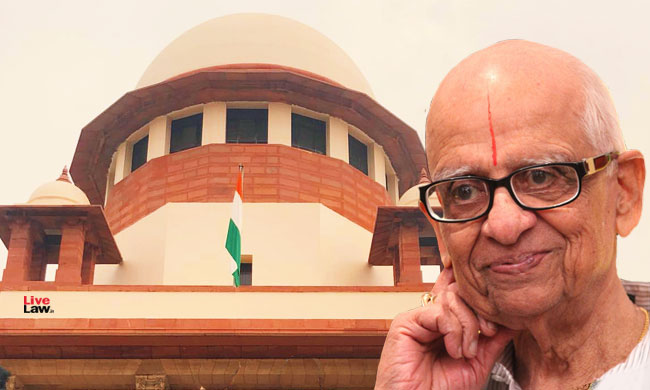 "The question has been if its a temple or a mosque. (Either way) it is one integrated entity. You can't say that physically 'you take this', 'you take this'. You can't partition an institution or bisect it", began Senior Advocate K. Parasaran for Ram Lalla on Day 3 of the hearing in the Ram Janmabhoomi-Babri Masjid dispute. He mentioned the tale of King Solomon who was faced with two...

"The question has been if its a temple or a mosque. (Either way) it is one integrated entity. You can't say that physically 'you take this', 'you take this'. You can't partition an institution or bisect it", began Senior Advocate K. Parasaran for Ram Lalla on Day 3 of the hearing in the Ram Janmabhoomi-Babri Masjid dispute.

He mentioned the tale of King Solomon who was faced with two woman claiming the same infant child as their own. Solomon had bluffed the proposal to cut the baby in half with a sword so that each could have half, as a solution to the dispute. "The real mother said 'don't do this'", narrated Mr. Parasaran.

He proceeded to discuss the concepts of Janmasthan and Janmabhoomi- "'Janmabhoomi' is the whole thing. 'Sthan' means a place, town or locality; not the entire surroundings...'Teerthyatra' (pilgrimage) is to a 'sthan'"

"The Janma Sthan has become a personification of the deity and hence, an object of worship. It is believed that the God's spirit lives in the Sthan. This faith is itself evidence that the Sthan is where Lord Ram was born", he had submitted on Wednesday.

"It can be established by proof of reasonable belief...we can not only go forward but also backward...the dispute has not arisen today", continued Mr. Parasaran on Thursday.

"How is 'sthan' a juridical person", asked Justice Ashok Bhushan, the 'janmasthan' being the second plaintiff in the suit.

"Can a source of worship be a juridical person? Not just the physical form of the idol but the divine identity that the idol symbolises? That the 'sthan' is a juridical person is founded in the belief that this place is an object of worship...", observed Justice D. Y. Chandrachud.

"The Uttarakhand High Court has said that a river is a legal person", noted Justice S. A. Bobde.

"The concept of a juridical person is not executive but judicial. It is entirely within Your Lordships judicial power to say", responded Mr. Parasaran.

On the point of limitation, the discussion veered to whether the placing of the idols in the mosque in December, 1949 was a continuing wrong.

On Wednesday, Mr. Parasaran had said that the act of placing the idols in the masjid was a complete act and could be a continuing consequence of a wrong which was "snapped" by the order of the court for attachment of disputed property and the appointment of the receiver.

"If everyday a person is stopped from worshipping at the usual place of worship because of the act of another person, is it not a continuing wrong qua that person? Placing of the idols may be a completed act but not being able to go to the mosque is a continuing wrong", asked Justice Bobde.

"A continuing injury and not wrong. A wrong may affect your rights and hence, an injury happens. But the wrong is only once. The injury is the continuous consequence of a wrong", asserted Mr. Parasaran

Reference was made to an earlier decision where a dispute arose because alterations had been made by the Swetambaris (one of the two Jain sects) in the character of the 'charans' in certain shrines and the Digambaris complained that the said alterations amounted to an interference with their rights. It had been found by the courts in India that the charans in the old shrines were the impressions of the footprints of the saints each bearing a lotus mark. "This the Digambaris refused to worship as being a representation of a detached part of the human body". The question which the Privy Council had to consider was whether the action of the Swetambaris in placing the said charans in three of the shrines was a continuing wrong or not; and in answering this question in favour of the plaintiffs, it was observed that there is no doubt that the impugned action did not amount to ouster or complete dispossession of the plaintiffs.

"But the difference is that nobody had closed the doors of the temple there. Here, after one party placed the idols, did the other side have access (to the property)?", questioned Justice Bobde.

The hearing will continue on Friday