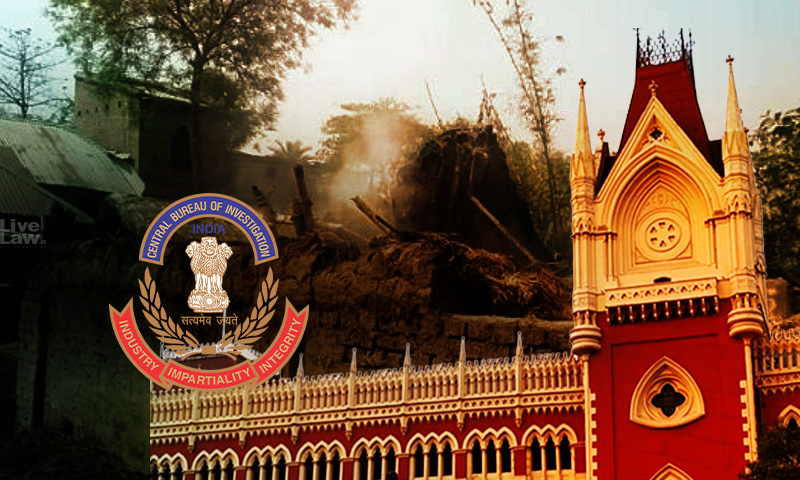 The Calcutta High Court on Friday transferred to the Central Bureau of Investigation (CBI) the investigation into the violence in Birbhum district of West Bengal, in which 8 persons were killed allegedly in retaliation to the murder of local All India Trinamool Congress (TMC) leader Bhadu Sheikh.The Court issued the direction after expressing dissatisfaction with the investigation conducted...

The Calcutta High Court on Friday transferred to the Central Bureau of Investigation (CBI) the investigation into the violence in Birbhum district of West Bengal, in which 8 persons were killed allegedly in retaliation to the murder of local All India Trinamool Congress (TMC) leader Bhadu Sheikh.

The Court issued the direction after expressing dissatisfaction with the investigation conducted so far by the State constituted State Investigating Team (SIT) headed by additional director general of police (CID) Gyanwant Singh.

A Bench comprising Chief Justice Prakash Shrivastava and Justice Rajarshi Bharadwaj on Friday observed that in the interest of justice and to instill confidence in the society and to have fair investigation to dig out the truth it is necessary to hand over the investigation to the CBI. The Bench also directed the State constituted SIT to not carry out any further investigation into the matter from the time the same is handed over to CBI.

Directing for the transfer of investigation to the CBI from the State constituted SIT, the Court underscored,

"On minute examination of the case diary, we are of the opinion that the investigation as expected, keeping in view the gravity of the offence, has not been done. We are not mentioning the details of lacuna noticed in investigation as it may prejudice the rights of the parties. We also find that this is one such exceptional case where requisite direction is required. It is pertinent to mention here that expeditious steps are required to be taken to hand over the investigation to an independent investigating agency because there is an allegation of an attempt to wipe off the evidence"

The Court further noted that although the SIT had been constituted on March 22 however, there has been no effective contribution of the SIT in the investigation till date.

"The case diary of the incident has been produced before us. We have minutely examined it. We find that though the SIT was constituted on 22.03.2022 but till now there is no effective contribution of the SIT in the investigation", the Court remarked.

The Court further took into consideration the serious apprehensions expressed by the petitioners regarding the possibility of a fair investigation in the hands of local police or the SIT. The petitioners had submitted that the incident is a result of a political group rivalry and that the killings took place after Bhadu Sheikh, a TMC leader and upa pradhan of Boroshal gram panchayat, was allegedly murdered by some miscreants on March 21 at around 8:30 pm.

Noting that the petitioners had alleged that attempts are being made to eliminate evidence, the Court observed,

"We have already taken note of serious apprehension expressed before this Court about fair investigation in the hands of local police or SIT by raising the plea that the incident is the result of political group rivalry and counter-blast of the murder of an Upa-Pradhan belonging to a particular group of the ruling party and submission that the attempt is being made to destroy the evidence and cover up the incident."

The Court further placed reliance on a communication dated March 22 wherein Chief Minister Mamata Banerjee had mentioned that the deceased Upa-Pradhan was an important part of the TMC Party functionary.

During the hearing, the petitioners had cast aspersions on the independence of the State constituted SIT by alleging that Gyanbant Singh, Additional Director General of Police, CID, West Bengal who is heading the SIT had been accused of the commission of murder of Rizwanur Rahaman back in 2007. As a result, he had been kept out of the police force till 2014. It was also submitted that Singh had been subsequently summoned in 2021 in relation to a coal smuggling scam of rupees one thousand three hundred crores.

Dismissing the Advocate General's argument that Singh had been exonerated of all such criminal charges and taking into consideration the allegations levelled by the petitioners, the Court observed,

"Though learned Advocate General has submitted that in respect of the allegation of murder no charge sheet was filed against him but it remains undisputed that such an allegation was made against him."

Various submissions of the petitioners pertaining to the inefficient investigation carried out by the SIT were also taken cognisance of and accordingly the Court recorded in its order,

"It has been submitted that in spite of the fact that the police station is very near to the spot of incident, the police did not reach on time and persons trapped inside the houses were kept on burning. Counsel for the petitioners have pointed out the procedure which was required to be followed in investigation by using tower damping technology to ascertain the presence of accused on the spot, manner of collection of samples and seizures, the videography of the collection of sample, recording of the evidence of the witness under Section 161 and 164 of the Cr.P.C., recording of dying declaration, etc."

Furthermore, the Court opined that the 'undisputed shocking incident' has nationwide ramifications and that the national media reports are flooded with the news of this 'unfortunate' incident.

Opining on the scope of judicial intervention in such matters, the Court noted that it can exercise its powers to order for a CBI probe when it becomes necessary to provide credibility to the investigation and instill confidence in society. It was also observed that such a direction can also be issued where the incident may have national ramifications or where such an order may be necessary for doing complete justice and for enforcing the fundamental rights of citizens.

Reliance was also placed on a host of Supreme Court judgements such as Gudalure M.J. Cherian and Others vs. Union of India, R.S. Sodhi v. State of U.P. and Others and Punjab and Haryana High Court Bar Association, Chandigarh vs. State of Punjab and Others among others wherein the Apex Court had directed for a CBI probe to protect the fundamental rights of the citizens.

The Court also referred to the Calcutta High Court decisions in Association for Protection of Domestic Rights vs. State of West Bengal and Others and Bar Association of High Court at Calcutta wherein a CBI probe had been ordered after taking into consideration that there is a possibility of tampering of evidence due to the involvement of the ruling party.

The violence in Birbhum's Bogtui village took place following the alleged murder of Bhadu Sheikh, a panchayat leader of the ruling Trinamool Congress. He died after miscreants allegedly hurled bombs at him on Monday night.

Hours later, violence erupted and several houses, including two belonging to the men accused of Sheikh's murder, were allegedly attacked and set on fire resulting in eight deaths, including that of women and children. Seven charred bodies were recovered from one house alone, while one person died of injuries in a hospital in the district.

The police have filed two first information reports, one in connection with Sheikh's death and the second related to the attack on the houses. At least 22 people have been arrested so far in connection with the violence. Eleven of them were held on the day of the incident only.

Taking cognisance of the violence, the State government has formed a Special Investigation Team (SIT) headed by the additional director general of police (CID), Gyanwant Singh, to probe the incident. The Sub Divisional Police Officer and in-charge of Rampurhat police station has also been removed from active policing duty.

The incident has led to a a war of words between the TMC and the BJP. The issue also resulted in BJP MLAs staging a walkout inside the West Bengal Legislative Assembly. Describing the death of eight people at Rampurhat as horrific, West Bengal Governor Jagdeep Dhankhar on Tuesday said it indicates that the state is in the grip of a culture of "violence and lawlessness". Calling upon the police to deal with the matter professionally, the Governor said that he has asked the state chief secretary to send him an update on the incident urgently.

According to reports, Chief Minister Mamata Banerjee on Thursday met the families of the victims and announced Rs 2 lakh compensation for rebuilding the scorched homes. Promising jobs to ten families affected by the violence, Banerjee added that she would ensure "speedy justice".

The National Human Rights Commission (NHRC) on Thursday took suo motu cognizance of the matter and issued notices to the Chief Secretary and the Director General of Police, West Bengal calling for a detailed report in the matter within 4 weeks including the status for the FIRs registered in the matter, steps taken to ensure safety of the people in the village and any relief or rehabilitation provided by the State Government.

Case Title: The Court on its own Motion In re: The Brutal Incident of Bogtui Village, Rampurhat, Birbhum