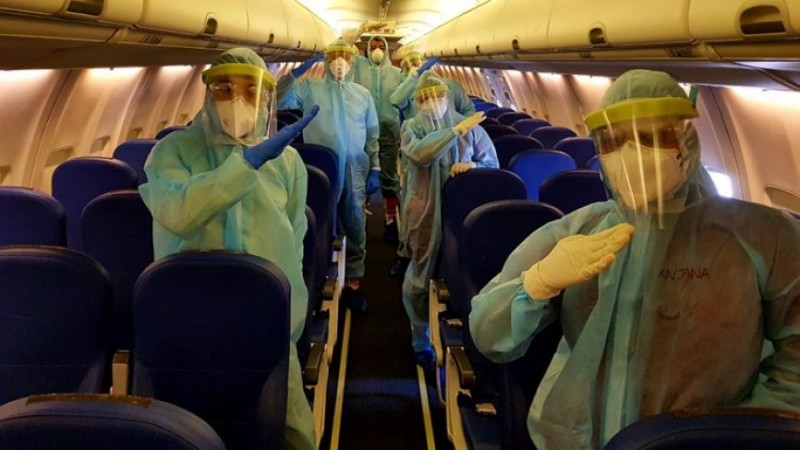 The Bombay High Court on Friday passed an interim order to allow all airlines to keep middle seats occupied in compliance with May 31 circular issued by the Directorate General of Civil Aviation.The order was passed after an Expert Committee headed by Secretary, Ministry of Civil Aviation informed the Court that mere touch of a person infected with Covid-19 will not lead to transmission of...

The Bombay High Court on Friday passed an interim order to allow all airlines to keep middle seats occupied in compliance with May 31 circular issued by the Directorate General of Civil Aviation.

The order was passed after an Expert Committee headed by Secretary, Ministry of Civil Aviation informed the Court that mere touch of a person infected with Covid-19 will not lead to transmission of the deadly virus, unless droplets from the mouth or nose of Covid positive person through sneezing or coughing come in contact with hands, mouth, nose of a non-covid person increases the chances of infection.

The DGCA had advised airlines to keep middle seats vacant as per its circular issued on May 31. If the middle seat cannot be kept vacant due to high passenger load, then its occupant should be provided protective equipment lquipment like wrap-around gowns of standards approved by Ministry of Textiles in addition to the face mask and face shield, said the May 31 circular.

A Division bench of Justice SJ Kathawalla and Justice SP Tavade was hearing the writ petition filed by Commander Deven Y Kanani of Air India who relied upon circular issued by the Government of India dated March 23 and alleged that the national carrier violated the said circular by failing to follow the rule of keeping the middle seat empty during evacuation of stranded passengers as part of the Vande Bharat Mission.

Solicitor General Tushar Mehta appeared on behalf of the DGCA and submitted the Committee's reply before the bench. The reply states-

"Covid-19 virus can be transmitted by touch only under certain circumstances. For example, lf a surface, like clothes, is infected with Covid-19 virus (such infection will take place when the droplets from the mouth or nose -sneezing or coughing- of an infected person sit on such a surface) and a non-infected person touches it and then touches his mouth or nose, then there are chances that the second person may get infected. This is the reason why it is recommended that a person should disinfect his hands regularly.

If an infected person merely touches a non-infected person the virus will not be transmitted unless the conditions mentioned above are fulfilled, that is the transmission has to take place through the droplets carrying the virus sitting on clothes and ultimately these reaching the mouth, nose or eyes of the other person".

Moreover, the Court had also enquired from the respondents on Wednesday regarding the total number of passengers who were evacuated under the Vande Bharat Mission from different countries, who actually tested positive for Covid-19 after landing in India and were not positive before taking the flight.

The affidavit-in-reply filed by Air India states that under the rescue mission a total of almost 59000 Indian Nationals have been brought back and evacuated from various countries of the world, out of which 248 passengers tested positive for Covid-19.

Moreover, there are 21 cases of Cabin Crew who have tested positive out of around 5000 tested. And, there is one case of death of a "casual employee" at Mumbai who had last attended the office on April 26, 2020 and he had died in a hospital on May 18. Besides, he was deployed in the office and not for flight duties.

"In the meantime, the Flight Operators including Respondent Nos. 2 and 3 shall allow the passengers to occupy the middle seat strictly in compliance with the Circular dated 31st May, 2020 and the applicable SOPs / circulars / guidelines issued from time to time by the concerned authorities."

On May 22, the HC had ordered that the DGCA instruction to keep middle seats empty was applicable to the non-scheduled international flights operated by Air India.

Aggrieved with that, Air India moved the SC, arguing that DGCA circular is applicable only for scheduled domestic flights.

On May 25, the SC granted a partial relief to Air India, allowing it to operate with middle seat bookings for ten days, and disposed of the matter urging Bombay HC to finally decide the issue at the earliest.