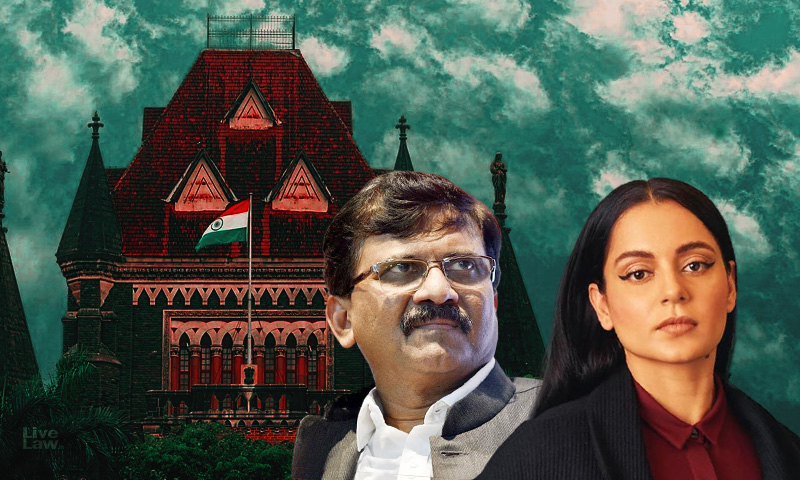 During the hearing of the case filed by Hindi film actor Kangana Ranaut against the demolition of her building by the Mumbai civic body, the Bombay High Court on Monday played the audio clip of Shiv Sena leader Sanjay Raut's statements against her.A bench comprising Justices S J Kathawalla and R I Chagla asked Dr. Birendra Saraf, Senior Advocate appearing on behalf of Kangana, to play the...

During the hearing of the case filed by Hindi film actor Kangana Ranaut against the demolition of her building by the Mumbai civic body, the Bombay High Court on Monday played the audio clip of Shiv Sena leader Sanjay Raut's statements against her.

A bench comprising Justices S J Kathawalla and R I Chagla asked Dr. Birendra Saraf, Senior Advocate appearing on behalf of Kangana, to play the audio clip. This was after Saraf submitted that the demolition was vitiated by malice as it was a vindictive action against Ranaut for her remarks against the Maharashtra government.

Saraf submitted that Raut had used derogatory language against the actor by calling her "haraamkhor" and had said that she needs to be "taught a lesson".

At this stage, Justice Kathawalla asked for the clip to be played in the video conference hearing.

After the clip was played, Raut's lawyer, Advocate Pradeep J Torat, submitted that his client had not taken Ranaut's name in his statement.

In response, Justice Kathawalla asked Torat if the court can record his statement that Raut was not referring to Kangana Ranaut.

"Are you saying your client has not called her a haraamkhor ladki? Can we record the statement that you(Raut) have not called the petitioner 'haraamkhor'?", Justice Kathawalla asked Torat.

Torat replied that he will file an affidavit tomorrow.

Raut was added as a respondent in the case after Ranaut raised allegations of malafides against him,

Ranaut's lawyer submitted that the demolition action was vitiated by both 'malice in law' and 'malice in fact'.

"It cannot be disputed that there is a great deal of angst against my client. In recent times the petitioner has been at loggerheads with the Maharashtra Government over the way in which certain issues have been handled. This displeased certain quarters", Saraf submitted.

Saraf added that the demolition order was passed soon after Raut made the statements.

"If authorities are acting with high-handedness and in violation of statutory provisions and court directives, there is 'malice in law', irrespective of their intention", Saraf explained.

A news channel in which Raut was the Deputy Editor covered the news of demolition in a manner "as if they were rejoicing at it", Saraf said. He also highlighted that Shiv Sena was ruling the BMC.

Senior Advocate Aspi Chinoy, appearing for the Brihanmumbai Municipal Corporation (BMC), raised a doubt as to whether Raut's statement was in response to Ranaut's tweet. Hinting that Raut's statement preceded the tweet of Ranaut, Chinoy sought the tweet to be produced, to verify its timing. Chinoy pointed out that the tweet was not part of the record.

Saraf replied that Ranaut had been raising criticism against the Maharashtra government for quite some time. He also said that he will produce all the tweets today at 3 PM.

The Court also asked for the full transcript of the interview of Raut to be placed on record.

When Saraf said that he will also produce a later interview of Raut where he explained what he meant by 'haraamkhor', Justice Kathawalla remarked: "We also have dictionaries!".

J Kathawalla asked in response : Then what does 'naughty' mean!

The Court will resume the hearing at 3 PM, when it will hear the BMC.

Complete updates of the hearing so far today may be read here.