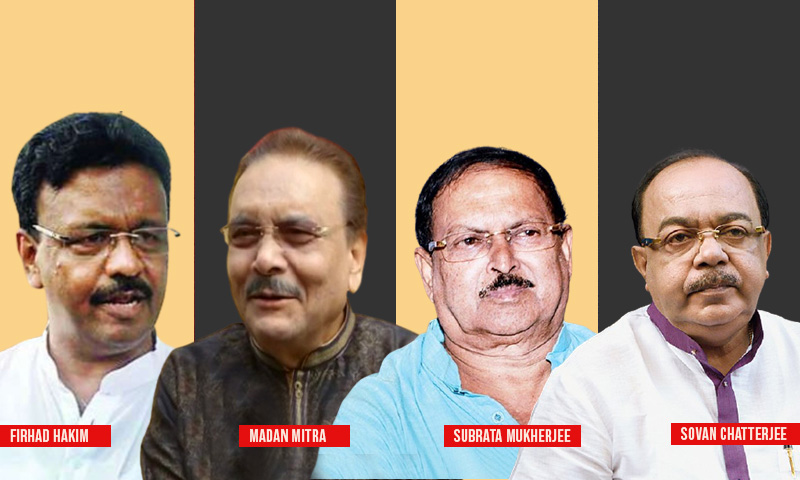 A division bench comprising Acting Chief Justice Rajnish Bindal and Justice Arijit Banerjee passed the stay order on an application filed by the CBI seeking transfer of trial citing the dharna staged by Chief Minister Mamata Banerjee against the arrest of TMC ministers.

The High Court noted the submissions made by Solicitor General of India Tushar Mehta that the law minister of the State went to the court where the accused were to be presented, along with a crowd of 2000-3000 supporters, who remained in the court throughout the proceedings.

The Solicitor General said, "It is a case in which there is total failure of rule of law".

Taking note of these submissions, the High Court observed :

"The Law Minister remained in the court complex throughout the day till the arguments were heard. In these facts and circumstances if any order is passed by the Court the same will not have faith and confidence of the people in the system of administration of justice".

"Confidence of the people in the justice system will be eroded in case such types of incidents are allowed to happen in the matters where political leaders are arrested and are to be produced in the court. People may have a feeling that it is not rule of law which prevails but it is a mob which has an upper hand and especially in a case where it is led by the Chief Minister of the State in the office of CBI and by the Law Minister of the State in the Court Complex".

It, therefore, stayed the order of special CBI court and ordered that the arrested leaders be kept in judicial custody.

Advocate General for the State of WB submitted that CBI officers were provided full protection by the local police for discharge of their duty. There is no official complaint filed by the CBI with the police about any incident. The AG also said that a proper application for transfer in terms of Section 407 of the Code of Criminal Procedure has not been filed by the CBI.

The High Court however said that the situation prevailing in the trial court, as pointed out by the Solicitor General, was sufficient to take cognizance of the matter for consideration of issue regarding transfer of trial.

"We are not touching the merits of the controversy but the manner in which pressure was sought to be put will not inspire confidence of the people in the rule of law. As during the period when the arguments were heard, the order was passed by the Court below, we deem it appropriate to stay thatorder and direct that the accused person shall be treated to be in judicial custody till further orders. The authority in whose custody they are kept shall ensure that they have all medical facilities available as are required and they are treated in terms of the provisions of the Jail Manual", the HC said in its order.

The matter will be considered for further hearing tomorrow, May 19.

The Court began its order by referring to the "extra-ordinary situation" of the Chief Minister Mamata Banerjee and Law Minister Moloy Ghatak leading a large mob of supporters to protest the CBI's arrest of four TMC leaders.

"This court has been called upon to deal with an extra-ordinary situation where Chief Minister of the State can sit on a dharna outside the office of the Central Bureau of Investigation (for short, 'CBI')along with her supporters,which had investigated the case and was to present a charge-sheet in court against the accused who are senior party leaders of the party in power in the State, some of them being Ministers. Not only this, the Law Minister of the State was present in Court where the accused were to be presented along with mob of 2000 to 3000 supporters", the Court said in the order.

"This court has been called upon to deal with an extraordinary situation where Chief Minister of the State can sit on a dharna outside the office": #CalcuttaHighCourt while staying bail given to West Bengal ministers and leaders arrested by CBI#NaradaScam pic.twitter.com/KLKpqs2nN9

Earlier today, they were arrested in connection with the Narada sting operation, which allegedly exposed cash for favors scam involving some of the top leaders of the Trinamool Congress. They were taken into custody and remanded to Judicial Custody till May 31, 2021.

The Court noted that as against the accused Madan Mitra, Firhad Hakim @ Bobby Hakim, Subrata Mukherjee and Sovan Chatterjee, the investigation had been completed.

Though there is a prayer for further investigation as against other FIR named accused persons but on behalf of the I.O. there is no prayer for CBI custody of the arrested persons noted the Court.

On the other hand, the Court also took into account the judgment of the Apex Court, in which the Court had opined that the overcrowding of the accused in the prison might have an effect of the infection of the COVID-19 which should not be encouraged.

Accordingly, the Court said that the Apex Court had directed the authorities concerned to decongest the prison for avoiding the infection in between the inmates.

"Over and above when the purpose of investigation has already been completed as against the arrested persons Sir Madan Mitra, Firhad Hakim @ Bobby Hakim, Subrata Mukherjee and Sovan Chatterjee and where there is no prayer for C.B.I custody for further interrogation, mere prayer for judicial custody can not be the ground for detention of the arrest persons", ruled the Court.

Considering all these aspects, the accused persons namely Madan Mitra, Firhad Hakim @ Bobby Hakim, Subrata Mukherjee and Sovan Chatterjee were granted interim bail of Rs. 50000/- each with two sureties of Rs. 25000/- each.