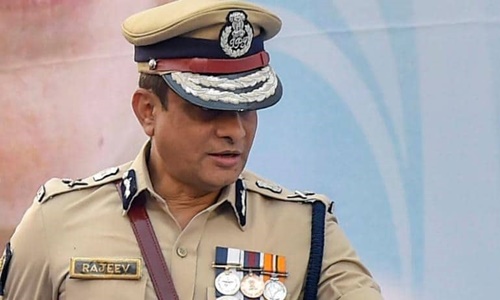 Supreme Court on Friday vacated the interim protection from arrest granted to Kolkata Police Chief Rajeev Kumar in connection with the Saradha Chit Fund scam. However the Court has given him 7 days' time to approach appropriate forum.The bench of Chief Justice of India Ranjan Gogoi with Justices Deepak Gupta and Sanjiv Khanna was pronouncing its judgment on the application of the CBI for...

Supreme Court on Friday vacated the interim protection from arrest granted to Kolkata Police Chief Rajeev Kumar in connection with the Saradha Chit Fund scam. However the Court has given him 7 days' time to approach appropriate forum.

The bench of Chief Justice of India Ranjan Gogoi with Justices Deepak Gupta and Sanjiv Khanna was pronouncing its judgment on the application of the CBI for arrest and custodial interrogation of erstwhile Kolkata Police Chief Rajeev Kumar in connection with the Saradha Chit Fund scam.

In April, The CBI had sought for the court to vacate its order restraining any coercive action against Kumar and to grant permission for "custodial interrogation". Accusing him of being non-cooperative, The federal probe agency had advanced that Kumar had to be interrogated to "unravel" the larger plot and the "money trail" in the scam. Kumar had filed an affidavit contending that the CBI is "targeting" him as part of a "larger conspiracy" by two BJP leaders.

In the wake of the face-off between the central agency and the West Bengal government on February 3, The former had prayed for the surrender of evidence and contempt against the state police. The Court had then directed Kumar "to appear and make himself available before the CBI and to faithfully cooperate at all times" in connection with the investigations into the Chit Fund scam. The bench had also issued notice to the Chief Secretary of the state of West Bengal, the DGP and the Police Commissioner on CBI's contempt plea, requiring the officials to file their responses.

On February 27, Not convinced to act on the contempt petition, The Court had required the probe agency to file an affidavit furnishing substantive material to back its claims of tampering of evidence by the state police.

Later, perusing the CBI's latest status report, the top court was of the view that "very, very serious" revelations have been come to light upon Kumar's interrogation.

Appearing for the CBI, Solicitor General Tushar Mehta had advanced before a bench headed by Chief Justice Ranjan Gogoi, "Your Lordships had ordered for the local police to cooperate with the CBI. I have narrated three incidents which show deliberate and wilful non-compliane"

"Three accused in the Saradha Chit Fund scam were arrested in Jammu & Kashmir and a laptop and mobile phones were recovered from them. However, these devices were not deemed necessary to be sent to the FSL (Forensic Science Laboratory) and were instead returned! They would have shown the involvement of some political leaders and other important personalities but the police conceded before the court that they be returned. Now there was no data as to who called who. So Material evidence was destroyed...The local police went to the (mobile) service providers for the Call Detail Records (CDRs). Then the investigation came to be transferred to the CBI. The minimum cooperation is to hand over the entire evidence, but the original mobiles and laptop were returned to the accused and look at what we have received of the data procured from the service providers...As per a notification of the government of West Bengal (Respondent 3 Kumar) was incharge of the day-to-day functioning of the state's SIT, but in our investigation, no answers were given to us...", he continued.

"I can have no complaints if there is a judicial order of the court (for release of the mobiles). But the Concession of the police was recorded! You track the accused and get their mobiles and laptops, the minimum you do is send them to the FSL! You are party to the destruction of material evidence!", said the SG.

"They were not telling even before Your Lordships what they had received from Airtel and Vodafone. So we moved an application for these service providers to give us all this. While we received everything on our own, the police handed over only a part of it!", he argued.

"The CDRs of three numbers were provided by the service providers for the period from February, 2012 to February, 2013. But the Bidhannagar police station (Kumar was the Bidhannagar Police Commissioner then) forwarded us CDR for only a limited period, that too in June, 2018 (four years after the CBI was entrusted investigation) after repeated requests...they get data for one full year from the mobile companies and we get 2 months 15 days' (worth CDR) for two numbers and for the third, of 2 months 90 days...and (Kumar) is not answering to us in the investigation. He is saying I was at the top, my staff may or may not have given. Unless there is custodial interrogation, we can't find out"

"Further, the Bidhannagar police station did not share the CDRs for 6 additional numbers. Vodafone now says that that data was given by them to West Bengal. Besides, Vodafone shows that the records were sought for a period shorter than one year for these 6 numbers. Why were the CDRs for only 6 months demanded? Why did they not Ask for atleast one year and ignore the irrelevant portions?"

Continuing, the SG submitted that the Prime accused in the scam, a lady, in a written statement given to the ED has stated that the cash transactions were maintained in certain cashbooks and diaries and that the police had seized the same- "But the seizure memo does not disclose that these documents were taken on record by the Bidhannagar police station! It is not known whether they were not seized or whether seized and not given to the CBI...Black money was being passed between the high and mighty! So why were these documents not seized? And if they were seized, why were they not shared?!"

"Kumar says (during the interrogation) that he is not aware of anything and that it is the job of the IO (Investigating Officer)", said Mr. Mehta.

When Chief Justice Gogoi wanted to know if the IO was asked, the SG said, "No fruitful information was received. One of the IO informed us that they got instructions from so and so who in turn got orders from Rajeev Kumar. We didn't go to him directly, we first went to the Joint Commissioner..."

Then the bench asked if the CBI has interrogated Arnab Ghosh, another SIT official and the DC DD of the Bidhannagar Commissionerate.

"The normal human conduct should for one police agency to cooperate with another police agency. The question to be asked is that what was at the residence of the Police Commissioner that needed him to take the unprecedented step of attacking another police agency? I will show his averments and the photos taken by an independent agency!", he continued.

"Why did you go to his house?", the Chief Justice wanted to know. "Search. Interrogation...why did the local police ambush the CBI?! We were pushed in to West Bengal vehicles! What was being hidden? What prompted the dharna where the police joined the CM? And then they said before Your Lordships that they had not sat on dharna but that place had became the impromptu Secretariat?!", pressed the SG.

"Why did you not obtain a search warrant?", probed the CJ. "We could have done that...but we are not on that...we went only for questioning", said the SG.

"How did he not cooperate with you so that your request for custodial interrogation is justified? If it is, We will allow you to arrest him...", reiterated the CJ.

"The status report filed by me shows that my pertinent questions were given evasive answers, or no answers or arrogant answers. He said these were matters of record, that he was a supernumerary officer not needed to know such details. He failed to disclose how the devices were returned to (Saradha group chief) Sudipto Sen and other accused, he shifted the blame on his subordinates or his superiors, he gave a cleanchit to all influential people that they never evaded investigation. He said oral orders were given to subordinates and that his reporting to his superiors was also oral, which is unbelievable!...Now other officers are also getting the same relief against arrest from the High Court which was granted to him under Your Lordships' order..."

Pointing out another bizarre fact, the SG indicated that "After the scam broke out, 6.21 crores was paid to Tara TV Employees' Welfare Association (owned by Sen) from the Chief Minister Relief Fund!"

"He (Kumar) is not an IO, he is At at best a member of the SIT. His was a Supervisory role. You need to give us material to show he is involved. Saying this on affidavit is not enough. Show us he was party to this, that the decisions were taken with his knowledge and his consent. Where is the affidavit saying (someone) acted on his instructions?", reflected the Chief Justice.

"Everybody said they got instructions from the top. The top is Arnab Ghosh and Ghosh said he got orders from Kumar...", the SG said.