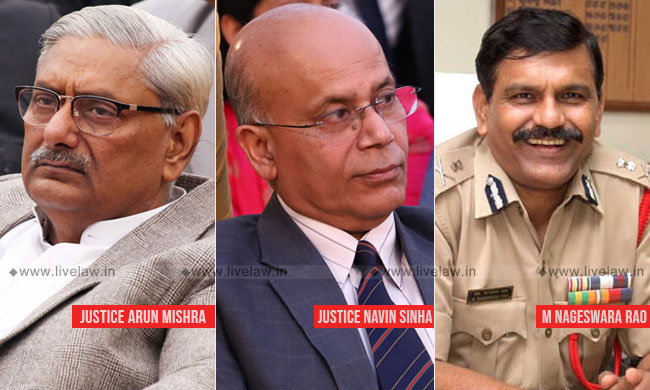 The Supreme Court bench of Justices Arun Mishra and Naveen Sinha today dismissed the petition filed by Common Cause and RTI Activist Anjali Bharadwaj questioning the appointment of M Nageswar Rao as interim director of the CBI.The bench said that no interference was called for as full time CBI director has already been appointed.The bench also refused to accept the petitioners' prayer...

The Supreme Court bench of Justices Arun Mishra and Naveen Sinha today dismissed the petition filed by Common Cause and RTI Activist Anjali Bharadwaj questioning the appointment of M Nageswar Rao as interim director of the CBI.

The bench said that no interference was called for as full time CBI director has already been appointed.The bench also refused to accept the petitioners' prayer for directions to bring in more transparency in the appointment process.

Before reaching the bench headed by Justice Arun Mishra, the case traversed a dramatic journey with three judges, including CJI Gogoi, recusing from hearing it.

CJI Gogoi recused on January 21 stating that he will be a part of High Powered Committee which was meant to select the neew CBI Director. The matter was next assigned to the bench headed by Justice A K Sikri, who recused on January 24 citing that he had taken part in the Committtee meeting, which had removed Alok Verma as CBI Director, leading to the appointment of Nageswar Rao as interim chief.

The case was then assigned to the next senior judge, Justice N V Ramana, who also recused on January 31, saying that he has previously attended Nageshwar Rao's daughter's wedding and that he is also acquainted with his son-in-law.

After that Rishi Kumar Shukla was appointed CBI Director by the High Powered Committee on February 2.

The matter was thereafter heard by the bench headed by Justice Arun Mishra.

However, this earlier arrangement i.e. Order dated October 23, 2018 making him interim CBI Director, had been quashed by the Supreme Court on January 8 in the Alok Verma case. However, the government still invoked its earlier order which had been quashed, to once again make Nageshwar Rao Interim Director of the CBI, contended the petition. RTI activist Anjali Bhardwaj is a co-petitioner in the PIL, which also alleges that the Government was not following a transparent process in the appointment of CBI Director. As per the petitioners, the Government cannot give charge of CBI Director without the recommendations of high powered committee. So, the Government order giving him charge of CBI Director is illegal and against appointment procedure under Section 4A of DSPE Act, the petition states.