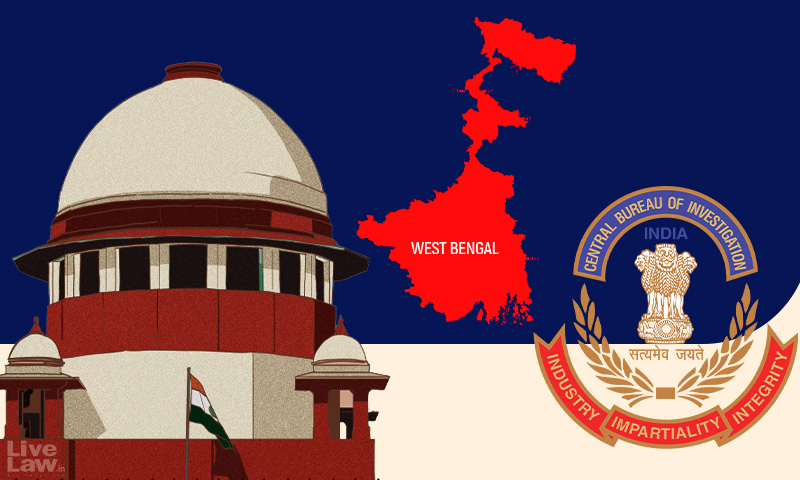 The Central Government has told the Supreme Court that State of West Bengal's claim that it has the competence to undertake a blanket withdrawal of all powers of investigation from the CBI is without substance. "That the power of the State Government to give consent for an investigation by the CBI, cannot and would not include a right of an omnibus power, to pass over-arching...

The Central Government has told the Supreme Court that State of West Bengal's claim that it has the competence to undertake a blanket withdrawal of all powers of investigation from the CBI is without substance.

The affidavit has been filed by the Centre in a suit filed by the West Bengal government under Article 131 of the Constitution of India, 1950 alleging that CBI is going ahead with registration of FIRs in relation to offences within the State,  despite the State withdrawing general consent accorded to CBI.

With regards to various reliefs that the State of West Bengal has sought for on the ground of withdrawal of consent u/s 6 of the DSPE Act, Centre has submitted that the consent which is referred to in Entry 80 of List I and Section 6 of the DSPE Act is limited to the offences under List II.

"The suit is filed by proceeding on the basis that the power to withhold consent is absolute. This certainly cannot be so for the reasons pointed out above. The result of this discussion is that the CBI is entitled to investigate all offences relatable to the entries in List 1, where laws made under those entries create offences. In addition thereto, it is always open to the Superior Courts to direct such permission in select cases where it is found that the State Police would not effectively conduct a fair and impartial investigation. As a result, each one of the FIRs would have to be scrutinized separately for tracing it to the law under which the FIR is registered and the Entry in Schedule 7 to which the law relates," affidavit further states on this aspect.

To further substantiate their contention, Centre in its affidavit has divided the 12 cases that were being investigated by the CBI into (i) cases involving acts of corruption under the Prevention of Corruption Act by public servants belonging to the Central Government, (ii) cases where the High Court has directed the CBI to investigate matters which have been held not to attract Section 6 of the DSPE Act, by reason of the judgment in State of West Bengal v. Committee for Protection of Democratic Rights (2010) 3 SCC 571 or Kazi Lhendup Dorji v. CBI (1994) Supp. (2) SCC 116 and (iii) cases where offences other than prevention of corruption act offences have been committed by the Central Government employees.

"The question is as to whether the State Government and its police could investigate offences arising under List I laws if committed within the territory of that State. If the State Government cannot do so with regard to these matters, surely, Entry 80 of List I of the DSPE Act would have to be read consistently with the other provisions of the Constitution. The consequence would otherwise be that a vacuum would exist under which there is no authority that could investigate those offences under the Central Acts. Hence the withdrawal of consent by the State Government would have no effect on the offences involved," the affidavit further states.

Contending that the only defendant in the suit is the Union of India represented by Secretary, Department of Personnel & Training and relying on the prayers sought in the suit, the Centre in its affidavit filed before the Top Court has submitted that each and every prayer in the present suit is directed either towards restraining the Union of India from investigating any case or towards quashing cases where the Union of India has allegedly registered FIRs.

Union in this regards has further submitted that it is the CBI which has registered FIRs and investigated cases but strangely the CBI has not been made a party to the suit.

"Being autonomous in regard to its functions in investigating FIRs and investigating cases, the CBI obviously is a necessary and essential party to the suit. However, in light of the fact that in terms of Article 131 of the Constitution of India, the dispute has to be between the Government of India and one or more States, or between States, the Plaintiff has used a device by which it excludes the real defendant and substitutes the Central Government, which has not done anyone of the Acts sought to be prevented by the prayers in the suit," the affidavit states.

Grounds On Which Dismissal Of Suit Has Been Sought

The Centre has contended that the State of West Bengal has suppressed many material facts in the suit.

Relying on Order XXVI Rule 9, 10, 11 and 12 of the Supreme Court Rules, 2013 and Seeking dismissal of suit on ground of non disclosure, Centre has submitted that,

"the filing of the plaint with suppression of facts and thereafter surreptitiously filing documents without giving any facts, details, significance and their impact on the prayers prayed for, is not only not maintainable but is a conduct disentitling the plaint to get any relief in the suit and the Application, therefore, deserves to be dismissed on the ground of non-disclosure of material facts and non- compliance of mandatory provisions contained in Order XXVI of Supreme Court Rules, 2013."