"The Inequalities of Technological Availability Have To Be Removed":CJI Bobde, At The Inauguration Of 'Nyay Kaushal' – Bombay HC's e-Resources Centre 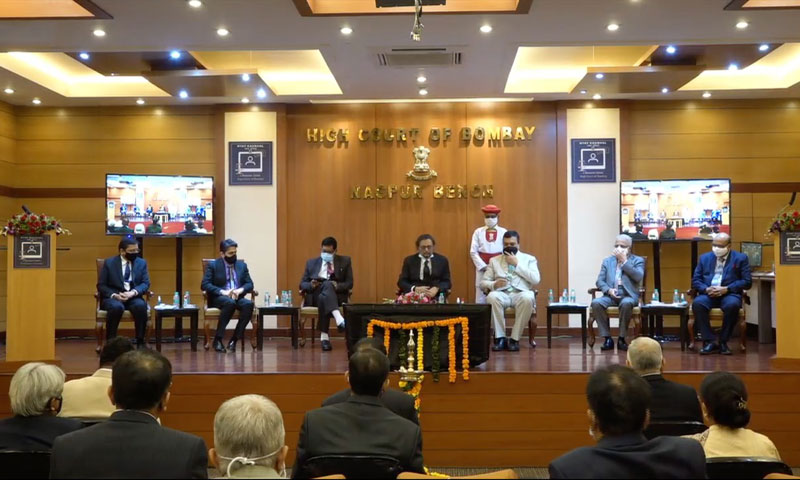 Citing the famous Latin maxim, and lauding the achievements of the courts around the country in "uninterrupted justice dispensation" despite the Covid-19 pandemic, Chief Justice of India Justice SA Bobde and Justice (Dr.) DY Chandrachud (Justice & Chairman, e-Courts Committee, Supreme Court of India) today inaugurated 'Nyay Kaushal' – the first ever e-Resources Centre of...

Citing the famous Latin maxim, and lauding the achievements of the courts around the country in "uninterrupted justice dispensation" despite the Covid-19 pandemic, Chief Justice of India Justice SA Bobde and Justice (Dr.) DY Chandrachud (Justice & Chairman, e-Courts Committee, Supreme Court of India) today inaugurated 'Nyay Kaushal' – the first ever e-Resources Centre of the country at Nagpur bench of Bombay High Court.

Nyay Kaushal is the first of its kind e-Resources Centre in the country, developed amid the Covid-19 pandemic to provide facilities of e-filing and video conferencing to courts across the country from the Centre itself. It has access to Supreme Court, the various High Courts, courts in talukas, as well as Family and Labour courts.

A "dedicated platform designed for the layman as well as technologically challenged litigant desirous of approaching the courts," the conceptualization of the entire project which has been completed within a month, was done by the e-Courts Committee of the Supreme Court, headed by Justice (Dr.) DY Chandrachud.

It was highlighted at the event that to reduce chances of an internet lock-jam, the Centre has been equipped with a high-speed internet facility of 300 MBPS.

Highlighting the conundrum that the present situation presented for the justice delivery system, CJI SA Bobde began his inaugural address with an anecdote, sharing, that in one of the hearings being conducted by the Supreme Court during the pandemic, an advocate had even referred to the Court as "Hon'ble Virtual Court" - however, it was not a "virtual court", the court was very much "real", only the hearing was virtual.

CJI Bobde stated that, "When the pandemic had begun, everything appeared to be dangerous. We tried to let the Supreme Court function in a restricted way, but one walk around the Court showed that it was not possible to have Supreme Court function safely in that manner." He said that, then, the judges went by the saying, "Let justice be done, though heavens may fall."

Offering his "congratulations and the highest praise to the courts, for ensuring that justice dispensation continued uninterrupted", he said that a challenge still existed before the courts due to the pandemic, because "though justice dispensation continued uninterrupted, access to justice was divided depending on technology-availability and access."

He said that, "The inequalities of technological availability have to be removed," and he would consider it a "failure" if justice did not "reach everybody."

"The inauguration of Nyay Kaushal", he said was a step in the direction to ensure technology-availability and access to justice for the common man despite dependence on technology, which was "here to stay."

Reflecting on the plight of junior advocates due to the pandemic, CJI Bobde said that, "An inequality at the Bar has also been unintentionally generated during this time. Junior lawyers have a grievance, that while earlier they could attend courts and get noticed, they have no such chance now. They are not being exposed to litigation because now, only the Senior (Advocates) can be seen on the screen," and hoped that though he was not aware of a way out of this situation, he was open to suggestions in this regard.

He said that, "The E-Resource Centre at Nagpur is meant to be a step at mitigating various inequalities - being connected to the Supreme Court, the High Courts and the Taluka courts."

He even hinted at extending video conferencing to Alternate Dispute Resolution proceedings, and urged for Mobile Vans for e-filing to be made available for ADR filings too.

He concluded by enumerating on the utility of Artificial Intelligence, in matters under the Motor Vehicles Act, which currently constitute 30% of pending litigation before the Supreme Court, routine work like issuance of summons under Negotiable Instruments Act which made up for 70% of the delay in these cases.

In an afterthought, he added that 54 cases have already been filed through the Nyay Kaushal facility.

Chairman for the e-Court Committee, Supreme Court of India, credited with spearheading the e-revolution in court processes on a war footing during the pandemic, Justice (Dr.) DY Chandrachud spoke at the event with a PowerPoint presentation on e-Courts' activities designed for the occasion.

He said that, "Delhi was the first to start virtual traffic courts across India with almost 27,00,000 challans received by the Virtual Courts, and Rs. 19.8 crores collected by the Government online."

Lauding the facilities at the e-courts, he said that nearly 202.35 crore transactions had been recorded from the e-courts' websites till now, and the total number of emails sent to advocates and litigants in 2020, were approximately 4.84 crore emails. The e-courts' mobile application, he said, records nearly 35 lakh hits daily and automated emails sent are nearly 3,50,000 daily. Further, 47,65,000 cases were registered by e-courts websites with e-filing facility available in 17 High Courts, 3 High Court benches and several district courts as of the present date.

He also announced the testing of the e-filing version 3.0 app, which includes features like the online filing of Vakalatnama, has ready-made templates of various routine applications, and in which, the advocates can add their partners, and associates as well.

Further, referring to the setting up of e-Sewa Kendras, he said, they have been started in 19 High Courts and 219 District Courts and Rs. 12.54 crores was released to High Courts for their setting up.