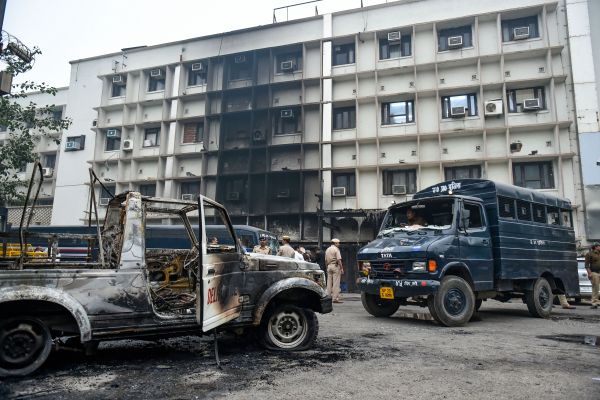 After a special sitting, the Delhi High Court on Sunday directed judicial enquiry into the clash between police and lawyers which took place in Tis Hazari court premises yesterday.The Court appointed former Delhi HC judge Justice SP Garg to head the probe. The judicial probe should be assisted by Director CBI and should be completed within 6 weeks.The Court has directed the Delhi...

After a special sitting, the Delhi High Court on Sunday directed judicial enquiry into the clash between police and lawyers which took place in Tis Hazari court premises yesterday.

The judicial probe should be assisted by Director CBI and should be completed within 6 weeks.

The Court has directed the Delhi Police Commissioner to record the statements of all injured advocates.

The bench comprising Chief Justice D N Patel and Justice C Hari Shankar further ordered that FIR should be lodged immediately and the copies of it shall be presented before the Court.

The Delhi Police Commissioner has been directed to immediately suspend the accused police officials. The Commissioner should complete internal inquiry against the erring officials and submit report to the Court within 6 weeks.

The Delhi Government has been directed to provide best medical treatment to injured advocates, if possible in AIIMS - especially to the seriously injured.  The Court also directed the Delhi Government to provide a lump sump ex gratia amount of 50,000 to Adv Vijay Verma (who suffered gun shot injuries), and of Rs 15,000 and 10,000 to other two injured advocates. Compensation over and above this amount has to be paid later, based on future needs.

The directions were passed by the bench in a suo moto case taken on the basis of an application by the Bar Council of India.

In the application moved before the court, the Bar Council of India has mentioned that till now no FIR has been lodged in the matter. The body has also submitted that Delhi police cannot be expected to conduct a fair and impartial investigation as some of its officials are themselves accused in the matter.

In light of the aforementioned submissions, BCI asked the court to issue the following directions:

The present matter pertains to a scuffle that had taken place between police officials and lawyers at Delhi's Tis Hazari Court, reportedly over a parking dispute within the court premises.

Taking suo moto cognizance of the BCI petition, the bench comprising Chief Justice D N Patel and Justice Hari Shanker at 1 PM on Sunday issued notice to the Centre, Government of NCT of Delhi, Delhi police and District Bar Associations and listed the matter for hearing at 3 PM.

During the hearing commenced at 3 PM, the Delhi police told the bench that 4 FIRs have been registered with respect to the incident. The counsel read out the names of the police officials involved in the scuffle. It was added that 14 motor cycles and some gypsy vans were burnt.

FSL has been conducted at the spot. SIT has been constituted under DCP, investigation stands transferred.  One ASI who was accused of taking the lawyer to the lockup has been suspended, submitted the counsel on behalf of Delhi police. Officers Harinder Singh and Sanjay Singh, who ordered the firing of guns and lathi charge have been transferred pending enquiry.

The bar association representative submitted that 6 police officers where beating one advocate, and after beating him they dragged him to the lockup.

Why didn't the fire gunshots in air, why were the advocates shot at, asked Advocate Mathur.

"Police is not even allowed to carry their fully loaded weapons to the court complex. Many protocols have been flouted. Many lady lawyers have complained that they were attacked. One advocate was dragged by 14 police officers to the lockup. It is captured in the CCTV footage. We have been attacked at our workplace. Lawyers chambers were attacked, they look like a ransack now. We demand an enquiry from at least a retired judge of the Delhi High Court. Suspected officials should be immediately suspended", submitted the bar association representative.

The Bar Council of India submitted that the police was dragging its feet on investigation as its own officials were involved. The policeman who fired at the lawyers has not faced any action till now; he has been simply transferred, submitted the BCI.

The President of the Supreme Court Bar Association termed the incident as an assault on judicial system.

"We want some other police to come to the court premises. We don't want to face Delhi Police", submitted the representative of Delhi HC Bar Association.

Yesterday, the Delhi HC Chief Justice had held a five hour long meeting with seven senior judges and officials on Delhi police on the issue.