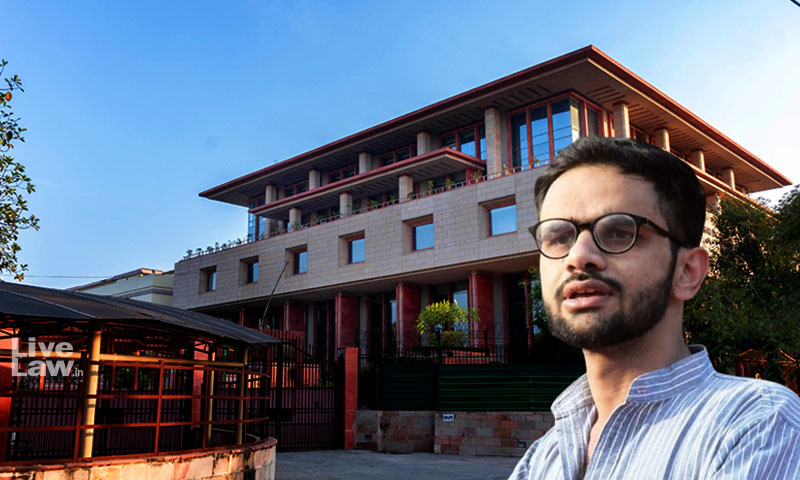 The Delhi High Court on Tuesday denied bail to student activist Umar Khalid in the larger conspiracy case of Northeast Delhi riots. Khalid has been in custody since September 2020.

A division bench of Justice Siddharth Mridul and Justice Rajnish Bhatnagar dismissed Khalid's appeal challenging the trial court order denying him bail in the case. The bench had reserved its decision on September 9.

"We don't find any merit in the bail appeal. The bail appeal is dismissed," said Justice Bhatnagar, while pronouncing the order.

Justice Mridul asked the court staff to upload the order "right away".

Khalid had moved High Court after he was denied bail by the Karkardooma Court on March 24. He was arrested on 13 September, 2020 and has been in custody for 765 days.

The FIR against Khalid invokes stringent provisions including Sections 13, 16, 17, 18 of the UAPA, Sections 25 and 27 of the Arms Act and Section 3 and 4 of the Prevention of Damage to Public Property Act,1984.

Khalid, a scholar and researcher, is an accused in the FIR 59 along with the Pinjra Tod members Devangana Kalita and Natasha Narwal; Jamia Millia Islamia student Asif Iqbal Tanha and student activist Gulfisha Fatima.

What is the case against Umar Khalid?

The prosecution has alleged that Umar Khalid had attended various meetings from December 2019 to February 2020 as part of a "conspiracy" to cause the riots.

As per the Delhi Police's chargesheet, Khalid was a member of WhatsApp groups like Delhi Protests Support Group (DPSG) and Muslim Students of JNU. While there is recurring mention of Khalid in relation to the alleged conspiracy in the chargesheet, the prosecution has particularly stressed upon his speech given at Amravati, Maharashtra on February 19, 2020.

Apart from alleging that the speech incited violence, the main thrust of the prosecution's reference to the speech is the specific mention of former US President Donald Trump's India visit by Khalid.

Khalid has also been accused of being mentioned in the "flurry of calls" that happened after the riots, adding that he was instrumental in creation of JCC (Jamia Coordination Committee).

While denying him bail, the trial court had observed that Khalid's presence throughout several WhatsApp groups during the period beginning from the passing of the Citizenship (Amendment) Bill in December 2019 till the February 2020 riots, had to be read in totality and not piecemeal. It was also observed that he had connectivity with many accused persons.

What did Umar Khalid argue before the High Court?

Senior counsel Pais, who represented Khalid in the bail proceedings, had argued that the Amravati speech was made in the context of protests against CAA, adding that harsh words used against the Government cannot amount to an offence under UAPA. Pais argued that the speech in question certainly was anti-CAA, against the government and its policies, however, he added, there was no call for violence or incitement.

He had also argued that using the word 'revolution' in the speech was not a crime and that by no stretch of imagination can it be said that the same was a call for violence. He had also highlighted the fact that there was no immediate violence after Khalid's speech.

Pais also called the FIR in question a "calculated FIR", contending that it was registered on March 6, 2020 whereas 751 FIRs were already registered within a few days - by end of February, by the Police after the violence erupted. He had argued that while initially only bailable offences were added by the Police in FIR 59, later non bailable offences including UAPA was added to ensure that the accused remain in jail.

Furthermore, Pais also highlighted the loopholes in witnesses' statements, including protected witnesses, to show that even if the same were taken at face value, they do not constitute crime.

According to Pais, 'terrorist act' as defined under Section 15 of UAPA was not made out in the matter. To buttress this argument, he had referred to a judgment of the Supreme Court wherein the word "terrorism" was discussed and it was held that Terrorism does not merely arise by causing disturbance of law and order or of public order.

It was also argued that mere membership of WhatsApp groups, as alleged by the prosecution, cannot make Khalid criminally liable when nothing objectionable was attributed to him.

What did Prosecution argue before the High Court?

The prosecution - Delhi Police's Special Cell, argued that to view Khalid's role in isolation in the case of conspiracy will be impermissible in law and that the "narratives" sought to be created by him cannot be looked into as his defence at the stage of bail.

SPP Prasad had submitted that various accused persons in the FIR had a 'common factor', essence of which was to create a sense of fear in the Muslim population of the country.

Prasad had specifically referred to the speeches made by Umar Khalid, Sharjeel Imam and Khalid Saifi to argue that they were all connected with each other at the relevant time as a part of conspiracy to commit 2020 riots.

Prasad also had called Umar Khalid's Amravati speech as a 'calculated speech' for the reason that it not only referred to CAA and NRC - the focal point of protests, but also other issues specifically relating to Muslim community.

It was also argued that misinformation was spread during the riots and that 24x7 sit in protest sites created and moved strategically to cause blockade of roads in the national capital. Furthermore, it was argued that the protests were followed by attacks on police personnel and paramilitary forces.

Prasad had also argued that there was spread of violence in non-Muslim areas, damage to public properties and use of petrol bombs and other elements, adding that also none of the protest sites were organic in nature.

Oral observations made by the Bench during the the hearings

While issuing notice in Umar Khalid's plea, the bench had observed that his Amravati speech was obnoxious, hateful, offensive and prima facie not acceptable.

He had further said: "Did Gandhiji ever employ this language? Did Shaheed Bhagat Singh ever employ such language? We have no qualms about permitting free speech but what are you saying?.... Does it not attract Section 153A or 153B of Indian Penal Code?"

Similarly, Justice Bhatnagar had also questioned the speech by asking Pais if it was proper to use the word 'jumla' in relation to the Prime Minister of India.

However, the bench had later observed that the speech may be in bad taste but that does not make it a terrorist act.

"…that the speech is in bad taste, does not make it a terrorist act. We understand that extremely well. If the case of the prosecution is premised on how offensive the speech was, that by itself won't constitute an offence. We will give them (prosecution) the opportunity," Justice Mridul had said.

The bench had also said that it cannot test the veracity of witness statements at the stage of bail under UAPA.

April 26: Umar Khalid's Bail Rightly Rejected By Trial Court, Narratives Sought To Be Created Can't Be Looked Into As Defence During Bail: Prosecution To High Court

April 27: Is It Proper To Use Word 'Jumla' Against PM? There Has To Be 'Lakshman Rekha' For Criticism : Delhi HC On Umar Khalid's Speech

April 29: SC's Verdict On Validity Of Sedition Law Will Have A Bearing: Delhi High Court Adjourns Bail Pleas Of Umar Khalid & Sharjeel Imam To May 6

May 20: [Delhi Riots] Using 'Revolution' Word In Amravati Speech Not A Crime, No Call For Violence: Umar Khalid Argues For Bail In Delhi High Court

May 23: Protestors In Anti-CAA Agitation Want To Be A Part Of India, Did Not Terrorize Or Threaten Sovereignty: Umar Khalid Argues For Bail In Delhi HC

May 24: [Delhi Riots] Umar Khalid In Prison Since 2 Yrs Merely On Basis Of A Hearsay Witness Statement Unrelated To Violence: Argument For Bail In High Court

May 30: "Speech In Bad Taste Does Not Make It A Terrorist Act": Delhi High Court On Umar Khalid's Amravati Speech In Bail Hearing

Aug 1: [Delhi Riots] Essence Of Speeches Made By Accused Persons Was To Create Sense Of Fear In Muslim Population: Prosecution Argues In High Court