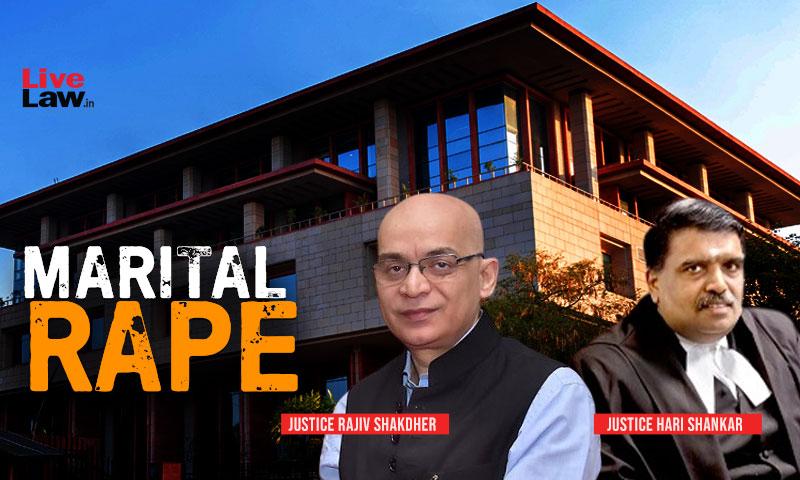 The Delhi High Court on Wednesday passed a split verdict on a batch of petitions challenging the exception to Section 375 of the Indian Penal Code, which exempts forceful sexual intercourse by a man with his own wife from the offence of rape.

Justice Rajiv Shakdher has held that the exemption to the husband from the offence of marital rape is unconstitutional. Exception 2 of 375, 376B IPC was therefore struck down by him as violative of Article 14.

"The impugned provisions in so far as they concern a husband having intercourse with his wife without consent are violative of Article 14 and are therefore struck down", Justice Shankdher held.

However, Justice C Hari Shankar said that he does not agree with Justice Shakdher. Justice Harisankar has held that Exception 2 to Section 375 does not violate Constitution and that the exception is based on an intelligible differentia.

A bench of Justice Rajiv Shakdher and Justice C Hari Shankar pronounced the judgment after reserving the orders on February 21. Both judges granted certificate to appeal to Supreme Court saying substantial questions of law are involved.

Detailed copy of the judgment is awaited.

The Court had appointed Senior Advocates Rebecca John and Rajshekhar Rao as amici curiae in the matter. Both of them argued in favour of striking down the exception.

While the Centre repeatedly requested the Court to defer the hearing saying that it is undertaking a consultative process to review the IPC provisions, the Bench refused to accept the request saying "there is no terminal date when the consultation process will get over" and proceeded to reserve judgment after hearing the parties.

He had submitted that while the Central Government reiterated it's stand that it was committed to maintain and protect the dignity and liberty of every woman, the question involved in the petitions was not merely a constitutional question relating to regular statutes but the same had far reaching consequences.

In an additional affidavit filed dated February 3, 2022, the Centre had submitted that marital rape issue needed a comprehensive approach wherein a consultation process is undertaken with all stake holders including all the State Governments, rather than taking a strict legal approach.

Centre had said that while it is committed towards protection of liberty, dignity and rights of every woman who is the fundamental foundation and a pillar of a civilized society, however, it has been said that the question involved in the petitions "may not be treated merely as a question concerning constitutional validity of a statutory provision as the subject matter has and will have very far reaching socio-legal implications in the country."

"In the most respectful submission of the Central Government, considering the social impact involved, the intimate family relations being the subject matter and this Hon'ble Court not having the privilege of having been fully familiarised with ground realities prevailing in different parts of Society of this large, populous and diverse country, taking a decision merely based upon the arguments of few lawyers may not serve the ends of justice."

"The Deponent, therefore, reiterates that the hearing be deferred providing for a stipulated time line within which the Central Government would conduct an effective consultative process after which it will be in a position to assist this Hon'ble Court."

What Did the Petitioners Argue?

Senior Advocate Colin Gonsalves appearing for one of the private individuals argued that marital rape is the biggest form of sexual violence against women which is never reported, analyzed or studied.

Other petitioners namely RIT Foundation and All India Democratic Women's Association (AIDWA) represented by Advocate Karuna Nundy had argued that the marital rape exception provided under sec. 375 of Indian Penal Code violates a woman's right to dignity, personal and sexual autonomy and her right to self expression enshrined under the Constitution of India.

On the aspect of marital rape exception being violative of Art. 14, it was submitted that the provision creates classification on the basis of marital status of the victims like unmarried women, live in or divorced partners, married women and married but separated women.

It was added that such a classification has no reasonable nexus with the object of the statute to criminalize rape which is to prevent and punish non consensual sexual intercourse.

It was also argued that non-criminalization of marital rape is a violation of married women's rights guaranteed under Article 21 of the Constitution.

Advocate RK Kapoor representing NGO Hridey had made rejoinder submissions opposing the criminalisation of marital rape by submitting that forcible sexual intercourse between a husband and his wife in a marital relationship cannot be labelled as rape and at worst, can only be called a sexual abuse. He said that the said fact would be clear from the definition of cruelty as defined under the Domestic Violence Act 2005.

Furthermore, Kapoor had also argued that a wife cannot compel the Parliament to prescribe a particular punishment against the Husband to satisfy her ego, while seeking to criminalize the act of marital rape.

Advocate J Sai Deepak representing Men Welfare Trust argued that the fact that the petitioners have challenged exception 2 of Section 375, Section 376B of IPC and Section198B of CrPC, shows that they were aware of the existence of specific and special treatment in the legislation, the basis of which is the existence of marriage.

He added that when the Code creates an ecosystem based on certain provisions, both under the IPC and Domestic Violence Act, it is proof of the existence of a very specific logic and rationale. The exception can't be held to be "manifestly arbitrary" or "capricious" so to invalidate it on the ground of violation of Article 14.

It was submitted that the legislature and Government have to power to undertake social experiments which cannot be interfered with by Courts on the grounds of unconstitutionality.

Senior Advocate Rajshekhar Rao, appearing as amicus curiae in the matter that a rape is a rape and that no amount of classification or 'legal jugglery' can alter that reality.

Rao said so while arguing that in a situation where the man is not the husband, the woman would be able to prosecute him for rape. However, such a woman is denied the ability to call it a rape if that man was her husband.

Rao primarily argued on the aspect of the constitutionality of the exception in as much as the tests prescribed under Article 14 and 21 of the Constitution of India are concerned. He argued that the act of non-consensual sexual intercourse or rape is abhorrent and inherently violative of the basic right to life and liberty of a woman under Article 21 .

Rao further argued that such an act is an offence not just against the victim but the society at large and the same violates a woman's right to equality, dignity, bodily integrity, personal and sexual autonomy, bodily and decisional privacy, and reproductive choices. He submitted that the exception decriminalizes such non-consensual intercourse by a husband upon his wife and is, therefore, unconstitutional.

Rao had argued that classification of right to prosecute a man on the basis of relationship/ marriage is unreasonable and offends Article 14 of the Constitution.

She had also argued that expectation of sexual relations in a marriage cannot lead to a husband having forcible sex with his wife.

Adding that both the parties in a marriage may have expectations of conjugal relations, however, John argued that such expectation cannot result in the husband having forcible sex with wife.

John also submitted that availability of other provisions in various legislations including Sections 498A, 304B of IPC, Domestic Violence Act and other civil remedies, are insufficient to deal with the offence of rape under sec. 375, as regards to a wife alleging rape by her husband.

Adding that there is no express commonality between the said provisions and Section 375 of IPC, she argued that while certain elements of the base offence may exist, however, every offence must be separately prosecuted.

What did the Delhi Government argue?

Delhi Government had submitted that the exception to Section 375 of IPC pertaining to non-criminalization of marital rape does not leave a married woman remediless pursuant to forced sexual intercourse by her husband.

Advocate Nandita Rao had submitted that the exception does not compel a wife to have sexual intercourse with the husband and that the remedy of divorce, including other remedies under the criminal law, is available to her in such situations.

Leave It To Trial Courts To Decide How Marital Rape Is Proved : Colin Gonsalves To Delhi High Court