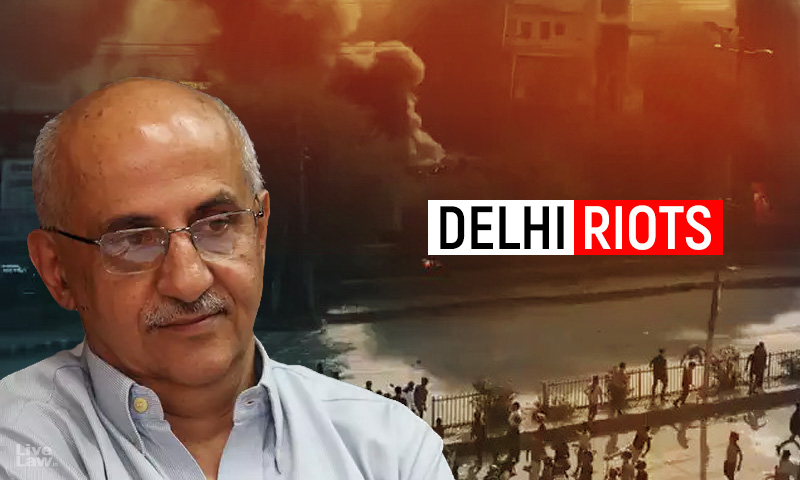 The Delhi High Court on Monday allowed social activist Harsh Mander to withdraw his writ petition which sought registration of FIR against politicians such as Kapil Mishra, Anurag Thakur, Parvesh Verma etc., over alleged incitement of Delhi riots.This was after Senior Advocate Kapil Sibal, who appeared for Mander, expressed that he was seeking to approach the jurisdictional Magistrate...

This was after Senior Advocate Kapil Sibal, who appeared for Mander, expressed that he was seeking to approach the jurisdictional Magistrate under Section 156(3) of Code of Criminal Procedure for the same relief.

Based on the submission, a division bench comprising Chief Justice D N Patel and Justice Prateek Jalan allowed the withdrawal of the petition, with liberty to avail alternative remedies.

The Court also adjourned the hearing on the other petitions in the batch till next Monday, after directing the Delhi police to streamline their replies to various pleas.

During the hearing, one of the petitioner, Jamiat Ulema Hind, invited the Court's attention to the fact-finding report filed by Delhi Minorities Commission, which stated that several places of residence and worship belonging to Muslims were destroyed in the riots.

There was a targeted attack on a particular community, Jamiat said. It alleged that the Delhi police were "mere bystanders to the attacks committed on members of the Muslim community ".

However, the police refused to register FIR when members of Muslim community approached them; instead, the police made several Muslims accused in the case, Jamiat added. It also submitted that nine out of ten accused persons in the case related to riots are Muslims, though most of the riot victims were Muslims.

"40 out of the 53 people who died are Muslims", Jamiat submitted.

Jamiat: Muslims went to register the FIR but they were not entertained by the police

The Court also heard Advocate Ajay Guatam, who appeared in a petition seeking FIR against several leaders of AAP and Congress over Delhi riots. The counsel submitted that an NIA investigation was needed into the 'anti-India' protests against the Citizenship Amendment Act.

"These protestors were threatening to kill the Prime Minister and the Home Minster in order to seek 'azadi'. They were protesting because they faced defeat in Ram Mandir case", Gautam submitted.

But the bench said that the police are already investigating the case, and asked the counsel to refrain from making "political statements".

Additional Solicitor General, Pinky Anand, submitted that the writ jurisdiction under Article 226 cannot be used to seek registration of FIR.

The Delhi police has filed an affidavit in the matter stating that it has not so far found any evidence against politicians such as Anurag Thakur, Kapil Mishra, Parversh Verma etc, to link them to riots.

On February 26, a bench headed by Justice Dr. S Muralidhar, while hearing the petition filed by Harsh Mander, had played the videos containing the alleged inflammatory speeches of Kapil Mishra for the viewing of police officers.

The bench later directed Delhi police to take a decision within a day on the complaint of Mander seeking registration of FIRs against the leaders for alleged provocative speeches.

Next day, the Solicitor General told a different bench comprising Chief Justice D N Patel and Justice C Harishankar, which was considering the petition, that the Delhi police has decided to defer the decision on FIR as the riots situation was not "conducive" for registration of the same. Accepting the submission of SG, the bench adjourned the hearing till April 13.

Harsh Mander later approached the Supreme Court contending that the Delhi HC committed injustice by granting a long adjournment to his matter.

The Supreme Court advanced the hearing in the Delhi HC, observing that the "long adjournment was unjustified".