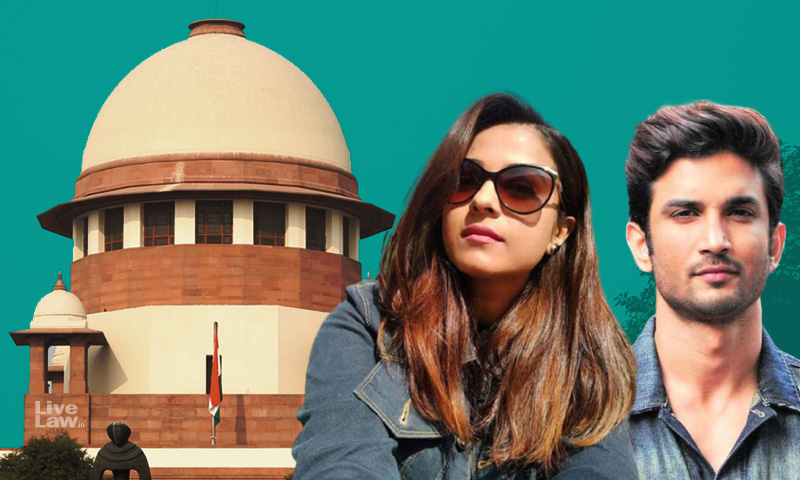 The Supreme Court on Monday granted liberty to the Petitioner in a plea seeking a CBI probe monitored by top court into the death of Disha Salian, former manager of Late Actor Sushant Singh Rajput to approach the Bombay High Court instead.A bench of Chief Justice SA Bobde, AS Bopanna & V. Ramasubramaniun stated that the Bombay High Court would be an appropriate forum to approach in terms...

The Supreme Court on Monday granted liberty to the Petitioner in a plea seeking a CBI probe monitored by top court into the death of Disha Salian, former manager of Late Actor Sushant Singh Rajput to approach the Bombay High Court instead.

A bench of Chief Justice SA Bobde, AS Bopanna & V. Ramasubramaniun stated that the Bombay High Court would be an appropriate forum to approach in terms of the averments sought in the plea.

"In a criminal case connected to this issue (Sushant Singh Rajput Death Case), your lordship has directed a CBI inquiry," said the Counsel for the petitioner when the matter came up for hearing.

At this juncture, CJI Bobde told the Counsel to approach Bombay HC. "You might be having a case, but what is the problem in approaching the Bombay HC? They know all officers and they have evidences. Come here if you have a problem.", he remarked.

In this backdrop, the petitioner withdrew the petition whereby the top Court granted him liberty to approach the Bombay High Court

On the last two occasions, no counsel had appeared in the instant PIL as a result of which CJI Bobde had posted the matter for hearing to today.

He had then remarked, "Tell Mr. Dhanda in the meanwhile to consider going to the Bombay HC Instead".

Filed by Puneet Kaur Dhanda, through Advocate Dr Sushil Balwada, the PIL has urged the Court to seek records pertaining to investigation from Mumbai Police into the alleged suicide of Disha Salian.

Dhanda has stated that when the Bihar Police sought to investigate the Disha Salian angle in the Sushant Singh Rajput case, Mumbai Police had allegedly told the former that the case records pertaining to Salian were deleted by mistake.

Further to this, when the Bihar Police sought to help, Mumbai Police did not give access to the laptop in which files related to Salian's investigation was stored. The petitioner has also drawn a nexus and link between the deaths of both Salian and Rajput while citing a news Article dated August 3.

".....news article clearly revealed the involvement of many celebrities in the death of Disha Salian and Mr Sushant Singh Rajput," the plea reads.

In this context, it is alleged that according to the report, "a star kid (who himself has done two movies) called Sushant's ex-manager Ms Disha Salian to his penthouse for partying. Present in the party were few political personalities as well as some celebrities".

Alleging that the Salian was raped and molested at the party, the report has stated that immediately after the party Disha died under mysterious circumstances.

The plea avers that after the party, Salian had called up Sushant Singh Rajput and had informed him about the rape. Rajput, after learning this, allegedly told his friends Sandeep Singh and Rhea Chakraborty everything. It was after learning that Sushant knew of what happened with Disha, the report suggests that Sandeep Singh informed and alerted the people involved in Salian's case.

"Since that day Mr Sushant Singh Rajput was getting death threats and he was also threatened of dire consequences if he opens his mouth to the cops or media. Sushant changed his SIM card 50 times between 9th June to 13th June. He was really scared for his life and would even sleep in his car out of fear."

The plea states that both Rajput and Salian died under suspicious circumstances and at the "peak of their successful professional career and as per the statements of witnesses they both were upset as some projects of them were sabotaged and taken back from them and some of the projects were not working out and many were getting cancelled or delayed."

Disha Salian died on June 8 after falling off the 14th floor of a residential building (Regent Galaxy) in Malad (West) Mumbai.

At the time of the incident, Salian was with her fiancé Rohan Rai.