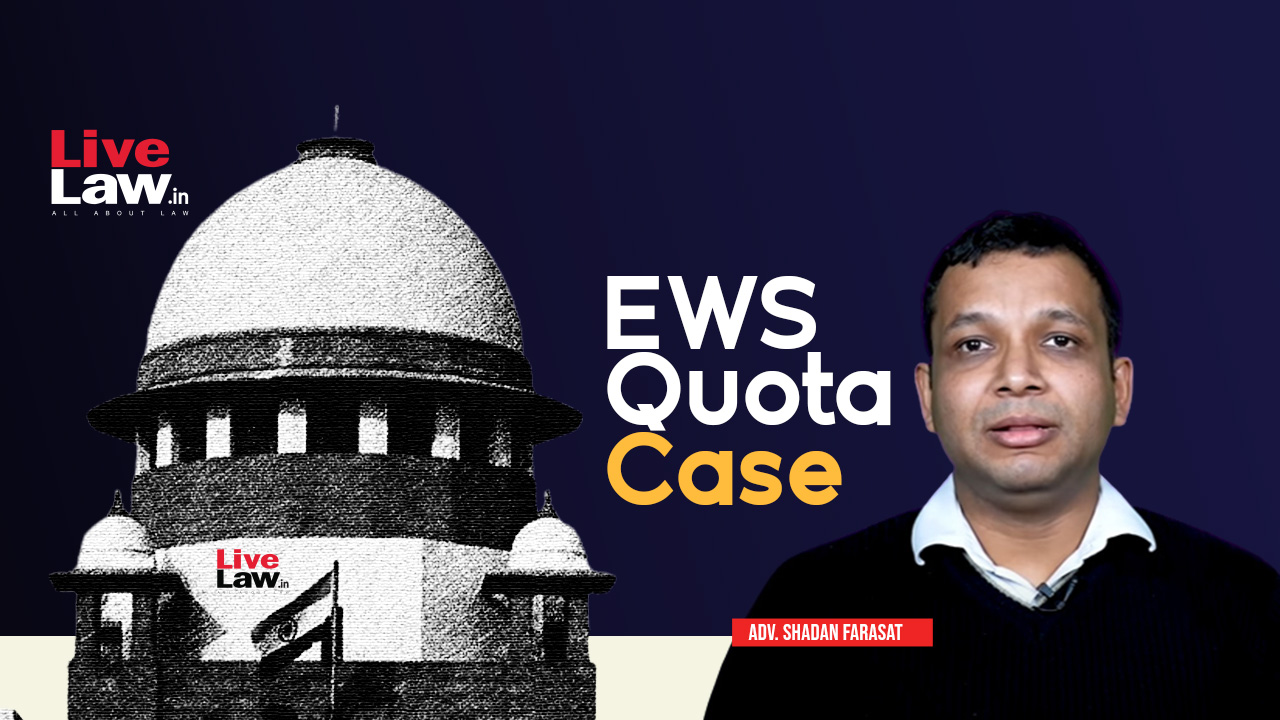 Adv. Farasat commenced his submissions by stating that originally, reservations were granted solely on an "anti-discrimination basis", and not on an "anti-depravation basis". He stated that this was the basic structure, which was being violated by the new amendment which granted reservations on the basis on depravation. He took his arguments one step further and stated that even if it were to be assumed that reservations could be an anti-depravation measure, exclusion of backward classes, when they were in fact poorer than the forward class poor, was a direct violation of the equality code. He elaborated on this point and said–

"For example I'm from Bihar, I live in an apartment. My guard comes and tells me that I'm an Upper caste in Bihar and I've never faced discrimination there. But here, I only earn Rs. 16,000 and it is difficult to manage it for a family of four. I take the best case scenario and assume that the 103rd amendment is for such people. Even then, the exclusion of backward class violates equality code. Taking this example only, the guard's annual income translates to Rs. 2 Lakh. The criteria for EWS reservations is 8 Lakh. So, an upper caste earning 2 Lakhs is being given benefits. But a more deprived lower caste person is not getting these benefits. In addition to being more deprived, they are also a constitutionally recognised discriminated category...In the three concentric circles, the heart is SCs and STs. What this amendment does is excludes the heart of it. That violates equality."

However, the bench interjected and highlighted that those belonging to the backward classes already had protections and reservations guaranteed to them. CJI Lalit remarked–

"The idea with which this amendment is introduced, I think, is that because there is already a protective umbrella given to backward classes, giving them some kind of protection...that is why they are excluded."

To this, Adv. Farasat responded –

"The quota for backward classes is for a separate purpose. It is a quota for a group, not individual, to correct historical wrongs, to ensure representation. It doesn't speak to an individual. It speaks to the group. So my position, it's completely agnostic too. If I'm SC or an ST–what I am, it doesn't matter, I will get protection. This quota is a different animal, it speaks to the individual on the economic condition of that individual. Therefore, to say that- 'you had that quota, I'll deny you this'- will not be permissible because they serve two different purposes and address two different constituencies."

He highlighted that the purpose of both quotas as well as the entities the said quotas were meant for, were both different and thus, inclusion in one quota could not mean exclusion from another.

Justice Bhat then posed another question and asked–

"Keeping aside the argument of exclusion, after 75 years, we still see generations of poverty. We see BPL, there are a large mass of people falling within that. Why can't there be economic based affirmative action? Even if it is 20%, it's a large mass of people. There will still be a non-discriminated group who are unable to access many things. In theory, government schools are available, jobs are available, but these people are as disadvantaged as others. So per se what's so wrong if they don't belong to a homogeneous group?"

Here, Adv. Farasat submitted that there were other affirmative actions which could be taken to address the problems faced by economically disadvantaged groups, which did not require providing them with reservations. He stated that the idea of reservation was to provide reparations to historically disadvantaged groups for the oppression they had faced. Referring to certain data submitted to the bench, he stated–

"This shows intersectionality between wealth, inequality and caste. I say address these forward classes, but the largest chunk where the poverty is massive and deeper, how can that be excluded and the equality quote not be thrashed completely?"

While quoting data from the Indian Human Development Survey and the Sinoh Commission Report, he submitted–

"In 2005, average income of poor SC was 76% of poor Brahmins and 56% of poor upper caste. In 2012, it was 73%. Thus poor Brahmins earn more...I'm not saying that Upper caste poor are not supposed to be beneficiaries. But by their own perception, they didn't see themselves as poor but SCs did. Poverty is linked with caste status and your own self perception...All backward classes have a higher number in BPL list. Out of 31.70 crore BPL families, this amendment seeks to address only 5.8 crore."

"So are Art 15(1) and 16(1) part of basic structure? Are you saying that the idea that there cannot be discrimination is basic structure and the only exception is affirmative action? Which means you'll only advance those parts who have been unrepresented."

When Justice Bhat remarked that not excluding SEBCs from EWS would require them to remove 50% as a ceiling limit for reservations, Adv. Farasat submitted–

"On that, I think, personally, 50% is not a rule part of basic structure. It can be exceeded, till the time it advances substantive equality."

Adv Farasat's second submission was that the text of 15(6) and 16(6) had two possible constructions, one which could exclude backward classes and another which could include backward classes. He urged that the court had to accept the construction which included backward classes within the ambit of the Articles. Furthering this submission, he drew the attention of the court to the text of the Articles, which stated that the reservations on basis of economic criteria would be "in addition to the existing reservations and subject to a maximum of ten per cent of the total seats in each category." While highlighting this phrase he stated that "in addition" here meant "other than". Thus, as per Adv Farasat, backward classes were not excluded from EWS reservations under Article 15(6) and 16(6). Elaborating upon the same, he said–

Quoting this judgement, he said–

"In the light of the contemporary issues, the purposive method has gained importance over the literal approach and the constitutional courts, with the vision to realise the true and ultimate purpose of the Constitution not only in letter but also in spirit and armed with the tools of ingenuity and creativity, must not shy away from performing this foremost duty to achieve constitutional functionalism by adopting a pragmatic approach. It is, in a way, exposition of judicial sensibility to the functionalism of the Constitution which we call constitutional pragmatism. The spirit and conscience of the Constitution should not be lost in grammar and the popular will of the people which has its legitimacy in a democratic set-up cannot be allowed to lose its purpose in simple semantics."

"If we accept your argument, maximum mass of the people who would be eligible for EWS would be SC/ST/OBCs. This extra 10% goes to reserved categories only. Is that the purpose?"

To this, Adv. Farasat, stated–

Sr. Adv. Gopal Sankaranarayanan, appearing for 'Youth for Equality' an independent group primarily against caste based reservations commenced his arguments by stating that EWS Quota was not an alien concept and had been employed before in cases of 'Right to Education' etc. As such, he stated that EWS reservations should not be frowned down upon.

The gist of his submissions was that the 103rd amendment violated the 50% ceiling limit and as such EWS Reservations should be evolved to confine themselves within the 50% ceiling limit. He submitted that the words "in addition to the existing reservations" under Article 15(6), breached the basic structure of the Indian Constitution and needed to be severed. He added–

"My first caveat is that this gives the existing reservations a permanent foothold which was not the intention of the constitution. The minute Constitution says 'in addition to existing reservations', you are cementing the reservations existing through Constitution. So far in these amendments, the power has been exercised in a manner where they say that you can have protection but in addition to this 10%. When Maximum quantum is given, it is mentioned not because of data analysis but because the constitution recognises that there will be a ceiling limit."

He then submitted that the judgement of Indira Sawhney v. Union of India was no longer relevant because it had been "undone" by a constitutional amendment. He stated–

"In my view, Indira Sawhney judgement is no longer relevant because once a constitutional amendment undoes the judgement, we go forward from there. There have been two or three attempts to undo Indira Sawhney...My arguments will be on- one, establishing that 50% ceiling limit is a part of basic structure. For this, I'll rely largely on Nagaraj. If 130 judges of this court though 75 years have cemented something down, in no uncertain terms, in a singular voice, perhaps that has reason which is to be understood as an essence at the heart of Equality code. Everything has to be accommodated in that 50%. This amendment does not give leeway to State to remove reservations...The idea is that 50% cannot be crossed and that's a basic feature norm."

With this, Sr. Adv. Gopal Sankaranarayanan concluded his arguments for the day, which he will continue in the next hearing