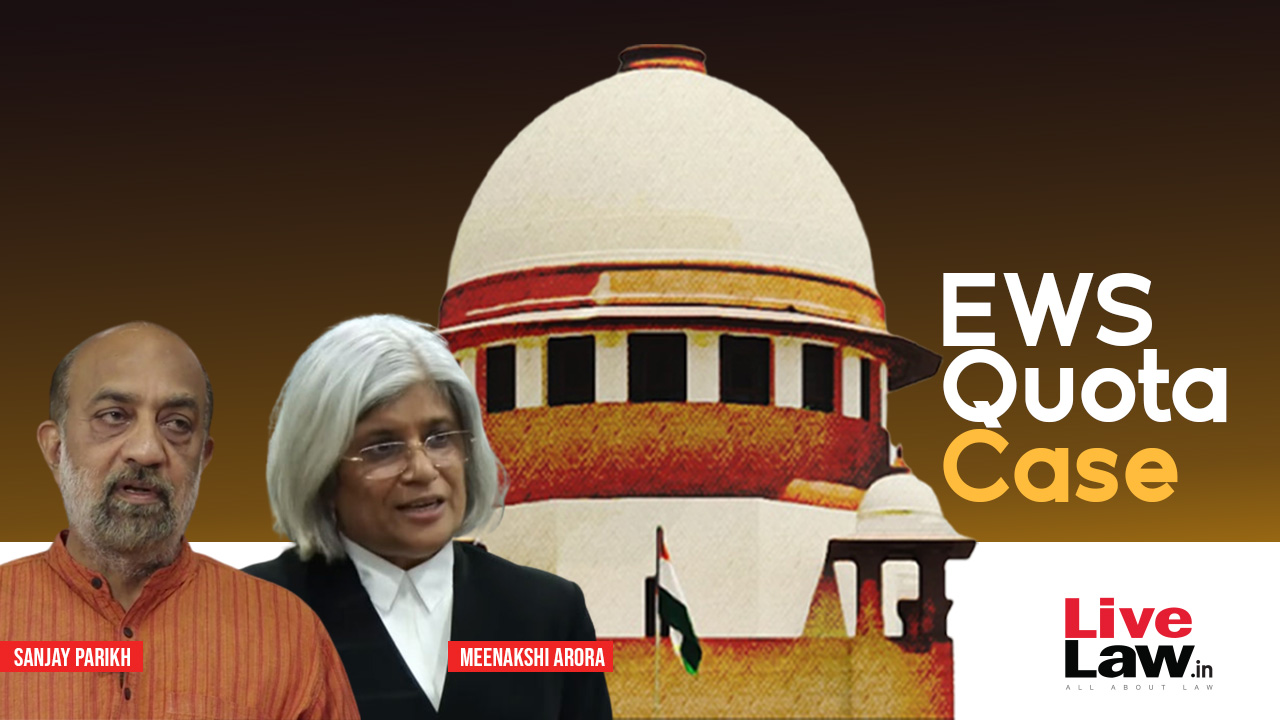 The Supreme Court Constitution Bench, on Tuesday, commenced the hearing on the cases challenging the constitutional validity of reservation for Economically Weaker Sections. In the last hearing, the 5-judge bench comprising Chief Justice of India UU Lalit, Justices Dinesh Maheshwari, S Ravindra Bhat, Bela M Trivedi and JB Pardiwala had proposed to complete the hearing on the matter in...

The Supreme Court Constitution Bench, on Tuesday, commenced the hearing on the cases challenging the constitutional validity of reservation for Economically Weaker Sections. In the last hearing, the 5-judge bench comprising Chief Justice of India UU Lalit, Justices Dinesh Maheshwari, S Ravindra Bhat, Bela M Trivedi and JB Pardiwala had proposed to complete the hearing on the matter in five working days, and start the same from today, that is, September 13, 2022. Today's hearings were commenced by acclaimed academician, Dr. Mohan Gopal who submitted that the EWS quota inverted the concept of reservation as a tool of representation for the disadvantaged groups and converted it into a scheme for financial upliftment. A detailed report on his arguments can be found here.

Equality Code and Determination of Reservations

She stated that class disadvantage owed its origin to structural inequality and thus, backwardness became an integral part of any form of reservation. She said–

"It was designed as a qualifying phrase to ensure that the exception does not eat the rule. Reservations that ignore the issue of backwardness, or are based only on a single criterion such as caste, or income have been struck down. Reservations based on only one caste were struck down in the Balaji judgement (Balaji v. State of Mysore) and reservations only on income was struck down by Indira Sawhney judgement (Indira Sawhney v Union of India)."

In this context, she provided an illustration of the creamy layer doctrine. She said–

"This court said that creamy layer is for those who belong to backward categories but are no longer backward as they've overcome a threshold. The court even denied reservation when a forward category married a backward class...This judgement is B.V. Giri...The court is extremely zealous to the extent that marrying into a backward class doesn't make you backward and even if on your volition you become Kshatriya, you don't cease to be a tribal."

She submitted that backwardness was required to be determined on multiple factors by committees which were constituted under Article 340 of Constitution. She described this as one of the "guardrails" to determine backwardness. Other such guardrails as per Sr. Adv. Arora were that backward classes had limited representation, which required reservations to undo historical injustice; reservations could not exceed more than 50% of seats as held in the judgement of Balaji v. State of Mysore and; reservations must balance "efficiency of administration" with social justice. She stated–

"Reservations are class based remedies to counteract historic injustice and provide reparations for classes who have been out of the power structure with a view to increase their representation and to uplift them to the standard of other forward classes. They are "class based" as against a section. Economically weaker "Sections"- that is the amendment. Reservations on basis of Economically Weaker Sections is individualistic. Reservations are not poverty alleviation programs as has being held in Indira Sawhney judgement."

Sr. Adv. Arora highlighted the difference between 'backward classes' within the meaning of Article 16(4) and Article 46 and stated that while the purpose of 16(4) was limited to a particular class of people and not individuals from weaker sections; the concept of weaker sections under Article 46 had no such limitations.

Violation of the Basic Structure of Constitution

While continuing her arguments, Sr. Adv. Arora stated that the core of her arguments was that reservations under Article 15 and 16 of the Constitution were not aimed at providing economic aid but because backwardness caused to such sections was both the cause and consequence of "non representation in the country." She submitted that mere economic or educational backwardness could not be the criteria of backwardness under Article 16(4). While talking about the consequence of such reservations, she stated–

"(In EWS reservations) there are no safeguard features, no guard rails, not even an end point. For instance, under Article 16, there is an end point, that reservations are to be granted till the class is adequately represented in the services under the State. EWS has no end point and no safeguards, unlike existing reservations."

She stated that there was no logical end point of EWS reservation as there would always be people poorer than others. She further submitted that EWS Reservation explicitly excluded disadvantaged socially and educationally backward classes and violated basic structure. She stated–

"To pretend that EWS and the backward classes both need reservation is akin to Anatole France's observation–The poor have to labour in the face of the majestic equality of the law, which forbids the rich as well as the poor to sleep under bridges, to beg in the streets, and to steal bread...For the first time, we are having an explicit exclusion of the poorest of poor and the most vulnerable. Procedure is also unequal and discriminatory."

She stated that the 103rd Amendment, through its 10% reservation for economically weaker individuals who nonetheless belonged to groups that did not suffer from inadequate representation, violated the foundations of the equality code and directly boosted the representation of groups that were already adequately represented, and thereby necessarily diluted the representation of the SEBCs that were the original beneficiary groups of the State's reservation policies. This violated the basic structure of the Indian Constitution.

Violation of Principle of Reparative Justice

Sr. Adv. Arora further submitted that economic disadvantage was neither entrenched nor enduring and in the absence of backwardness may even be temporary and could be solved simply by giving money. On the other hand, reservations expressed the principle of reparative justice and acknowledged the historic and ongoing oppression at a class level. She stated–

"An affront to the dignity of SEBCs, the target beneficiaries under Article 16(4), necessitates a specific, tailored response. Under our Constitutional scheme, this tailored response is reservations."

"To test your arguments, let's go to 15(3)- that is also immutable factor. For that there are no guard rails. Just to flag one possible way of looking at it- the original constitution also thought of reparative channel which did not have guardrails...Where is this safeguard or committee etc? When we bring it, we have to look at it holistically."

To this, Sr. Adv. Arora stated that the constitution envisaged that special legislations could be made for women and children as a class. Justice Bhat opined–

"Perhaps that's the answer that women are a class which are recognised and identified easily. That is the direction that Constitution makers took in original. It has to be understood in that context and provision of reservation was recognised. Perhaps the argument there is that it is a per se category that needed positive discrimination; that is where 15(3) comes."

She also highlighted that even in countries such as US or Canada, reservations were given on racial criteria and not economic criteria.

"We do not oppose any affirmative action and this is in alternative but in Jayshree Patil v. Chief Minister, it was held that there are other ways without diluting nature of reservations, such as horizontal reservations, which was done in cases of disabilities."

However, Justice Bhat interjected this line of argumentation and stated that once classes of horizontal reservations were looked at, all of them, be it gender, disabilities etc. would intersect. However, the same could not happen in the present case as there existed a clash and the non obstante clause had to be read down. The bench deliberated upon whether reading down was possible in the case.

The Vision of Constitution Makers

Senior Advocate Sanjay Parikh also argued for petitioners today. His arguments were primarily based on the vision of the constitution makers which was based on the equality of opportunity. He stated that the makers looked at certain things such as untouchability and decided that these were the people who required benefits in terms of reservation in public employment. He stated that the criteria utilised to provide reservations was of social backwardness because of the humiliation suffered by socially backward classes. He said–

"The entire emphasis was that there should be adequate representation of backward people, the idea was that they must come in main light and share state power. Thus it's not just violation of equality code but also violation of democracy which is basic feature of constitution. Reservation was by virtue of targeting those who suffered historic injustice. If we bring in any other criteria, we violate equality code and democratic structure."

While highlighting the relevancy of the Constitutional Assembly Debates, Sr. Adv. Parikh stated that judgements, including Jaishri Laxmanrao Patil v Chief Minister, Maharashtra (case for Maratha reservation), Indira Sawhney v. Union of India and M.Nagaraj & Others v. Union Of India- all highlighted the constitution debates and stated that the equality code was to be interpreted as per the debates.

He reiterated that reservations could not be on the basis of economic criteria which was not a part of the equality code under Article 14,15 and 16 of the Indian Constitution. He further submitted–

The petitions challenge the validity of Constitution (103rd) Amendment Act 2019. Economic reservation in jobs and education was proposed to be provided by inserting clause (6) in Articles 15 and 16 of the Constitution through the amendment passed by the Parliament in January 2019. The newly inserted Article 15(6) enabled the State to make special provisions for advancement of any economically weaker section of citizens, including reservations in educational institutions. It states that such reservation can be made in any educational institution, including private institutions, whether aided or unaided, except minority educational institutions covered under Article 30(1). It further states that the upper limit of the reservation will be ten percent, which will be in addition to the existing reservations. After the amendment was notified by the President, a batch of petitions were filed in the Supreme Court challenging the constitutional validity of economic reservation.