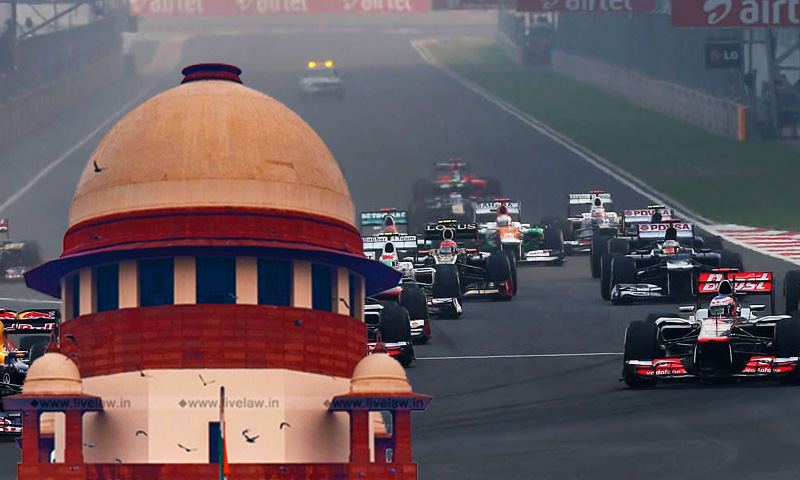 The Supreme Court on Thursday observed that the writ petition filed in 2011 challenging the entertainment tax exemption granted to Formula One Race held in India in 2011 and 2012 was not maintainable.The writ petition filed by one Amit Kumar had challenged the exemption granted by the State of Uttar Pradesh to the grand prix event held in Buddh International Circuit along Yamuna Expressway...

The Supreme Court on Thursday observed that the writ petition filed in 2011 challenging the entertainment tax exemption granted to Formula One Race held in India in 2011 and 2012 was not maintainable.

The writ petition filed by one Amit Kumar had challenged the exemption granted by the State of Uttar Pradesh to the grand prix event held in Buddh International Circuit along Yamuna Expressway in Gautam Buddh Nagar district of UP.

On October 21, 2011, a week before the race was scheduled, the Supreme Court had passed an order in the writ petition to direct the organizer of the event - Jaypee Sports International Ltd - to deposit the amount of entertainment tax payable by them. Accordingly, Jaypee Sports deposited Rs 24 crores in 2011.

Today, Senior Advocate Arvind P Datar, appearing for Jaypee Sports, urged the bench to allow the refund of the deposit as the writ petition was not maintainable.

Agreeing with Datar's objection to the maintainability of the writ petition, the Chief Justice of India said :

"Such a petition challenging tax exemption is not maintainable".

"How can you challenge tax exemption under Article 32?", CJI asked.

Datar clarified that the exemption was a statutory exemption granted under the U.P. Entertainment and Betting Tax Act, 1979, to promote the development of motor sport in India. Japyee Sports developed a world class F1 circuit at the allotted land in Gautam Buddh Nagar district and organized events for two years, Datar submitted. However, the events could not be held later on account of certain tax disputes, he added.

Since the Court is of the view that the writ petition is not maintainable, Jaypee Sports should be allowed to take back the amount deposited in 2011, Datar pleaded.

At this juncture, the standing counsel for the State of Uttar Pradesh opposed. The standing counsel submitted that Jaypee Sports had already collected entertainment tax amounts from the public while selling tickets for the event, and therefore, refunding the deposit to it would amount to "unjust enrichment".

Datar refuted this submission saying that Jaypee Sports never collected entertainment tax while selling tickets to public. Since there was tax exemption, tickets were sold without charging entertainment tax, the senior counsel submitted.  Datar also offered to file an affidavit in that regard.

Taking note of this factual dispute, the CJI-led bench ordered the concerned statutory authority under the U.P. Entertainment and Betting Tax Act to report to the court within 4 weeks after holding an enquiry as to whether Jaypee Sports actually collected entertainment tax for the event.

Jaypee Sport's claim for refund will be decided on the basis of such report.

The bench also recorded in the order its view that the petition was not maintainable.

The order passed by the bench, also comprising Justices AS Bopanna and V Ramasubramanian, observed :

"Having heard the matter, we are of the view of that petition under art 32 in the circumstances of this case might not be tenable. The learned counsel for the petitioner stated that the respondent who held the event of formula one racing has collected entertainment tax. The learned counsel further submitted that in these circumstance if the petition is dismissed as untenable, the respondent will be unjustly enriched. Shri Arvind P Datar, the senior advocate appearing for the respondent who held the Formula One race, states that the said respondent has not collected any amount towards entertainment tax from anyone for the event held in 2011 and 2012. Accordingly,the appropriate statutory authority under the UP Entertainment and Betting Tax Act will hold an enquiry and submit a report to this court whether the respondents have in fact collected entertainment duty in regard to the events in question. The said respondent will be at liberty to receive such evidence as appropriate for the purpose of enquiry before the said authority. Report to be submitted in four weeks".