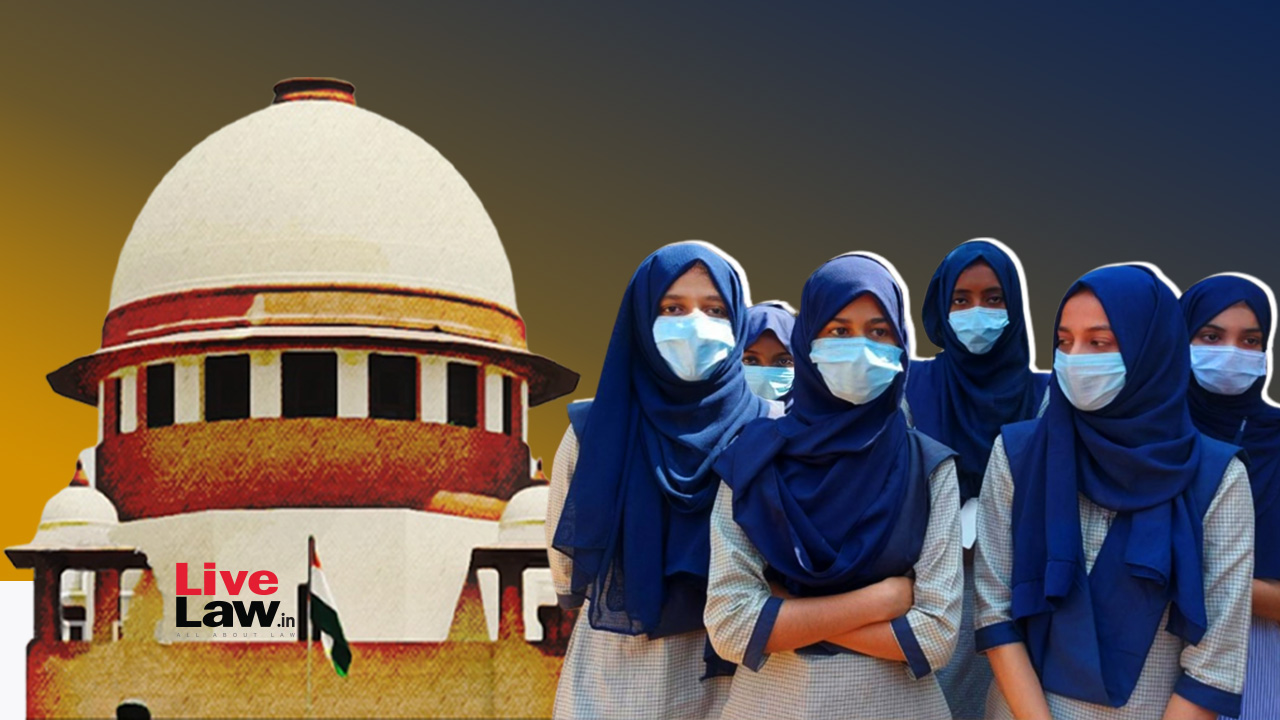 The Supreme Court, on Thursday, continued hearing the batch of petitions challenging the Karnataka High Court's judgment which upheld the ban on wearing hijab by Muslim girl students in some schools and colleges in the State. The matter was heard by bench comprising Justices Hemant Gupta and Sudhanshu Dhulia. Today, the arguments were commenced by Senior Advocate Devadatt Kamat whose...

The Supreme Court, on Thursday, continued hearing the batch of petitions challenging the Karnataka High Court's judgment which upheld the ban on wearing hijab by Muslim girl students in some schools and colleges in the State. The matter was heard by bench comprising Justices Hemant Gupta and Sudhanshu Dhulia. Today, the arguments were commenced by Senior Advocate Devadatt Kamat whose submissions pertained to Article 25 of the Indian Constitution, application of the Heckler's Veto in India, bonafide practice versus belligerent display of religion, difference between freedom of conscience and religion and; whether the Government Order was administratively sound. A detailed report of his arguments can be found here. The arguments of Sr. Adv. Kamat were followed by Adv. Nizam Pasha, who focused on the injunctions in Islamic law regarding hijab.

In order to answer the question of what was the test to be used for essential religious practice, Adv. Pasha quoted from the judgement in Commissioner, Hindu Religious Endowments, Madras v. Sri Laskhmindra Thirtha Swamiar of Sri Shirur Mutt, AIR 1954 SC 282 and stated–

"The Attorney-General lays stress upon clause (2)(a) of the article and his contention is that all secular activities, which may be associated with religion but do not really constitute an essential part of it, are amenable to State regulation."

Stating that the above argument of the Attorney General that only essential practices of religion were protected under Article 25, was rejected by the seven judge bench in the Shirur Mutt case, he further quoted from the judgement–

"The contention formulated in such broad terms cannot, we think, be supported. In the first place, what constitutes the essential part of a religion is primarily to be ascertained with reference to the doctrines of that religion itself."

He submitted that it was in the judgement of Durgah Committee, Ajmer v. Syed Hussain Ali and Ors, where a five judge bench had formulated the essentiality test. He further stated that the law on essential practice was merely by way of an obiter in the said judgment. Continuing his arguments, and highlighting the dilemma of whether all religious practices or only essential religious practices were protected, he stated–

"The question whether all religious practice or only essential religious practice are protected is a question on which 7-judges, 5-judges and 3-judges have taken different views. In Bijoe Emmanuel, 3-judges held that any belief which is held conscientiously held is protected. So not just essential practices, but any practice which is conscientiously held is protected. So this put your lordships in a dilemma. There is variance between 7-judges and 5-judges and the 9-judges bench is now examining."

Before referring to the scriptures, Adv. Pasha gave a word of caution to the bench which was resounded by 5-judges in Babri Masjid judgment. He stated that in the Babri judgment, the court did not enter into an area of theology and said that the true test was to see if a true believer holds that belief. Thus, as per the judgement, the Court must steer clear out of adopting one among the many interpretations of theological doctrines. He quoted from the Babri judgment–

"Our court is founded on Constitutional order and we must reject the attempt to lead the Court into interpretation of religious doctrines."

He further submitted that–

"Law is laid down on the interpretation of religious scriptures. There are multiple sects and multiple views in religion and each individual's understanding of scripture must be protected. In Shayra Bano case, the Court did not interpret scriptures. It was only the judgment of Justice Kurian Joseph which proceeded on scriptures. The majority judgment went by the statute."

Adv. Pasha, in the post-lunch proceedings on the matter, commenced his submissions by elaborating upon Mohammedan Law. He stated that the sources of Mohammedan Law were – Quran, Sunna of Hadis (sayings and traditions of Prophet), Ijma and Qiya. He argued that the High Court had misinterpreted Islamic verses to hold that Hijab was not mandatory.

a) "No compulsion" was in context of conversion to Islam

Adv. Pasha submitted that the High Court had referred to an unrelated verse, which stated that nobody can be compelled to convert to Islam, to hold that Hijab was not mandatory. At this juncture, Justice Gupta asked Adv Pasha to show the bench the verses holding Hijab as necessary. Here, Adv Pasha referred to Surah An-Nur Ayat 31 (24:31 Quran).

"Therefore, it is on a misreading of this footnote that the High Court concludes that wearing of Hijab is recommendatory."

Pasha : The author (Abdulla Yusuf Ali) is saying jilbab is not compulsory

Justice Dhulia : The scholar is saying regarding jilbab, God is forgiving, and it is not regarding Hijab. But the High Court has taken it as about Hijab?.

Pasha : That is right.#Hijab #SupremeCourt

He further submitted that the High Court had held Hijab as not mandatory due to absence of prescription of penance or penalty. He stated that this was a misunderstanding as well because–

Pasha : The High Court says Hijab is not mandatory due to absence of prescription of penance or penalty. That is a misunderstanding. There is no temporal punishment for a spiritual disobedience. Religion has spiritual implications for after life.#Hijab #SupremeCourtOfIndia

Adv. Pasha thus submitted the commentaries cited by the High Court were used in the wrong context. He said that stating that with the passage of time certain verses of Quran had lost meaning was blasphemous– "For believing Muslims, Quran is perfect for all the times to come. So to say the verses have lost meaning with time is bordering on blasphemy."

He further referred to Hadis and stated–

"When the Prophet is quoted as saying veil is more important, and when the Quran says follow the prophet, nothing more is required to show it is essential...The High Court questioned the translation placed by Muhammad Muhsin Khan, doubting his credentials. But the other side never disputed his credentials. This is something which found its way to the HC judgment on its own...That way Abdulla Yusuf Ali (whose translation was relied on by the HC) was not even a Sunni."

Pasha : For believing Muslims, Quran is perfect for all the times to come. So to say the verses have lost meaning with time is bordering on blasphemy.

Adv. Pasha also stated that the High Court had opined that whatever was said in Quran could not be mandatory and had cited the example of Triple Talaq. Here, he submitted that Triple Talaq was not mentioned in Quran or even in Hadis, so this was an irrelevant comparison.

Adv Pasha, in his arguments, referred to portions in the High Court judgment which stated that Hijab was at best a cultural practice. He said that–

"This finding is not borne out by anything but it is the finding of the learned judges themselves. Opinions of commentators are cited, but even that does not support the conclusion, leave aside the verse."

However, he continued this line of argumentation by submitting that as per Article 29(1) of the Indian Constitution, even cultural practice were protected. He stated–

"Justice Gupta mentioned in morning wearing of turban as cultural. It is protected. Wearing of hijab, even if regarded as cultural, is protected...If a Sikh has to wear a turban, and he is told not to come to school if he wears turban, it is violative."

However, Justice Gupta intervened stating that a comparison with Sikh may not be proper as the five Ks of Sikhism (Kesh, Kara, Kanga, Kaccha, Kirpan) had been held to be mandatory. He stated that carrying of kirpan was in fact recognized by Constitution and thus these practices could not be compared. To this, Adv. Pasha remarked that only Kirpan was mentioned in Constitution and the other Ks were not mentioned.

Here, Justice Dhulia stated that there were judgments on other Ks being mandatory too. Adv. Pasha submitted that the exact same analogy applied to Islam as well as these practices were fundamental tenets of Islam. He said–

"I went to an all boys School, fortunately or unfortunately. And in my class, there were several Sikh boys who wore turban of the same colour of uniform. It has been established that it will not cause violation of discipline."

"There was a case in Punjab. A college run by SGPC. The condition of admission was that anybody who won't follow tenets of Sikhism can't get. A girl was denied admission on ground she trimmed her eyebrows and the matter is pending here...Please don't make any comparison with Sikhism. These are all practices well established, well engrained in the culture of the country."

Adv. Pasha continued his arguments and stated that–

"We are deluding ourselves if we think we are like France."

However, Justice Gupta did not agree with the line of argumentation and stated that– "We don't want to be at par with France or Austria. We are Indians and want to be in India."

Adv. Pasha continued his arguments by highlighting the negative impact of the Hijab ban on students and stated–

"Islam is also there for 1400 years and the Hijab is also present. A survey of Sikh students in France show how they felt humiliated to enter school. It showed how they lost their identity and how they wanted to leave the country. Even Muslims. Muslim students were negatively impacted."

However, the bench stated that the comparison provided by him was irrelevant. Adv. Pasha concluded his arguments of the day by referring to verses in Quran which state that Quran mandates respect towards other religions–