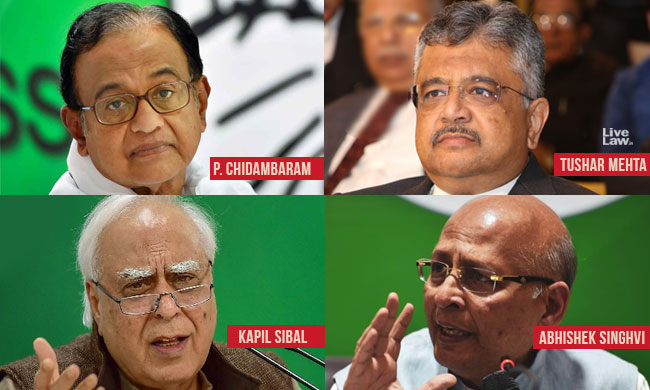 (Updated with observations of the judge in the order)

CBI Special Judge Ajay Kumar Kuhar at the Rouse Avenue, Delhi has remanded former Union Home and Finance Minister P Chidambaram to the custody of Central Bureau of Investigation till August 26 in the INX media case.

The Central agency had sought 5 Days custody of Chidambaram to unearth the money trail in the alleged money laundering case.

The order was pronounced after hearing arguments of Solicitor General Tushar Mehta for CBI, and Senior Advocates Kapil Sibal and Dr A M Singhvi for Chidambaram, which lasted for nearly two hours.

The CBI judge said in the order that allegations were "serious in nature" and a "detailed and in depth investigation is required in the case".

"The allegations of payment being made to the accused in the year 2007-08 and 2008-09 are specific and categorical. The trail of this money if so paid is to be ascertained. No doubt it is a case based on documentary evidence but those documents need to be traced and their value and their worth for the purpose of the investigation in this case is to be ascertained".

"The enormity of money allegedly involved in the case and the persons who are accused necessitate an in depth investigation...The investigation needs to be brought to a logical end and for that purpose, the custodial investigation is sometimes found useful and fruitful", stated the order of the Court.

The Court has granted his family and lawyers permission to meet him for half an hour everyday. There should be medical examination of Chidambaram every 48 hours, added the Court.

"It is to be ensured that the dignity of the accused is not violated", Court said in the order.

The Solicitor General essentially argued that Chidambaram had been evasive and non-cooperative during the probe in the high magnitude corruption case.  The adverse findings entered by Justice Gaur of Delhi High Court against Chidambaram while rejecting his application for pre-arrest bail were also relied on by the Solicitor General.

Sibal and Singhvi denied that Chidambaram had been evasive. He has the Constitutional right to remain silent. The case is based on the confession of a co-accused Indrani Mukherjea, founder of INX group, who turned approver. Approver's statement is a weak piece of evidence.  Chidambaram has not been summoned since July 2018. The sudden rush for arrest is motivated by extraneous reasons, they argued.

The FDI clearance for INX media was granted by Foreign Investment Promotion Board (FIPB). Chidambaram, as the then Finance Minister, merely approved the FIPB decision in ordinary course of business. It was a collective decision. However, CBI has not arrested or questioned any officers of FIPB. There is no whisper of allegation in the FIR that Chidambaram has received illegal gratification as a quid pro quo for the INX FDI clearance, submitted the senior lawyers for Chidambaram.

Chidambaram also got opportunity to make brief submissions during the hearing. He said that he did not leave any question unanswered and denied the allegation of receiving 5 million US dollars kickbacks.

A detailed account of the hearing may be read here.

Speaking to the media after the court order, Karti Chidambaram said "This is going according to the script. I've been through the process and I can see the pattern".

Chidambaram, who is presently a member of the Rajya Sabha, has been accused of committing offences under Prevention of Corruption Act and Prevention of Money Laundering Act in respect of INX Media investments. Both the CBI and Enforcement Directorate have lodged cases against him in 2017 and 2018 respectively.

He was arrested by the central agency from his residence at Jor Bagh, Delhi and was taken to the CBI Head Quarters on Wednesday night around 9.30 PM, after a dramatic press conference held by him at the Congress office in national capital an hour ago.

The confession made by Indrani Mukherjea, former head of INX media group, that money was routed through companies linked to Karti for FIPB approval was cited by the CBI against Chidambaram. Mukerjea, who is at present in Mumbai's Byculla jail in the Sheena Bora murder case, had given her confession before the Magistrate under Section 164 of the Code of Criminal Procedure.

Ever since the Delhi High Court had rejected his application for pre-arrest bail on August 20, the CBI had been attempting to execute the arrest warrant issued against him, while his lawyers sought urgent listing of the matter before the Supreme Court. CBI had reported that the MP had been evading arrest and a lookout notice was issued against him.