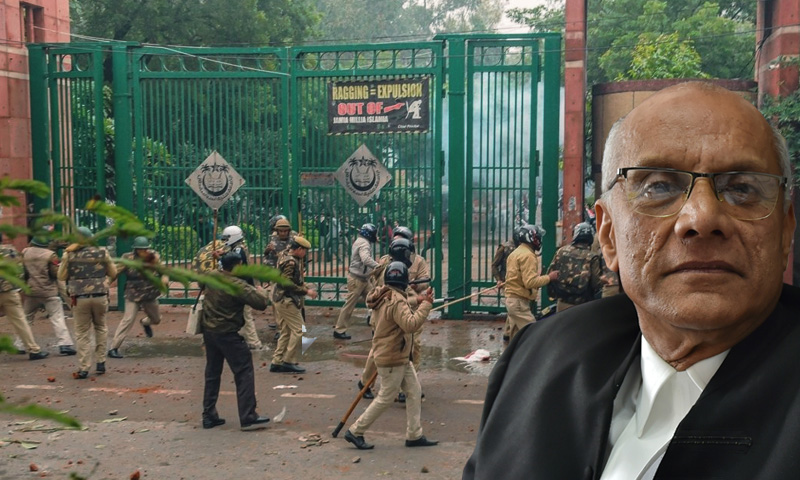 The police unleashed brutalities on the students of Jamia Milia Islamia, Delhi, in December 2019, to deter them from participating in protests against the Citizenship Amendment Act, submitted Senior Advocate Dr Colin Gonslaves in the Delhi High Court on Monday.Appearing for one of the petitoners seeking independent inquiry into the alleged police brutalities, he submitted before a division...

The police unleashed brutalities on the students of Jamia Milia Islamia, Delhi, in December 2019, to deter them from participating in protests against the Citizenship Amendment Act, submitted Senior Advocate Dr Colin Gonslaves in the Delhi High Court on Monday.

Appearing for one of the petitoners seeking independent inquiry into the alleged police brutalities, he submitted before a division bench of Chief Justice DN Patel and Justice Prateek Jalan that the students were planning to hold a march to the Parliament, which infuriated the police.

"The purpose of the violence was to threaten students to never to participate in such protests again. This was done to send a message to students to not to embarrass the govt by marching to the Parliament", he submitted.

He submitted that the police had entered the campus, without taking requisite permission from the authorities. There was firing inside the University halls, and many students got attacked with rubber bullets. Police entered the library, hostels and even the mosque; male police officers also entered the women's hostel.

"'This is literally like a war against students", he said.

Gonsalves informs the court that one of the LLM students, who was studying in library, has now turned blind due to the lathi blow given by the police@DelhiPolice #JamiaViolence #AntiCAA

He said that announcements were made from the mosque inside the campus urging the police to stop the attack, which was not heeded to. Communal slurs were used against students. They were called "anti-nationals" and were asked to go to Pakistan for "azadi".

Before they started beating up the students, the police broke the CCTV cameras inside the central library.

Gonsalves then read out from the testimonials of students recorded by several activists, which contained allegations of police brutalities. He informed that these testimonials were submitted before the National Human Rights Commission.

"This police brutality has communal overtones. They've attacked a minority institution which was protesting against the CAA. It is not a riot, but police brutality", he submitted.

He further said that the police attacked even the Imam of the mosque.

"Police dragged me by the neck, attacked me on my back with lathis", he read out from the Imam's testimony.

Gonsalves further alleged that the police indulged in the destruction of public property to give out an impression that the students' protests were violent.

As per the video, the police was seen going near the bus with some liquid, he said.

"Police itself put the bus on fire to support a false narrative that the students had indulged in arson", he submitted.

He also played a video containing visuals of police barging into the library and beating up students.

Gonsalves further argued that the investigation was "one-sided" and not fair.

Many students who suffered injuries have been charge-sheeted. But not even a single police officer has been named in the charge sheet.

"As per their charge sheet, shouting slogans is illegal but beating up students involve no criminality", he submitted.

'As per their chargesheet, shouting slogans is illegal but beating up students involve no criminality', Gonsalves argues@DelhiPolice #JamiaViolence #AntiCAA

He also slammed the NHRC's report, and said that it was "highly diluted". Even the compensation ordered by the NHRC has not been paid to the students who sustained injuries, he said.

"No wonder the SC called it (NHRC) a toothless tiger", he submitted.

Gonsalves insisted that an independent inquiry should be ordered, completely excluding the police.

He also submitted that such a relief cannot be granted by the Magistrate under Section 156(3) of the Code of Criminal Procedure.