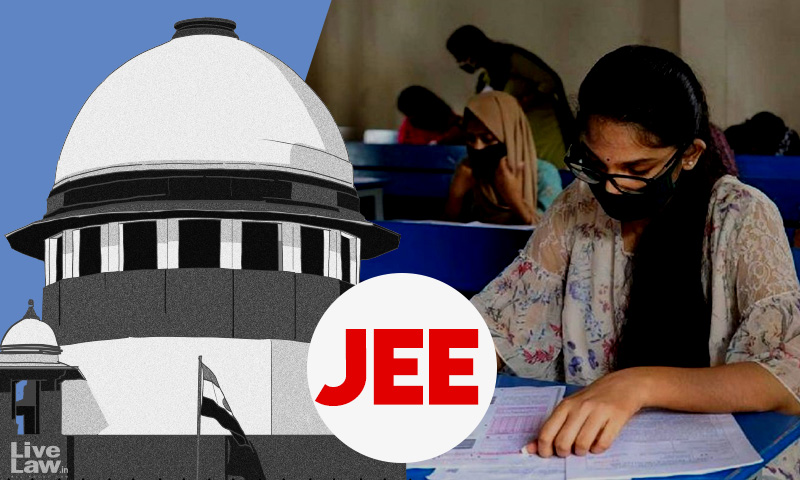 The Supreme Court on Wednesday disposed of a writ petition filed by students who have qualified JEE Mains 2021 in their 3rd attempt seeking accommodation to appear for JEE (Advanced) Exam 2021 scheduled to be held on October 3, 2021.

A bench comprising Justices AM Khanwilkar, Dinesh Maheshwari and CT Ravikumar disposed for the writ petition by allowing the petitioners to make a representation before the competent authority of the Joint Admission Board, JEE (Advanced). The bench said that it will be open for the authorities to take a decision on the request made by this category of students.

"If there is some way forward, you may consider it. You can reconsider your policy", the bench orally told Advocate Sonal Jain, who appeared for the JEE authority.

The petitioners are a group of students who have successfully cleared the JEE MAINS Examination in 2021. However they are aggrieved by clause 4 in the JEE Advance brochure that requires a candidate to take the examination ONLY within 2 years of clearing their 10+2 or equivalent exam though age limit as per clause 2 is 25 years.

Filed through Advocate on Record Sumanth Nookala, the petition sought to declare ineligibility prescribed in criterion 4 of clause 11 ("impugned criteria") in the JEE (Advanced) Information Brochure insofar as it renders candidates who cleared class XII in 2019 ineligible from being able to sit for JEE (Advanced) even after qualifying JEE Mains as arbitrary and violative of Article 14.

Advocate Sumanth, appearing for the petitioners, submitted before the bench that according to information brochure, only those cleared the Class 12 exam in 2020 and 2021 can appear in JEE Advanced this year. The petitioners, who passed Class 12 exam in 2019, are disqualified from attending JEE Advanced, although they are within the prescribed age-limit. This, the counsel argued, was arbitrary.

The petitioners' lawyer referred to an RTI reply to submit that nearly 12,000 students will be excluded from JEE Advanced due to this condition. If a mere 12000 more candidates across India are allowed to appear for the 2021 Advance examination, it will not be a logistical nightmare.

The counsel argued that the attempt made by petitioners in JEE Advanced in 2020 should not be counted as an attempt, as the exam took place under the difficult situations created by the COVID pandemic. They failed to perform well in 2020 attempt due to the pandemic and lockdown issues, the counsel argued.

The bench said that it cannot interfere with a policy decision taken by the examination authorities.

"It is a policy matter. How can we relax? You make a representation before the appropriate authority. It is for them to decide if the policy needs a re-look", Justice Khanwilkar orally told the petitioner's counsel.

The counsel for the JEE authority submitted that the Supreme Court had refused to entertain a similar petition filed earlier(Jajati Panda and others v. Union of India, WP(c) 1349/2020).

The bench told the examination authority's counsel that they can see if the issue needs to be reconsidered in the light of changed circumstances.

The bench disposed of the petition with the following order :

We are not expressing any opinion with regard to the correctness of the complaint made in the petition.

Let the representation be decided by the second respondent expeditiously, preferably before the closing date for application for submission of Advanced Exam, 2021".

Arguments in the petition

It had been argued that only with effect from JEE-2006 a policy decision was taken that candidates will be permitted to appear in JEE only in the year in which he/she passes the qualifying examination and/or in the following year and incorporated as criteria 4.

"The rationale behind such a decision is purportedly hinged on the premise that equals should compete. Though sound, by efflux of time the said policy has become manifestly arbitrary and warrants interference by this Hon'ble Court. The exam pattern in 2006 and 2020 is different. JEE in 2006 was one composite exam with uniform eligibility conditions. From around 2020, JEE Mains conducted by the National Testing Agency was adopted as a screening test which permits 3 attempts from qualifying exam but JEE Advance maintains at 2 attempts. Secondly, when the age limit prescribed in Criteria 2 is about 25 years and applicants becoming eligible at 23 and 24 years are also permitted, continuing the restriction of two attempts within two years is manifestly arbitrary and unjust," petition stated.

Students had also contended that the "attempted" exam by them and other similarly situated persons was a "coerced attempt" and not one given out of free will in hospitable and respectable circumstances as it ought to have been.

They had virtually no choice but to appear for the examination as they were bound by Criteria 3 and 4 of the JEE (Advanced) Brochure which disallows more than 2 attempts, the students had also averred.

Referring to Delhi High Court's decision wherein it had opined that an "attempt" in the context of competitive entrance examinations must be a meaningful attempt "beyond mere attendance" and must be such that the participant can truly realise and perform to their potential, students have averred that their plight of the petitioners and that of all others similarly situated made the JEE(Advance) 2020 a mere shoddy attempt and not a "real" attempt which could enable the students to actualise their potential.

Relying on the reply to RTI dated July 20, 2021 the petitioners had averred that through 2.5 lakh become eligible for Advance each year, about 12 thousand are excluded because of impugned criteria and only 2.4 lakh are permitted to take JEE Advance Exam.

The petitioner in their writ had also referred to the Top Court's direction passed in Jajati Panda and Ors v Union of India and Ors which pertained to extra attempt for JEE Advanced Examination 2021.

"In this case the gross irregularities in the conduct of the JEE Advanced Exam 2020 inter alia was brought to the attention of the court. Several candidates had missed the examination owing to multiple State-Wide lockdowns and the attempt was not meaningful," the petition states.