Judges Should Be Free To Decide By Law Not By Popular Opinion, The Terms Like "Judicial Barbarism" Must Be Condemned: Law Minister 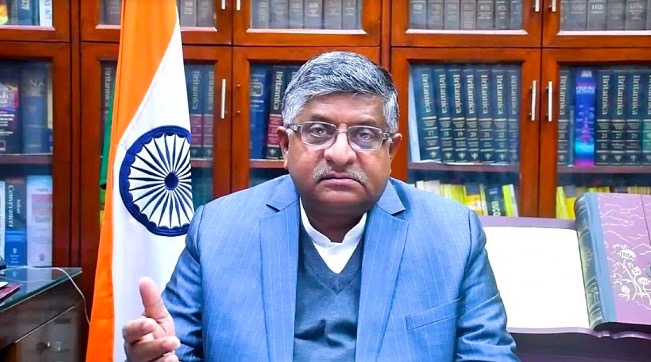 Delivering his address at the Constitution Day function organised by Supreme Court , the Union Minister for Law and Justice, and Electronics, Information Technology and Communications, Ravi Shankar Prasad, spoke of "fair criticism" of the judiciary and the "disturbing trend" which has emerged of late and which he "wished to flag"."There is criticism of several things, like the...

Delivering his address at the Constitution Day function organised by Supreme Court , the Union Minister for Law and Justice, and Electronics, Information Technology and Communications, Ravi Shankar Prasad, spoke of "fair criticism" of the judiciary and the "disturbing trend" which has emerged of late and which he "wished to flag".

"There is criticism of several things, like the collegium...but lately people have views on what the judgement on any petition that is filed should be..there are narratives in the newspapers...and if the judgement is not in conformity with such views, there is criticism", he expressed.
"The judges should be free to decide by the law. The founding fathers did not perceive the justice delivery to be as per popular opinion", he continued.
"The use of such terms as 'judicial barbarism' should be condemned, regardless of the stature of the person using them...we must remember that it is the judiciary which has held the hand of the poor and the underprivileged, and even though they might have been shortcomings, criticism was not transgress the boundaries of propriety...we must be proud of the judiciary", he urged.
He spoke of the "stellar role of the Supreme Court as the beacon of freedom and the arbiter of disputes and its endeavour towards fastening equality". "Post-Independence, there were challenges of caste, religion, communal, language, regional conflicts, and the Supreme Court came out with judgements which we all respect", he said. He appreciated the contributions of the Supreme Court towards the injunction against arbitrariness, on its emphasis on the procedure of law, for the purpose of Article 21, to be fair, reasonable and just.
"The Basic Structure of the Constitution has to be seen in totality...The independence of judiciary is very important and the separation of powers is equally relevant", he expressed.
The Minister congratulated the Supreme Court and the courts of India for having risen to great heights in facing the challenges of the pandemic. He cited how till October, 30,000 cases have been disposed off by the Supreme Court, 13.74 lakh cases by all the high courts in the country and 35.93 lakh by the district courts across the nation. "Close to 50 lakh cases in total have been disposed off, and I am not even including the tribunals and the other virtual hearings in this. As the law minister, I wish to compliment the Chief Justice of India, the Supreme Court judges, the law officers, the lawyers, the Chief Justices of High Courts and other judges and the judges of the subordinate courts for having extracted a great opportunity out of these inhibiting circumstances and for rising to the occasion to ensure justice delivery", he said. He spoke of the development of technological footprints across the country in the form of 16,000 digital courts etc.
"The first thing to reflect in these times is the fundamental duty to care for others. Corona teaches us that while remembering rights, we must also remember the correlative duties", he continued.
"In the 71 years of the Constitution, India has emerged as a mature democracy, vindicating the faith of the founding fathers, even in the face of income, educational, caste, community, language barriers. The 1.3 billion people of the country have the power to change the government by franchise...The founding fathers invested great significance in made preserving the heritage, they rejected the British Empire and the idea of India was given by them, incorporating the ideals of the vedic age, even the story of Rama and Krishna, the glory of kings from Asoka to Akbar, the morals of Mahatma Gandhi to Subhas Chandra Bose and Shivaji, and ensuring that all these virtues form part of the Constitution", he elaborated.
Finally, he concluded, saying, "The COVID vaccine is to come, and whenever it comes, I hope that the medical fraternity must be the beneficiaries of the vaccine in the first instant. After all, it has been their efforts which have saved life"