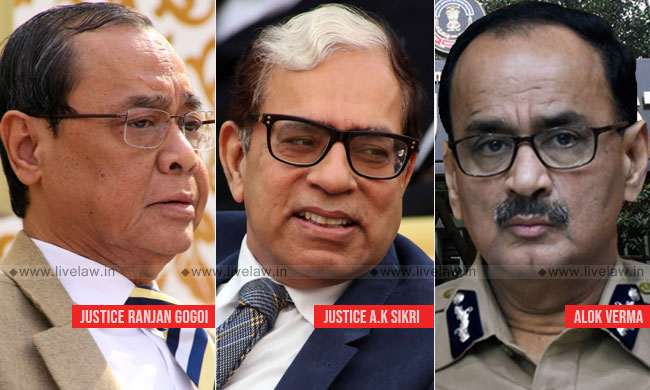 The Chief Justice of India Ranjan Gogoi has nominated senior most SC Judge Justice AK Sikri to be part of the high powered committee under to consider the allegations against CBI Director Alok Verma to avoid the conflict of interest in the Case.

Apart from the Prime Minister, the Leader of Opposition, the committee also includes the Chief Justice of India or Judge of the Supreme Court nominated by him.  Since  the Judgment re-instating Alok Verma as CBI Director was authored by CJI Gogoi, he nominated another Judge to participate in the proceedings relating to Alok Verma.

In the judgment authored by CJI, on behalf of the three judge bench, which quashed the Central Government and CVC orders against Alok Verma, the issue of divestment of power and authority of the Director, CBI was kept open for consideration by the Committee. The bench had required the matter to be considered by the Committee under Section 4A (1) of the Delhi Special Police Establishment Act, 1946 within a week.

While quashing the orders against Alok Verma, the Supreme Court had issued this clarification: "We deem it proper to direct that the petitioner Shri Alok Kumar Verma, Director, CBI, upon reinstatement, will cease and desist from taking any major policy decisions till the decision of the Committee permitting such actions and decisions becomes available within the time frame indicated. We further make it explicit that the role of the Petitioner Shri Alok Kumar Verma as the Director, CBI during the interregnum and in terms of this order will be confined only to the exercise of the ongoing routine functions without any fresh initiative, having no major policy or institutional implications. "