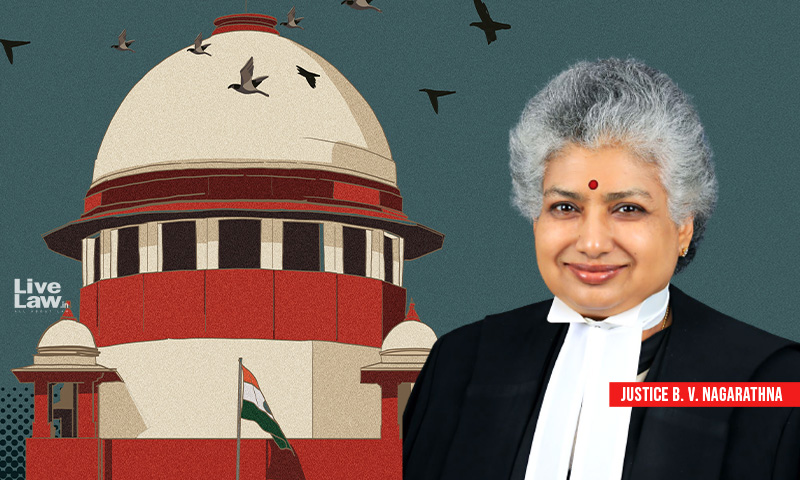 The long wait for the first woman Chief Justice of India might find an end with Justice B V Nagarathna, who is in the line to become the CJI in September 2027 as per the seniority list.Her tenure as the CJI will be for only 36 days, if appointments go as per the seniority turn.Justice Nagarathna, daughter of former Chief Justice of India ES Venkataramiah, was enrolled to the Bangalore Bar...

The long wait for the first woman Chief Justice of India might find an end with Justice B V Nagarathna, who is in the line to become the CJI in September 2027 as per the seniority list.

Her tenure as the CJI will be for only 36 days, if appointments go as per the seniority turn.

Justice Nagarathna, daughter of former Chief Justice of India ES Venkataramiah, was enrolled to the Bangalore Bar in 1987. She was appointed as an Additional Judge of the High Court of Karnataka on 18-2-2008 and permanent Judge on 17-02-2010.
During her stint as a judge of the Karnataka High Court, she has pioneered the cause of social welfare, ensured the right to education for children and protected the rights of the marginalized. These are apart from her notable judgments interpreting the law in complex issues relating to companies act, civil litigation and criminal trials.
Call made for law to protect children in illegitimate marriage
She has been instrumental in upholding and protecting the rights of children. In her judgment dated June 24, 2021, in the case of K Santosha And The Karnataka Power Transmission Corporation Limited she made an appeal to the Parliament to amend the law to protect the rights of children born out of an illegitimate marriage.
"Of course, it is for the Parliament to legislate on the conferment of legitimacy on children born out of the void or voidable marriages under the personal law other than the Hindu Marriage Act and the Special Marriage Act. But, for the limited purpose of this case, we find that children born out of void and voidable marriages under other personal laws, where there is no provision for conferment of legitimacy, must also have equal protection of the law by treating them on par with children born out of void and voidable marriages under the Hindu Marriage Act or the Special Marriage Act, 1954, insofar as the appointment on compassionate basis is concerned", the judgment stated.
She had added "No child is born in this world without a father and a mother. A child has no role to play in his/her birth. Hence, law should recognise the fact that there may be illegitimate parents, but no illegitimate children".
Quashing of NLSIU's domicile reservation
Justice Nagarathna authored the judgment which quashed the Karnataka amendment which introduced 25% domicile reservation in the National Law School of India University, Bengaluru(Master Balachandar Krishnan v State of Karantaka).
In her judgement, Justice Nagarathna said "NLSIU was a unique national institution and cannot be construed to be a State University".
Junking the State government's contention that the reservation is intended to ensure that some of the students graduating from the Law School will remain in Karnataka, her judgment had observed:

"Moreover, in today's Indian economic ethos, where liberalisation, privatisation and globalisation is the triple mantra, particularly after the reforms in the economy post 1991, it is unfair to expect Karnataka students to remain in and practice in Karnataka only. Their aspirations cannot be confined to Karnataka, when opportunities are available in other parts of India and overseas. They cannot be tied to this State alone, when avenues are available all over India as well as abroad for higher education or for professional work. Therefore, any horizontal reservation provided to students of Karnataka would not advance the State's interest. There is no compulsion for students of Karnataka to remain in the State nor can such a promise be imposed on them for the purpose of fostering the impugned reservation as it would violate their freedom under Article 19(1)(g) of the Constitution".

Pioneering the cause of education of children

Justice Nagarathna's directions brought out the ugly face of digital-divide which hindered the right to education amid the pandemic.

The survey report indicated that 24.50 percent of students do not have access to the technology to attend e-classes.

Justice Nagarathna in her order dated July 15, while directing the State government to come out with an action plan to bridge the technological divide, said, "economic backwardness or poverty should not become a reason for lack of continuity in education".

Similarly, her concern for providing basic education to students in the rural/remote areas of the state was evident from her order in the case of Anti-Corruption Council of India And The State of Karnataka. In its order dated July 1, the court noted "One of the reasons why children don't like schools is because of the environment there, walls are broken, leakages are there, no water supply, no electricity, etc. especially in rural areas."

The court in this matter has called upon certain expert groups to assist in forming a road map for spending the Rs 100 crore budgeted by the government for government/aided school infrastructure in a proper manner.

Justice Nagarathna has through her orders shown special concern for the girl child. She has passed directions to ensure the implementation of the SUCHI scheme, under which sanitary napkins are distributed to adolescent girls studying in schools.

Justice Nagarathna in her order dated April 1, had said "Providing separate toilets for girls and hygiene by way of providing sanitary napkins to adolescent girls, is an instance of empowerment. If you want to empower young women and young girls, provide these facilities."

"In our view provision of separate toilets for adolescent girls in schools and provisions of sanitary napkins to such adolescent girls on regular basis are all instance of not only empowerment of girl child but also a step in implementation of Article 21-A, in so far as girls between age of 6 to 14 years are concerned", she ordered.

The bench headed by her also issued directions to summon the concerned Health Secretary after noticing lapses in the implementation of the scheme.

In her order dated July 27, 2021, in the case of Pramoda And The State of Karnataka, Justice Nagarathna upheld the decision of the Deputy Commissioner of Udupi District by which it had reserved two land parcels for construction of a girls' hostel for students after matriculation.

The court had observed "At the outset, we think that the object and purpose for which reservation of the two parcels of land have been made vide order of the second respondent dated 30/03/2021, is a purpose which is in consonance under Article 15(3) of the Constitution of India, in as much as it is for the purpose of providing residence to girl students, who wish to pursue their studies beyond matriculation. Therefore, we cannot find fault with regard to the purpose for which the reservation has been made".

POCSO accused not entitled to bail merely because of delay

A division bench led by Justice Nagarathna, while answering a reference, held that non-compliance of section 35 of the Protection of Children from Sexual Offences (POCSO) Act, will not entitle the accused to be released on default bail.

The court had said, "The object and purpose of Section 35 of the POCSO Act is to ensure that the victim child is secured from the trauma of trial of the case at the earliest so that she or he could be rehabilitated and reintegrated into society at the earliest. The said provision is not to be interpreted in favour of the accused so as to mandate release of the accused, if for any reason, evidence is not recorded within a period of thirty days of taking cognizance of the offence or the Special Court not completing the trial within a period of one year from the date of taking cognizance of the offence."

Securities created in 'Coffee plantations' can be enforced for the realization of debts as coffee plantations would not come within the scope and ambit of agricultural land, under the SARFAESI Act, insofar as the State of Karnataka is concerned. (U M Ramesh RaoAnd Union Bank of India, Case No: WA 538/2020)

Mere receipt of financial benefits due to death of an employee will not disentitle dependents from seeking compassionate appointment. (Kiran P And The CommissionerBangalore Development Authority, WA 8/2020)

Holding that "consideration of a representation made by a detenu, post confirmation of the order of preventive detention is to be read into the principles of natural justice and also Article 21 of the Constitution", Justice Nagarathna issued guidelines on consideration of detenu's representation. (Rizwan Pasha And Commissioner of Police, WPHC29/2021).

Period prior to April 1, 2014 cannot be taken into consideration for disqualification under Section 164(2)(a) of the Companies Act. The petitions challenged the list published by the Ministry of Commercial Affairs in September 2017, disqualifying nearly three lakh directors under Section 164(2)(a) and Section 167(1)(a) for failing to file annual returns and statements for a period of three consecutive years. (Yashodhara Shroff and Union of India).

Justice Nagarathna was also part of the bench led by Chief Justice AS Oka which monitored the COVID-19 management in the state. The bench passed several directions for the welfare of migrant workers affected during the lockdown.