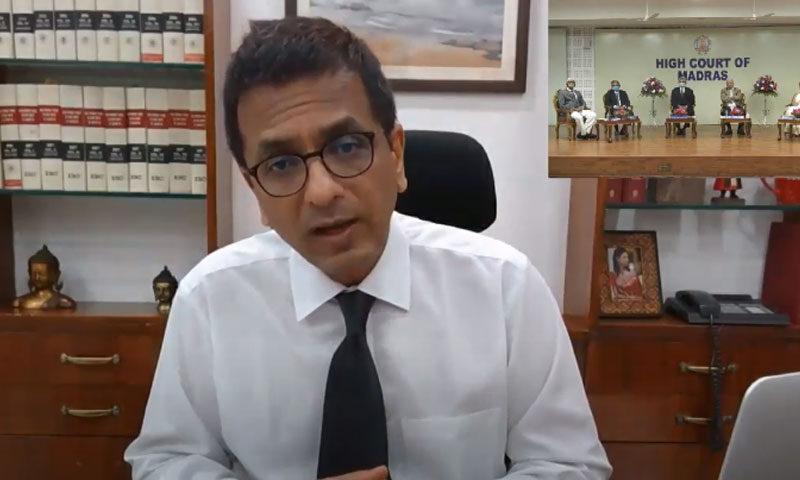 Requesting Chief Justice Rafiq's to take corrective measure and acknowledging the efforts taken by the High Court to ensure the availability of a virtual platform, Supreme Court e-committee Justice Chandrachud has asked for his personal intervention and oversight in this regard.

"In the event advocates and litigants are facing issues with video conferencing solution provided by your High Court which is impeding their right to access justice effectively, I request you to take corrective measures."

The letter dated May 28 further states that Supreme Court's e-committee is working on adopting one video conferencing solution for all courts across India, however, in the meanwhile, the letter adds, till such a uniform system is evolved, courts must ensure that a robust and user-friendly video conference solution is available to users for effective hearing of court proceedings.

In this backdrop, the letter reiterates that until we eventually provide one-stop solution for all High Courts, certain steps can be taken for facilitating Judicial work.

Lastly, the letter by Justice Chandrachud avers that any kinds of financial requirements necessary to procure suitable video conference solution like licenses or upgrading existing systems could be raised with the e-committee via Ramesh Babu Member, Project Management, E Committee.

This letter by Justice Chandrachud comes in the backdrop of a letter written to Supreme Court e-committee chairperson, Justice DY Chandrachud, the Madhya Pradesh State Bar Council chairperson, Dr. Vijay Choudhary requested for the introduction of a more efficient and a user-friendly virtual hearing platform like Webex Cisco or Zoom be introduced in the Madhya Pradesh High Court to host virtual hearings.

The letter sought the urgent indulgence of the E-Committee of the Supreme Court for strengthening and promoting the virtual system of the hearings of the cases in Madhya Pradesh High Court.

The letter had submitted that the Madhya Pradesh High Court has been carrying out its virtual hearings on the 'Jitsi platform', which is neither user-friendly nor convenient for both lawyers as well as litigants.

"In the case of virtual Courts, the software and the applications that are being employed for convening virtual Courts must be completely user friendly, which meets all the desired expectations which make such virtual Courts efficient, non-interruptive and hassle-free."